HALIFAX — Guelph Storm general manager/head coach George Burnett won't call it the most difficult road a team has ever taken to get to the Memorial Cup.
0
May 16, 2019 12:07 PM By: Canadian Press 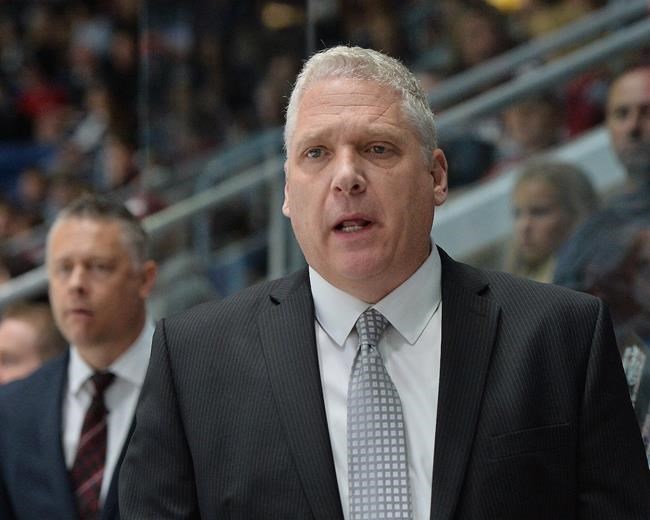 HALIFAX — Guelph Storm general manager/head coach George Burnett won't call it the most difficult road a team has ever taken to get to the Memorial Cup.

But he sure followed a much easier path the first two times he brought a team to the national major junior hockey championship.

The Storm had to overcome playoff series deficits of 3-0, 3-1 and 2-0 along the way in 2019, staving off elimination seven times against the top two seeds in the Western Conference before coming back against the Ottawa 67's in the Ontario Hockey League championship to reach this year's event.

They were the first-ever fourth seed from the OHL's Western Conference to win the J. Ross Robertson Cup.

"I can't speak for everybody else but it certainly had its ups and downs and momentum swings and a number of highs and lows, absolutely," said Burnett. "It's terrific to come out on top and I give the kids a lot of credit for staying resilient."

"The London and Saginaw comebacks were big for our confidence going into the final round ... There was no panic. They supported each other. The impression I get was, 'hey we were OK'. We can score goals and play better. Everybody did their part big or small."

Burnett, 57, has been to the Memorial Cup twice before, in 1998 with Guelph as OHL champion and in 2008 with the Belleville Bulls as an OHL finalist.

The two-time OHL coach of the year has coached nearly 1,500 games in his 22 seasons in the OHL and is currently fifth all-time in wins with 706, but has yet to capture major junior hockey's biggest prize.

"They're experiences you learn from, and make adjustments, but the league is considerably different than 10 years ago, certainly 21 years ago," Burnett said of his past Memorial Cup experiences.

"I don't think there's any question things have changed, the game's changed, but the experiences of a short-term event like the Memorial Cup, how you prepare for head-to-head matchups, focus on your own club, are the same."

Burnett made five trades between Jan. 4 and the Jan. 10 OHL trade deadline, helping bring Guelph to its sixth Memorial Cup appearance. The Storm went 22-5-3 down the stretch with just one loss on the road.

Burnett says he never intended to overhaul the roster the way he did, but the opportunities were too good to pass on. He focused not only on skill, but leadership and chemistry.

Entwistle and Gordeev played at one time for Burnett in Hamilton. Suzuki was a childhood friend of captain Isaac Ratcliffe, with the duo playing minor hockey together in London, Ont., before cracking the OHL and Phillips shares the same hometown as Burnett — Port Perry, Ont. Meanwhile, defenceman Jack Hanley, acquired in the pre-season, was drafted by Burnett in Belleville before the Bulls moved to Hamilton.

"There was a lot of familiarity there," said Burnett. "It had a lot to do with how we came together."

Fourth-year forwards Nate Schnarr, Cedric Ralph and Isaac, and goaltender Anthony Popovich are the veterans of the team, and were on the roster before Burnett returned as GM and coach in 2017. They began their junior careers following Guelph's 2014 Memorial Cup run and missed the post-season two years in a row, including the 2015-16 season, which was the organization's first absence from the playoffs since its inaugural season in 1991-92. Burnett felt he owed them a chance to compete with it potentially being the last year of junior for some.

"Those kids had been through the rebuild, reload, whatever you want to call it and this was an opportunity we needed to take," Burnett said.

Burnett coached Guelph to its first OHL championship in 1998 and was a goal away from winning the Memorial Cup before falling to the Portland Winterhawks 4-3 in overtime.

It turned out to be a one-and-done season as he took an assistant coaching position alongside Craig Hartsburg with the Anaheim Ducks for the next two seasons.

He returned to the OHL in 2000 and spent four years with the Oshawa Generals before joining Belleville in 2004, an organization he would stay with for 12 seasons, capped by the 2015-16 season when the Bulls relocated to Hamilton.

When turmoil struck the Flint Firebirds in the spring of 2016, including an investigation and eventual five-year suspension for owner Rolf Nilsen by the league after two controversial firings of a previous head coach, Burnett was appointed GM of the Michigan-based franchise by commissioner David Branch to help right the ship. The Firebirds made the post-season in the one season he was in charge.

"There's negativity out there but I think if people do their homework, they'll find out kids live in a wonderful area, (with) one of the top schools in the state and a wonderful facility to play at," said Burnett. "It's an organization that will make some waves moving forward. I don't want to speak for them but I think they're in good shape."

This year Guelph is the only team at the tournament that didn't crack the CHL top 10 rankings.

"We feel fortunate to end up on top, lots of hard work and we really feel there's more work ahead," said Burnett. "There's still one more to go."

Ex-Dodgers star Carl Crawford arrested on assault charge
Jun 5, 2020 12:31 AM
Comments
We welcome your feedback and encourage you to share your thoughts. We ask that you be respectful of others and their points of view, refrain from personal attacks and stay on topic. To learn about our commenting policies and how we moderate, please read our Community Guidelines.