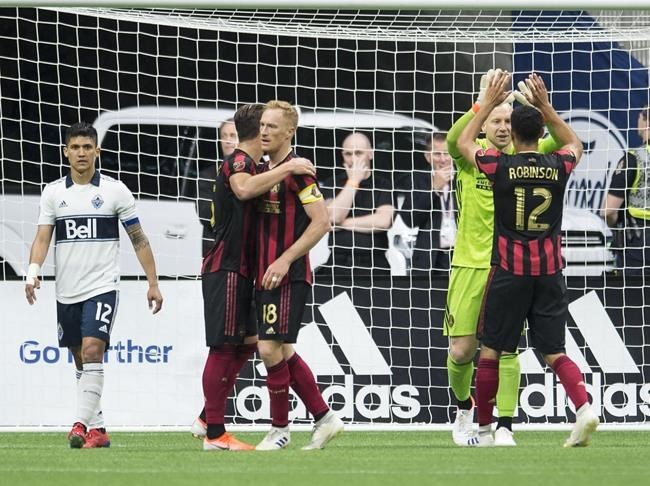 Penalty kicks have plagued the Whitecaps all season. Eleven games into the year, they've conceded seven. Last year they gave up a league-leading nine.

The coach, who's in his first year as bench boss with a Major League Soccer club, said he's never experienced a team that gives up so many similar opportunities.

"It's incredible. It's way too many," Dos Santos said. "It's concerning me. We have to address it."

Wednesday's penalty kick came midway through the first half after Vancouver winger Lass Bangoura ran into Atlanta's Gonzalo Martinez. Officials reviewed the play and determined it was a foul in the penalty area.

Josef Martinez stepped up to take the kick, sailing a ball past Crepeau on the right side for the only goal of the game.

The 25-year-old Venezuelan striker has five goals this season. He led the league with 31 goals in 34 games last year.

Atlanta has now won five games in a row, shutting out its opponents in each contest.

Breaking through the United back end was a struggle for the 'Caps on Wednesday. Vancouver had possession through just over 54 per cent of the game, but rarely broke through to get in scoring position.

"They were very well organized and we found it difficult (to break through)," said Whitecaps midfielder Andy Rose.

"I think there were times when we were impatient. But the more opportunities we got to possess the ball in the final third and put quality delivery in the box would have helped. But for sure they were very compact and organized at the back."

Vancouver went the entire first half without a shot on target.

"We asked the guys to be much more pragmatic in the last third because if you're there against Atlanta and you're always looking for the perfect play, it's not going to help you," he said. "And there were moments where we had to be a little more aggressive."

Atlanta won the MLS Cup last season and, despite a slow start to the year, the team remains a force to reckoned with, Rose said.

"Against these teams, you just have to put the ball in the back of the net," he said.

"We came into this evening in a very good run of form. And it just goes to show that when you play a top team you have to finish your chances."

United 'keeper Brad Guzan had two saves on Wednesday and collected his sixth clean sheet of the season.

Maxime Crepeau stopped five shots for the Whitecaps. He also brought the home crowd of 16,138 to their feet midway through the second with a sequence where he made a trio of saves in quick succession.

"I just remember that I focused on one ball on at a time, that's it," Crepeau said. I'm happy that I kept the team in the game and gave them a chance to actually tie or win. But it's disappointing to not get any points right now."

The saves gave Vancouver a bit of an extra boost, Dos Santos said. But he wasn't surprised by the performance.

"Max is a 'keeper that's kept us in games and an important player with this team. And that's why he's with the Vancouver Whitecaps."

The 'Caps will head to Kansas on Thursday where they'll play Sporting Kansas City on Saturday.

United are off to New York where they'll face the Red Bulls on Sunday.

NOTES: Atlanta's Franco Escobar was shown the yellow card for dissent. Vancouver's Ali Adnan and Ardaiz, and United's Remedi each received a caution for unsporting behaviour. ... Fredy Montero donned the armband for Vancouver. Jon Erice, who usually acts as captain, sat out after suffering an ankle injury in training on Monday. ... Wednesday marked a return to B.C. Place for Atlanta's Brek Shea. The defender spent two seasons in Vancouver before signing with United FC as a free agent last December.

Ex-Dodgers star Carl Crawford arrested on assault charge
Jun 5, 2020 12:31 AM
Comments
We welcome your feedback and encourage you to share your thoughts. We ask that you be respectful of others and their points of view, refrain from personal attacks and stay on topic. To learn about our commenting policies and how we moderate, please read our Community Guidelines.