VICTORIA — British Columbia's use of solitary confinement among youth inmates is "disturbing" and the province needs to change its practices to follow international standards, the province's ombudsperson says.
Jun 15, 2021 6:41 PM By: Canadian Press 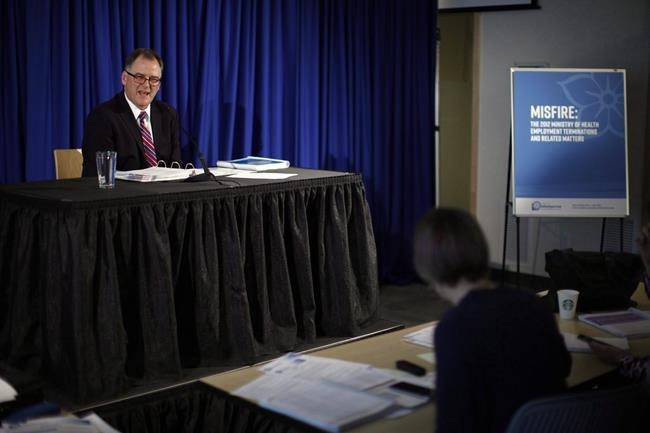 VICTORIA — British Columbia's use of solitary confinement among youth inmates is "disturbing" and the province needs to change its practices to follow international standards, the province's ombudsperson says.

A three-year investigation by Jay Chalke concludes the provincial government's use of solitary confinement for jailed youth is "unjust and unsafe."

"It's inconsistent with the youth justice legislation, it's inconsistent with international norms and conventions, and with recent Canadian court decisions which found the analogous practice with adults in corrections to be unconstitutional," he said Tuesday about B.C.'s current implementation of the confinement for those aged 12 to 17.

B.C.'s laws should be changed to match international standards, boosting oversight abilities, limiting how often a youth can be put in confinement and setting a maximum of 22 hours for solitary, he said.

B.C. has two youth custody centres in Prince George and Burnaby, and the study found the average duration of confinement rose over a three-year period.  In once case, a youth spent 78 out of 81 days in solitary.

"This report reminds us all that we always have to ask what is going on in closed institutions," Chalke said during a news conference.

In response to the report, Children and Family Development Minister Mitzi Dean said B.C. is developing a framework to improve and modernize its youth justice system.

She said the ministry accepts the "spirit and intent of the recommendations" and will incorporate them into its youth justice framework.

"Both the child welfare system and the justice system are overly involved in the lives of Indigenous people, children and families. It is part of the damaging colonial legacy that continues to this day – and as part of our commitment to reconciliation, we need to address it head on," she said in a statement.

Because B.C.'s youth custody rate is the among the lowest in Canada, Dean said, there are instances where youths, especially girls, are in custody by themselves.

"Although we do not consider this separate confinement, the ombudsperson included these circumstances in their data," she said.

Despite a drop in the number of youths being placed into the province's two detention centres from 2017 to 2019, the report notes the duration of isolation rose and Indigenous youths accounted for more than half of the solitary confinement incidents.

Of the 33 instances of solitary confinement situations that lasted longer than 72 hours, all but one occurred in the Burnaby centre.

"These practices of isolation can create a self-reinforcing cycle in which the harmful effects of isolation make it harder for a person to be in a non-isolated environment, and so isolation is more likely to continue," the report says.

Indigenous girls appear to be particularly subject to the confinement practice, accounting for more than half the hours of solitary confinement among First Nations youths, Chalke said.

Chalke called for an understanding of what Indigenous youths face.

"We have to take seriously the ongoing legacy of residential schools and systemic racism that exists in so many of our public institutions," he said.

The report also calls for an end to isolating those under the age of 16.

Chalke said he's encouraged that the ministry has accepted the recommendations but the lack of urgency by government is worrying.

"I am concerned that the ministry has set out timelines for some of the recommendations that are longer than we believe are doable and appropriate," he said.

— By Nick Wells in Vancouver.

This report by The Canadian Press was first published June 15, 2021.