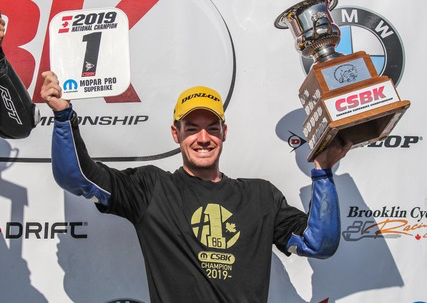 NEWS RELEASE
BEN YOUNG RACING
**************************
BOWMANVILLE - After years of hard work, determination and grit, Ben Young, of Thornbury, ON, has won the National Canadian Superbike championship. Despite a hard day with a big crash in Superpole, Young secured the championship with a solid third-place finish in the first of two races at Canadian Tire Motorsports Park, Bowmanville.

During the first part of qualifying on Friday, Young had topped the time sheets aboard his BMW S1000RR. Unfortunately, inconsistent weather resulted in the Top 10 Superpole session being pushed to Saturday morning. During the Superpole, riders were given the option to use a special super soft qualifying Dunlop tire, which Young took advantage of.

He took Pole Position with a 1:21:598 – fairly impressive given the cloudy and windy weather, but then disaster struck.

Coming under the bridge just before turn two, Young lost grip in the front before he’d even started braking for the corner. This sent both him and the bike straight into the hay bails at the entry of turn two, and quickly officials red flagged the race. Fans looked on with baited breath as Ben took a few minutes before he finally stirred, and sat up.

Battered and bruised, he went to medical, while the team assessed bike damage and made a plan to get it ready enough for dyno. With a 15-minute deadline to repair the extensive damage, Willie Vass, Scott Young and Scott Cartier pulled off the impossible, and with 11 seconds to go, got the bike to dyno to secure the Pole Position, and the additional championship points.

With the championship in mind, the team decided to use a harder compound tire for the race. This would give Young longevity, however he would sacrifice in the first half of the race. It proved to be a smart decision and they reaped the rewards. It was a close race, with under two second between the top 10 riders at one point – something typically unheard of during Superbike races.

Young fell back to fifth after the start, again playing the long game. His patience paid off, as he watched those in front, learning their weak spots and waiting for the tire to truly get to its full potential. He flitted up and down a few places, and by the penultimate lap, fought his way into his final position of third place. This finish was enough to secure Young his first national championship.

“I can hardly put into words how stoked I am. We’ve had such a strong season with the BMW and the team working so well, but the crash was definitely a downer this morning. I was so pleased to put it on the podium and win the championship, not just for me but for the team and all the fans. Really looking forward to the final race of the season tomorrow [Sunday], as there is no pressure.”

Ben Young would like to thank the best team in the paddock – Willie Vass, Scott Cartier, Scott Young and Steve Weir, who had to fly to California for MotoAmerica, but was with us all the way! Huge thanks to mum, and all the family, friends and sponsors for their continued support through every up and down.

The 26-year-old pilot of the #86 BMW S1000RR is also a proud Laps for Muscular Dystrophy (Laps4MD) rider who’s pledged to donate $1 for every lap he lead this season. These donations go to Muscular Dystrophy Canada to help make a difference in the lives of over 50,000 Canadians affected by a neuromuscular disorder.