Yanionyen site in Barrie explains how Huron-Wendat formed alliances, lived off the land

'More people need to know about this before we throw a subdivision onto another piece of land,' said Rob Jamieson
May 2, 2021 7:00 PM By: Ian McInroy 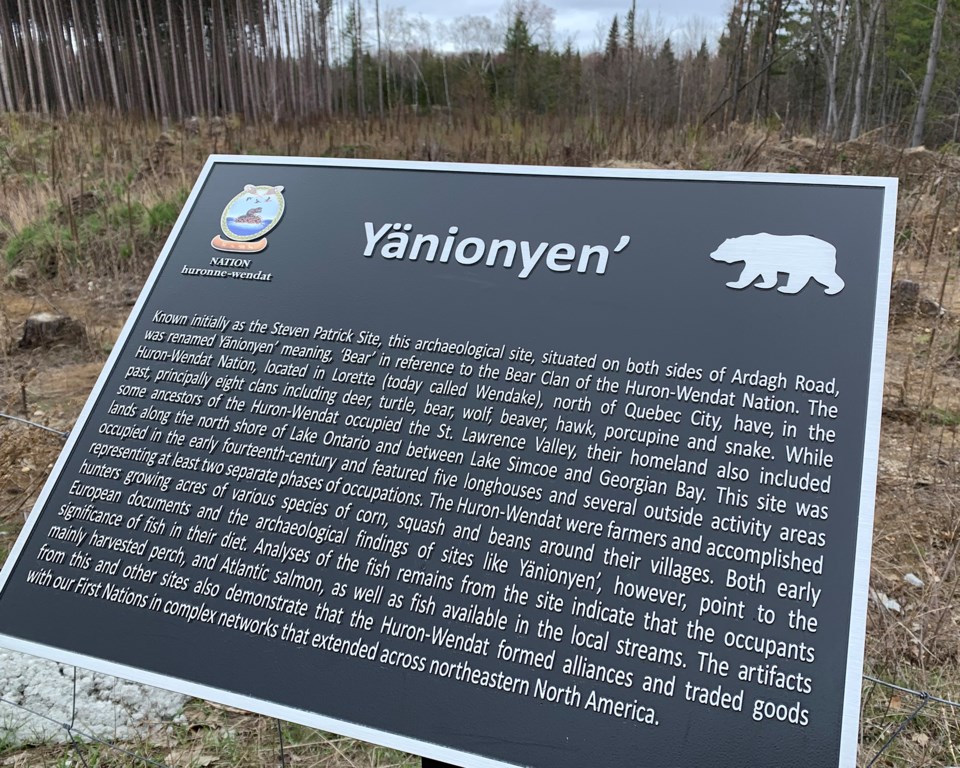 This plaque on Ardagh Road, east of Mapleton Avenue, identifies the significance of the lands to the north of the street that were once home to members of the Huron Wendat Nation hundreds of years ago. Ian McInroy for BarrieToday

A nod to the city's Indigenous past may not be visible at first to drivers on a busy street in southwest Barrie.

But that past, along with other sites across the city and Simcoe County, shouldn’t be forgotten for future generations.

A plaque on Ardagh Road, east of Mapleton Avenue, spells out the significance of the Indigenous people who lived on land — now brush and former county forest land — that will one day be another subdivision.

"Known initially as the Steven Patrick Site, this archeological site, situated on both sides of Ardagh Road, was renamed Yanionyen meaning ‘Bear’ in reference to the Bear Clan of the Huron-Wendat Nation," the plaque states. "The Huron-Wendat formed alliances and traded goods with our First Nations in complex networks that extended across northeastern North America."

The area was occupied in the early 14th century and featured at least five longhouses, which were occupied during at least two separate phases. While the Huron-Wendat were farmers, growing acres of corn, squash and beans, European documents and archeological findings suggest fish was also a huge part of their diet.

There was certainly not a shortage of local fishing holes to choose from, including Lake Simcoe and Lake Huron (Georgian Bay, about 30 kilometres to the west). To the east is Bear Creek, a tributary of the Nottawasaga River, which flows through the Minesing Wetlands before draining into Georgian Bay.

Anglers in the 21st century would be in their glory.

The warm-weather fishery in inland waters and bays saw pike, white sucker, bullheads, centrachids (sunfish and bass) and non-spawning or immature perch. They were caught with traps and/or weirs.

And as winter approached, the fall fishing in the lakes saw fall-spawning salmon, lake trout, lake herring and lake whitefish.

Coun. Natalie Harris, who represents this part of the city, was part of the process to have the plaque erected.

“It's important for Barrie residents to know the history of the Huron-Wendat as their lives involved lands used in Barrie until about 350 years ago,” she said. “The artifacts found in locations such as the longhouse site on Essa Road and at the Allandale Station tell us the stories of their trading during colonization and results of epidemics which killed many of the Huron-Wendat people.

“It is so important to respect these sites and to determine the affiliation of any remains recovered, in accordance with provincial regulations, and the City of Barrie has been doing just that in conjunction with First Nations partners," she added.

City residents might consider learning more about Barrie’s rich Indigenous past, said Rob Jamieson, who also worked with Harris on the project.

“Probably a lot of people who live within the city of Barrie have no idea of this rich history that exists within the city,” he said. “More people need to know about this (Indigenous past) before we throw a subdivision onto another piece of land.

“What a shame that this could not have been preserved as an area to be recognized,” Jamieson said. “An educational centre would’ve been a great tourist opportunity. Not only for truth and reconciliation, and not only to share knowledge with non-Indigenous and Indigenous people, but also to show respect.

“Let’s do something that pays tribute and homage to Indigenous people and where also we can learn about a greater consciousness, respect and awareness,” he said. “That’s what truth and reconciliation is all about.”

About the Author: Ian McInroy