The artists on the streets branching off Collingwood's main street want help letting visitors know where to find the town's creatives
0
Jun 5, 2019 5:30 PM By: Erika Engel 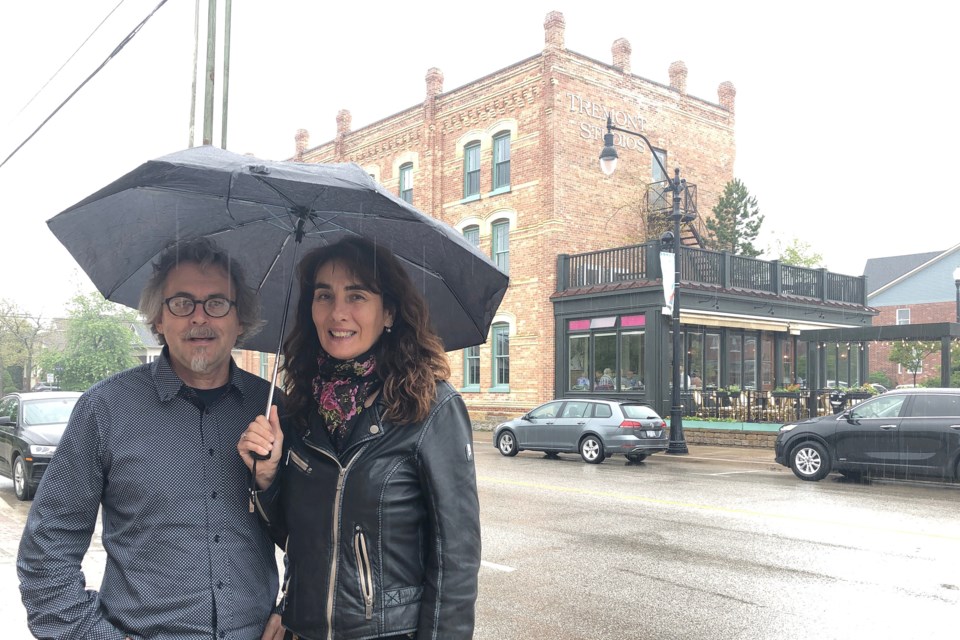 No fewer than 18 artists are working in studio space on Simcoe Street.

Around them, a theatre, an arts foundation, an art store, galleries, and a dance studio bring together more artists. Nearby is the library, the musuem, a cafe, and an outdoor market space.

The area has unofficially been referred to as an arts hub, and it all started with the restoration of an old building.

In fact, the street is home to several historic buildings, restored by Anke and Rick Lex, a creator and a heritage protector.

Anke said people are always amazed at the environment created by placing an art studio in a heritage building. She said it’s inspiring even for those who are not artists.

Their marriage of art and heritage birthed a vision for Simcoe Street, and one they hope to put a label on.

Rick and Anke were at a Collingwood council committee meeting on Monday night to ask the town to establish a Creative District, with Simcoe Street at the heart of it.

“It started with directional signage,” said Rick. “The artists asked if they could have a sign on the main street pointing people this way.”

The Creative District title, said Anke, is for marketing and signage purposes only. It wouldn’t exclude “non-creative” businesses from the area.

“We owe it to our visitors to help them discover all these great things,” said Anke.

“It will help make this artist community more sustainable, too,” said Rick.

Rick and Anke purchased a run-down building on the street more than ten years ago. They restored it into Tremont Studios, which is home to a restaurant/cafe and artist studios.

By opening day, Anke said she knew they could do more in the neighbourhood for artists.

“I was surprised at the demand for space for the creative sector,” she said, adding they get calls every day from artists looking for studio space.

There’s currently a waiting list for space on Simcoe Street.

Two of Simcoe Street’s newest artists, Alison Boyack and Tjalling Halbertsma, now share the loft space at 65 Simcoe above a gallery curated by the Blue Mountain Foundation for the Arts. The gallery serves double duty as the entrance foyer to Simcoe Street Theatre.

Boyack is an oil painter who, until November, worked from home.

“It’s a great space, it’s so big and having the gallery below is so nice,” said Boyack. “This corner … there’s so much going on.”

She said she comes to the space to paint five days a week and has quickly amassed several finished works since moving into her own studio space.

“It’s nice to be somewhere you feel there’s a high level of talent,” she said, adding it also helps to have a cafe downstairs and an art supply store next door.

“Creative District is a great name,” she said. “This is definitely a little district.”

Beside her, Halbertsma works in his photography studio, where he specializes in portrait photography.

He’s recently made a career change and earned his photography degree in 2017.

He waited for a year before he found a studio space of his own in Collingwood.

When he first heard about the space available, he asked Anke and Rick Lex to help him find someone to share it with. They knew Boyack was also looking for space, and helped connect the two creators.

“There’s a culture here, there’s support,” said Halbertsma. “There’s a whole shift in what is valuable, what is important and what is needed.”

He gives kudos to Rick and Anke Lex for their work building the district.

“They don’t brag about it, but they do more than people realize,” said Halbertsma.

Rick and Anke are excited to see a growing community of creators inspiring and challenging each other, and they want more of Collingwood’s visitors to discover that community.

“If the town can say, we have a creative district, that says a lot about the town,” said Rick.

“It says this is a great town,” said Anke.

“It really highlights the arts in Collingwood,” said Rick.

The two hope to see wayfinding signs that include many of Collingwood’s attractions including Hurontario Street and all the side streets that branch off it, pointing to not just the Creative District but to other corners of the town. They’ve been pushing the town on the concept for the last three years.

Ideally, said Rick, the signs will go up in the next few months, officially naming Simcoe Street and area the Creative District.

Artists take a leap of faith with newly re-designed gallery space
Jun 5, 2019 11:00 AM
Comments
We welcome your feedback and encourage you to share your thoughts on this story. We ask that you be respectful of others and their points of view, refrain from personal attacks and stay on topic. To learn about our commenting policies and how we moderate, please read our Community Guidelines.