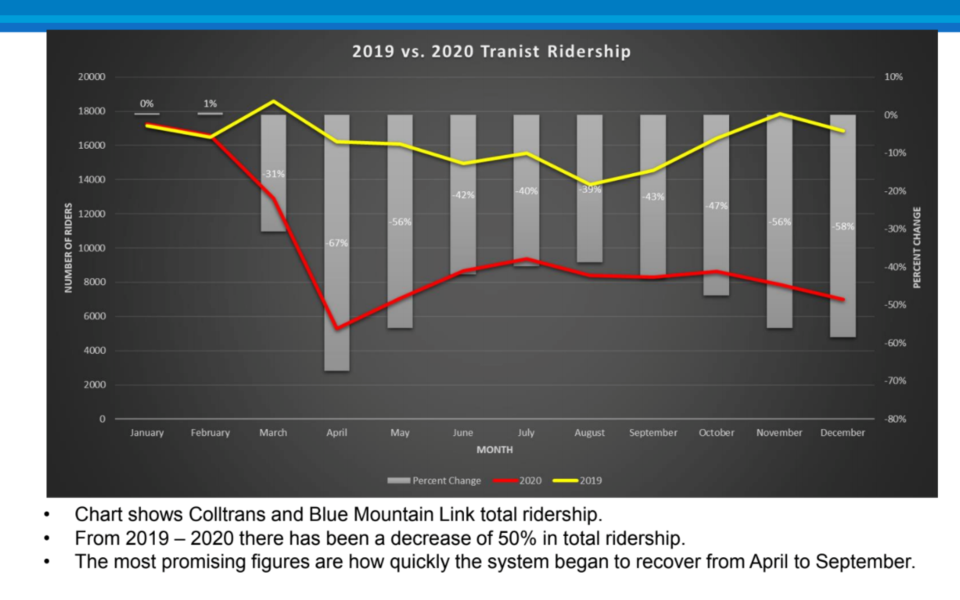 Collingwood transit has seen a 50 per cent decline in ridership in 2020 compared to 2019. Graphic provided by Town of Collingwood

A Collingwood-based transit study is underway now, and, in the meantime, town staff have extended contracts for accessible services.

During a Development and Operations Standing committee meeting last night, town staff provided a transit update to some of council.

It was announced in 2020 that Ace Cabs would no longer be providing that service. Since then, the town has renegotiated.

The town has also extended its contract with Red Cross for accessible transportation for medical appointments through March 31, 2021, and is working on an extension with Landmark for its accessible bus service to July 2022.

With interim services extended, town staff will be releasing a request for information soon, to explore the market of accessible transportation services.

“The intent of this is to assess what opportunities are out there for providers of accessible services, and if we have good interest, we intend to issue a request for proposal for an 18-month contract,” said Slama.

There is also a town-wide transit study underway with a consultant to look at the existing system and propose changes to public transportation in Collingwood. The study involves conversations with surrounding municipalities and will include public input via Engage Collingwood (which should be posted this week) and a virtual public information session scheduled for later this month.

The consultant will host another virtual public session in March to go over any proposed changes. The final report will be delivered in the late spring.

Additionally, Slama said the town caught wind of a grant program from the province and has applied for $30,000 to spend on an investigation into accessible transportation options.

The town partnered with Wasaga Beach and The Blue Mountains on the grant application and, if successful, the study would look into providing some service in those communities as well.

The Town of Collingwood is expecting delivery of two new diesel buses by March 2021. The delivery has been delayed because of COVID-19, according to Slama.

The buses are being paid for through a government grant the town received in 2020.

Slama said the town will use the new buses to replace to in its existing fleet, but they’ll be keeping the old buses. One will be used as a back-up bus, and the other will be used for spare parts.

“It’s more valuable to us that way than selling at this time,” said Slama.

Ridership down 50 per cent

Slama told the committee the town saw an 50 per cent decrease in public transit ridership in 2020 compared to 2019.

Ridership dropped by 67 per cent in April, but started to climb back up. In August 2019, Collingwood transit was at about 39 per cent less ridership than in August 2019. From there it hovered between a 43 per cent and a 58 per cent decrease per month.

“We slowly saw some recovery, but we’re about 50 per cent lower on average year-over-year,” said Slama.