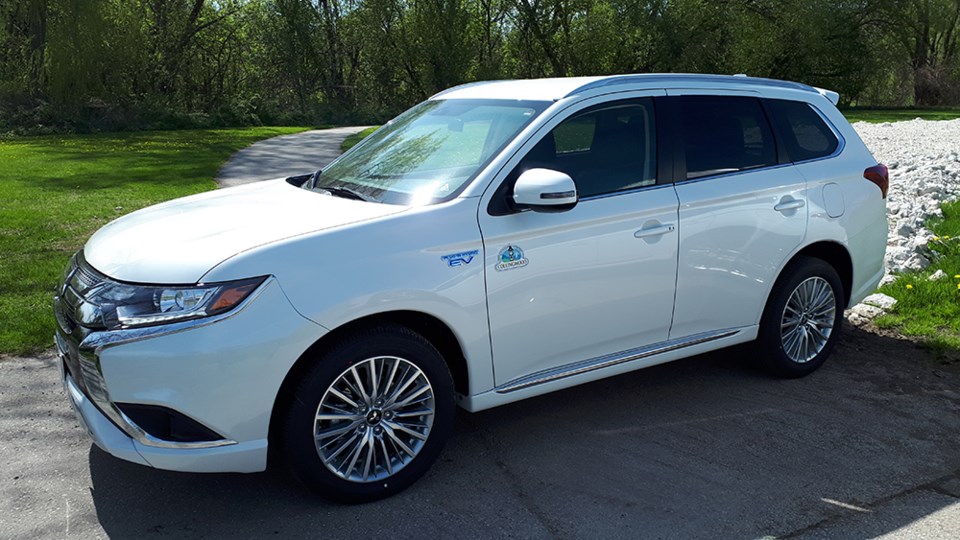 One of the four new electric hybrid vehicles purchased by the town for use by various departments. Contributed image.

The town announced yesterday in a press release it had purchased four new hybrid electric vehicles to be used for “light duties” for the public works, water, bylaw, and building departments.

The vehicles are Mitsubishi Outlander PHEVs and were purchased for $39,748 each.

The two new Zamboni-brand ice resurfacers will be put to use at Eddie Bush Memorial Arena and Central Park Arena. The town will use one of its old ice resurfacers for the outdoor rink in the winter.

According to Dean Collver, director of parks, recreation, and culture, the town auctioned off the two other ice resurfacers via the GovDeals website.

The vehicles are plug-in hybrids, meaning they can charge overnight at town facilities.

The Outlanders have a range of 40 km on one charge. When required, the gasoline engine will charge the battery and run the vehicle.

According to the town press release, it’s anticipated the vehicles will operate on the electrical motor for most of their service life as daily mileage isn’t likely to exceed the 40 km range.

The town has also purchased two bicycles for use by bylaw enforcement officers.

“We’re doing this to help our corporation become an example of good environmental stewardship,” said Collver.

Mayor Brian Saunderson issued a challenge to other corporations in the community to work toward more eco-friendly policies.

“As the Town of Collingwood moves forward with green corporate initiatives, I encourage the businesses of the region to also look for ways to implement new green practices, and reduce energy consumption and waste,” said Saunderson in the press release. “We all have a role to play in the environmental stewardship of our beautiful community.”

While the town’s vehicles can charge in a regular 120-volt outlet, there are plans to install vehicle charging stations in Collingwood this year. So far a location has not been decided.

BEYOND LOCAL: Is your child ‘self-bullying’? What parents should know about the harmful practice
Feb 28, 2020 8:55 PM
Comments
We welcome your feedback and encourage you to share your thoughts on this story. We ask that you be respectful of others and their points of view, refrain from personal attacks and stay on topic. To learn about our commenting policies and how we moderate, please read our Community Guidelines.