Staff used the non-standard purchasing method for items or services 30 times last year, according to the annual report provided by the town's procurement department
Feb 26, 2021 12:24 PM By: Erika Engel 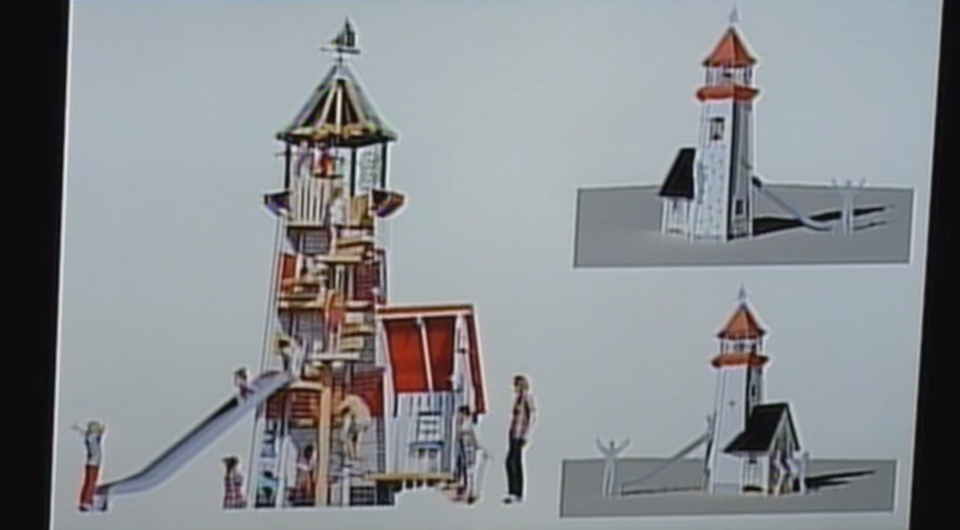 An artist rendering of the lighthouse playground piece being constructed for the new Sunset Point Park Playground.

The Town of Collingwood has reported 30 non-standard purchases and four emergency purchases from 2020 that did not use a competitive, multi-bid process and exceeded $2,500.

The purchases ranged from roof repair to a fire rescue boat to a lawnmower offered by a resident who moved away.

The town’s purchasing bylaw requires such purchases to be reported on an annual basis because they do not follow the standard procedures set out for purchasing items and services.

“As defined in the bylaw, there are legitimate reasons to proceed with a non-competitive purchase, and these are used judiciously,” states a staff report prepared for a strategic initiatives committee meeting that will take place March 1. “The exercise of conducting an annual public report is to clearly explain the reasoning behind purchases for good government purposes.”

Non-standard procurements include purchases made without or with a limited competitive process, meaning the town does not seek bids from multiple sources in an open competition.

The report also includes emergency purchases, which can only be made for public health and safety, maintenance of essential town services, welfare of persons or public property, or the security of the town’s interests.

The largest price tag included in the 30 non-standard purchases last year was $1.13 million for the supply, delivery, and installation of a water membrane for the town’s water treatment filtration system. The product, called ZeeWeed, is exclusively supplied by Suez, so the town purchased direct from the supplier.

The Collingwood Fire Department purchased a rescue boat from Connor Industries for $100,000. The reporting on this purchase indicates there are only two manufacturers in Ontario that could have provided the boat and the fire department approached both for the purchase.

The town paid $10,300 to National Coatings to deal with a “persistent leak” at the building at 43 Stewart Road that staff say challenged several contractors hired to repair the roof. Research produced information into an alternative repair material only available through National Coatings.

The town paid $36,000 to Bell for cellular mobile service. According to the staff report, both Bell and Rogers offered identical rate plans and the town worked out an agreement with Bell to expire at the same time as the province’s program so the town could join the next round of the cell service program through Supply Chain Ontario.

Also among the non-standard purchases was a John Deere mower for $40,680 and a golf cart for $4,000. Both were purchased from a local resident who was moving and offered the almost-new items for what staff called an “excellent price.”

There were two purchases that met two of the above criteria.

The largest emergency purchase was $170,000 to Seely and Arnil for emergency repairs to the South Shore Park shoreline.

You can see the staff report along with a full list of non-standard and emergency purchases here.

The report will be before council at the strategic initiatives committee meeting on March 1.