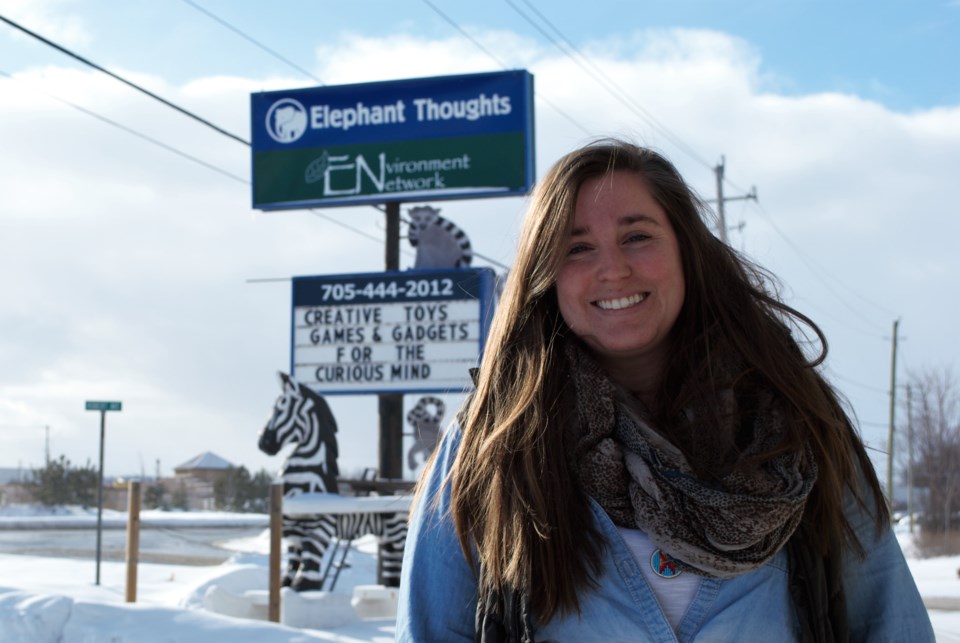 A pull toward travel has led to a homegrown woman to make a major difference in Indigenous communities across Canada.

For this week’s edition of People of Collingwood we sat down with Marni Sandell, program manager with Elephant Thoughts educational outreach.

As I grew up I did what most teenagers do; I decided I wanted to get as far away as possible from my hometown. (laughs)

So, I chose to do my undergrad at Dalhousie University in Halifax. I did a lot of travelling.

I realized as I was travelling and experiencing all these new places that I was so lucky to come from Collingwood. I find it to be a unique spot. I has a little bit of everything.

I didn’t realize it was so unique when I left. It’s a really special place.

I was lucky enough to fall into a job and a career that ended up bringing me back here.

Q: How long have you worked for Elephant Thoughts?

A: Since 2012. I started with Elephant Thoughts as an instructor.

They had just launched a new program. A lot of what Elephant Thoughts (does) is outreach work in Indigenous communities.

They were sending teachers and instructors into... the Cree territory in northern Quebec. They were offering a tutoring program trying to increase graduation rates.

At this point, I had no idea what I wanted to do (with my life), but they were looking for instructors who would want to participate in this program. I had a science and math background, so it was sort of like a natural fit.

Being someone who was really into trying new adventures... I said, absolutely.

I went up north for this six-week program and worked with amazing high school students in Mistissini.

After the six weeks, a lot of them ended up graduating high school. This was in an area where, historically, the graduation rate had been quite low... as low as one per cent. It was this remarkable moment where, I had worked so hard with these kids, and I cared more about their exams than I’ve ever cared about my own.

At their graduation ceremony, I thought, I couldn’t imagine working anywhere else.

A: I continued working as an instructor, where I would travel to different Indigenous communities across Canada and deliver outreach programs.

After a few years, I took on a new role as program manager. Now I split my time between training and supporting teachers to go out and deliver these programs and also delivering them myself.

Based on the experiences I had delivering the program, I have been able to grow and evolve the programs, and push them to be more successful by helping more kids graduate, or engage more community members in what we’re doing.

When I first started, I was on the road all the time. I basically lived out of three or four different suitcases.

My role now is more communicating with different communities and helping them plan the programs they want to have in their communities.

The reason that I loved Elephant Thoughts so much is that I got to travel. Whenever I want to hit the road, I can still do that.

Q: Can you give an overview of Elephant Thoughts as an organization in general?

A: We always use this analogy around here that we’re sort of the little engine that could. (laughs)

There’s not many of us in the organization that are here permanently and full time... but our reach is really wide. We don’t often turn down projects. We like really challenging programs.

Elephant Thoughts is sort of split up into three sections.

We also operate a store in Collingwood and run local summer, March break and P.D. camp programs. That helps to cover the overhead that exists in our organization.

We also do charitable work overseas. Since Elephant Thoughts’ inception in 2002, we’ve done work in India, Tanzania and Nepal. The type of work we do there varies.

Mine is more about creating awareness about Indigenous issues.

Q: Elephant Thoughts has done work with other organizations in the area, for example, the Collingwood Youth Centre. Can you tell me a bit about that?

A: What we’ve done over the past couple of years is come together with other organizations in the area to create like a hub. We co-write grants together.

Last year we started, what we called our Three-Charities Camp.

Elephant Thoughts, the Environment Network and the Georgian Triangle Humane Society all came together to design a summer camp for kids.

They get the science side that we run, they get the outdoor component and environment that Environment Network offers and they also get to learn about animal welfare and animal care through visits to the humane society. That partnership also goes into running the youth centre.

Q: What are your favourite parts of your job?

I love training and supporting new instructors. I love seeing their growth over time and how they develop as educators.

I love getting to travel and work in lots of different communities and engage with lot of different kids of different ages. Although I’m going there to teach programs, I always find I come away from it learning so much as well.

In partnership with a lot of the Indigenous communities we work in, we’ve just created an online tool called the Indigenous Journey. It’s a way for teachers in non-Indigenous schools to teach about these topics. I’ve been able to pilot that in a lot of schools. It’s been really fun. It’s a tough subject to talk about in schools but I’m really excited to see it being brought into schools.

Q: Do you have any specific examples of things you’ve learned while teaching that maybe surprised you?

A: Working in certain communities has really changed the way I see the world.

Working with people who have a different world view than your own challenges your inner biases and ways of thinking.

When I first started this job, I saw myself as being very open minded. But when I started, I didn’t really have a strong understanding of the history. When I went to school, a lot of our history textbooks didn’t cover the colonialist history of Canada.

For me, it was this realization that I had a lot of unlearning to do. I put in a lot of work to change. I won’t be able to ever completely change the way my brain is programmed, but I’m really challenging myself to unlearn things in my head that I didn’t realize were there, like inherent biases or stereotypes.

I find I need to really constantly be reflecting on why I’m thinking a certain way.

I was once at a conference about Indigenous education and we were talking about teaching science.

We learn in science that there’s living things, and there’s non-living things. Plants, animals and humans are living. Rocks, fire, water... those things are not living.

In some communities, there’s a belief that what we consider to be non-living things are still alive and half souls and spirits.

For me, it was this cool moment where I thought, ‘Of course water is alive!’

It flows, grows, changes and has energy. It was cool to see something that I thought was concrete, but seeing it from a different point of view. How is fire not alive?

It shakes up your views. It’s allowed me to be more open about other people’s views.

LETTER: Animal shelter director thanks volunteers for leaving no pets behind
Apr 20, 2021 7:50 PM