Ron Martin, the project manager for the construction project, said there were risk-management measures available but not used for the arena and pool projects
Sep 17, 2019 3:19 PM By: Erika Engel 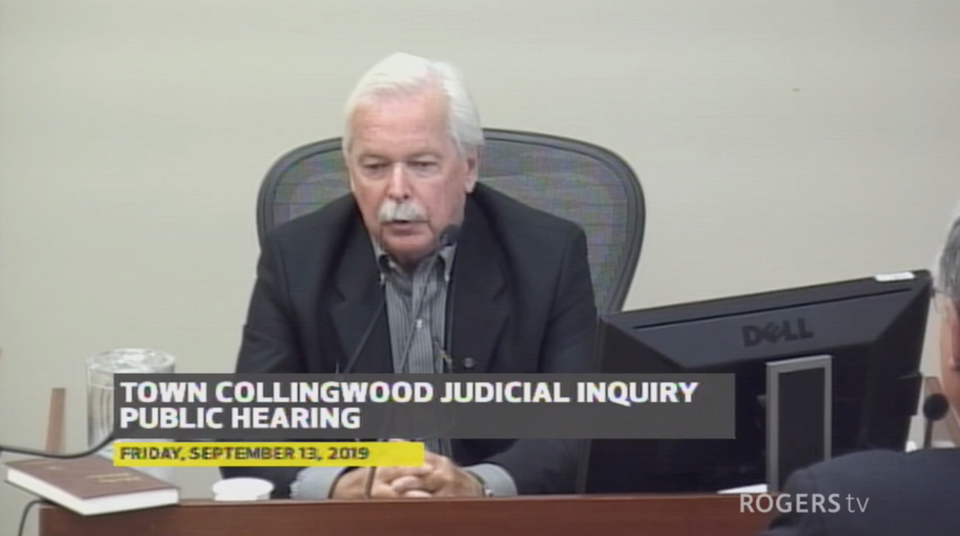 Ron Martin, the former deputy chief building official for the Town of Collingwood, and, eventually, the project manager for the arena and pool projects in 2013. Contributed photo

On the witness stand at the Collingwood Judicial Inquiry, the former town staffer responsible for overseeing construction of a new pool and arena detailed his surprise at an unusual payment schedule and being excluded from early planning stages of the project.

On Friday (Sept. 13) the inquiry probed the details of a contract between the town and BLT Construction for the building of two recreation facilities in Collingwood in 2013.

The current phase of the inquiry is focused on the allocation of the 2012 Collus Share sale proceeds to pay for fabric membrane recreation facilities at Central Park Arena and Centennial Aquatic Centre.

Ron Martin, the deputy chief building official for Collingwood until his retirement in 2015, said he wasn’t included in the arena and pool projects until September 2012 - after the contractor was hired and the contract signed.

“On the normal project management, I would have been involved way before this, in the early stages of even the budgeting,” said Martin of the recreation facilities project.

Martin said there could be two reasons he was involved late in the project.

Martin explained a “design-build” project meant the town was saying to a company it would like to build “this” and the company becomes a “project manager … they take it from A to Z.” Martin said the process, essentially, was a “turn-key” project.”

Once Martin was put on the project, however, he expressed concerns and proposed changes to the payment schedule.

“What I was used to in a conventional contract is the contractor submits a monthly bill … for the work completed to date,” said Martin. “We, in conjunction with the consultants say, ‘Yes, you actually finished 50 per cent of the painting, you’ll get 50 per cent of your money.’”

He said it was also common to hold back 10 per cent of the contract price “to protect yourself against outstanding liens at the completion of the project.”

The total project cost listed in the contract (before taxes) is $10.9 million, a price tag that went up after changes to the pool building were included.

He was surprised the town would have paid 50 per cent of the contract price - more than $5 million - when the only work completed would be 'ground prep'. He also said the term ground prep was vague and could be “interpreted a lot of ways.”

“Worst case scenario, somehow a large amount of money has been paid and should something happen and the contractor just say ‘bye,’ what position would the town be in? I felt we should be better protected, let’s put it that way.”

Martin proposed a new payment schedule that would divide the remaining 50 per cent of the cost into five payments “to reflect closer to actual work being constructed on the site.”

Despite the contract already being signed and a payment schedule included in the contract, BLT agreed to the change.

In an email about the payment schedule change, Paul Waddell, a BLT staffer, said the current contract payment schedule was “slightly outside the boundaries of common sense and common practice.”

Based on inquiry documents, the payment schedule - as it read in the contract signed by the town - was sent to BLT from Abby Stec of GreenLeaf consulting (owned by Paul Bonwick, the former mayor’s brother).

In an email to BLT, Stec included the payment schedule, saying it came from Ed Houghton, the town’s acting CAO at the time of the project construction.

In later cross-examination, Fred Chenoweth, counsel representing Houghton, suggested the early payments for 50 per cent of the contract cost were related to the custom-nature of a Sprung building.

“If [the contractor] is going to pay a lot of dough for a one-use product that’s to be used over a pool in Collingwood, Ontario and nowhere else, he’s going to be a little more anxious to get the money he spends for that custom piece back,” said Chenoweth.

Martin responded likening the early payment to being told a dealership wants all the money for a car before he gets it.

“I can see how that discussion or whatever you’re getting at could happen. I wouldn’t agree with it,” said Martin. “All I was really concerned with … was that the town was protected should something happen and we find out Sprung doesn’t exist tomorrow and they have an awful lot of taxpayers’ money.”

Earlier in his testimony, Martin said there was no risk for the contractor.

“The town paid their bills,” he said.

In addition to a different type of payment schedule, Martin said he was accustomed to requiring two bonds included in a project tender as security for the town.

“One being a bid bond that basically the contractor will honour that price they’ve submitted so they don’t just change their mind and walk away,” said Martin. “The second bond that’s usually put in place is the performance bond prior to or in conjunction with signing the contract …. Which is just insurance … if something should happen halfway through a project to the contractor, like receivership or bankruptcy.”

The performance bond ensures an insurance company will complete the project for the original contract price.

In addition to his testimony on the financial side of the recreational facilities projects, Martin was asked about how the physical projects went.

He said the arena project went “quite well,” but the pool project experienced problems “almost on a weekly basis.”

The pool building was, essentially, a renovation project, since the Sprung structure was being designed to go over an existing 1967-built pool. Additionally, after the contract was signed, council opted to add a therapy pool to the building and make changes to the pool, so it would qualify as a regulation pool for competition.

“Was it ever the thought that there were so many changes that had to be made … it would be better to just start all over again and put in a proper pool?” asked Associate Chief Justice Frank Marrocco, the judge overseeing the inquiry.

Martin said he didn’t want to be a Monday-morning quarterback, and reiterated he wasn’t involved in the planning, budgeting and design discussions.

“I think it was well-intentioned, the concept was good,” said Martin. “I think had everybody been given the time to really do an in-depth analysis of what we were dealing with there, that might have been the conclusion … Had that analysis been done, perhaps the result might have been, ‘let’s just build a new pool.’”

Public hearings for the Collingwood Judicial Inquiry resume on Sept. 23 at 10 a.m. in the town hall council chambers. You can watch them live in person, on RogersTV, or online here.

Inquiry turns eye to $750K consulting fees for Bonwick's company
Sep 12, 2019 1:57 PM
Comments
We welcome your feedback and encourage you to share your thoughts. We ask that you be respectful of others and their points of view, refrain from personal attacks and stay on topic. To learn about our commenting policies and how we moderate, please read our Community Guidelines.