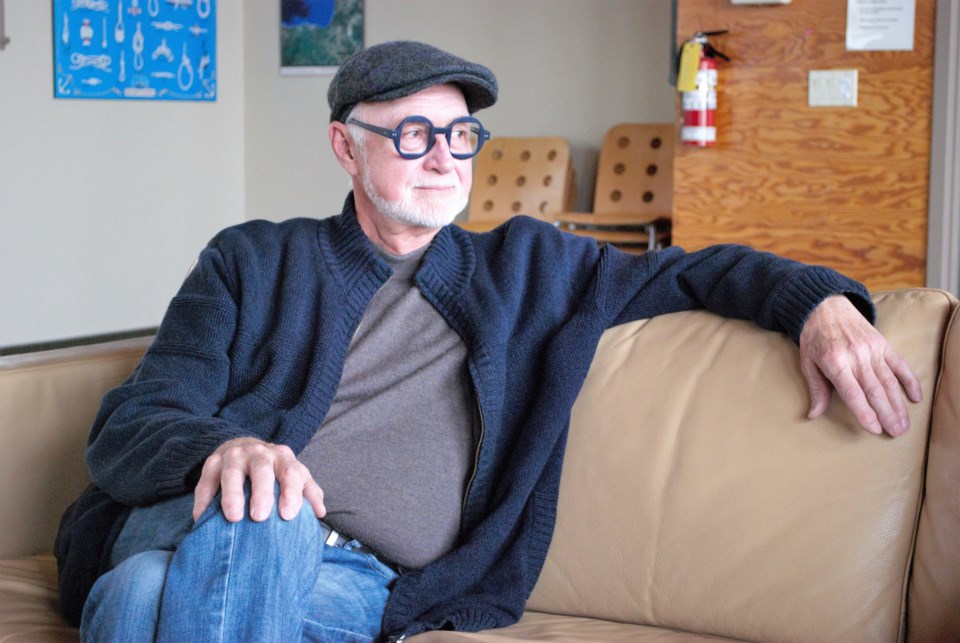 Jake McArthur is a life-cycle celebrant and author who lives in Collingwood. Jessica Owen/CollingwoodToday

He’s always been a poet, but a significant personal loss led to a life pivot toward more creative endeavours, and he has no regrets.

For this week’s edition of People of Collingwood we sat down with Jake McArthur, 73, life-cycle celebrant and author.

A: I was born in Toronto. For 25 years, I lived in Caledon. My wife and I moved to Collingwood five years ago because my son, who is an osteopath in town, moved here with his family when the babies were young.

We kept making the trip back and forth and thought, you know, we’re going to have such a short window into their lives. We decided to try something different to be close to them and have a more in-the-moment kind of relationship.

It has been such a rich five years. We’ve had the most amazing time being here.

Q: You have a business background. Can you tell me a bit about that?

A: I ran a number of different retail companies for other people; I wasn’t an entrepreneur. I ran the Canadian operation of Lenscrafters. Also Granada TV Rental.

Q: Since leaving the business world, you’ve made a transition into more creative endeavours. What made you want to make that shift?

A: Well, first, I still do some coaching with people who are in business.

I was always kind of creative, but never with art. I saw myself as a horrible artist. When I was an undergraduate in university I thought I was going to spend my life as a poet/playwright, and to put food on the table I’d probably be a professor at a university.

I left university for a year to work because I was getting married and needed a little bit of money, but I wanted to see what the rest of the world had to offer.

I got a job working at a commercial bank branch, and what I discovered was this incredible life that went on between people in the bank, customers and the surrounding environment that was accentuated by the fact that I was at Spadina and Dundas. In those days, it was a rich multicultural area.

I decided, over a period of time, that I wasn’t going to go back to school.

I spoke with some professors and as I learned about the process, I thought it was going to be too narrow or bureaucratic for me.

Although, you’d think working for a bank would be pretty bureaucratic too. And, it was. (laughs)

I got a business degree and I had this pretty amazing career that accelerated very quickly. I travelled the world.

I was very fortunate, but I was always a bit of a fish out of water. There were exciting times, but it wasn’t coming from my heart.

When my wife and I moved to the country in 1991, I started writing poetry again.

In 2000, my daughter Erica died in a car accident. That just changed the trajectory of my life. She became the subject of a lot of what I wrote.

Being in nature, I was inspired constantly.

I went back to school in California for five years and got a doctorate of ministry degree. I did a lot of writing there, like essays, papers and ultimately a dissertation. My dissertation ended up being about poetry and how it can be used with death and dying as a way to express what’s going on.

I have discovered I enjoy being on stage. By nature, I’m a very shy person. I’ve had jobs that call for me to be an extrovert, and to be very social in public, but by nature, I’m very quiet. You wouldn’t know that right now. (laughs) I never dreamt I’d be comfortable on stage. I love it.

I’ve been volunteering with hospice for 20 years. I’ve facilitated bereavement groups. My poetry has helped me cut through the enormous complexity that arises with grieving.

Q: You’re a certified life-cycle celebrant. What is that?

A: Most people think of an officiant, that’s the word they most identify with a wedding. Because of the work I did with hospice, I realized I was very comfortable with supporting people.

I didn’t know the word ‘celebrant’ at the time, but I just wanted to become a guy who could help facilitate end-of-life celebrations or funerals. I met someone who told me about this.

I took the program with the intention of doing funerals and end-of-life celebrations and I got asked almost right away by someone I’d known since he was born if I would marry he and his fiancee. I was thrilled to create a ceremony and in the time prior to the wedding I went and registered with the Ontario government to officiate.

I’ve done more weddings than I’ve done funerals or end-of-life celebrations, and much to my surprise I’ve just loved it.

The way I frame it is it’s an opportunity for me to be creative and to associate with nice people and to perform. Those are themes that have run through everything I’ve done through my life. It’s highly elegant.

I’ve been blessed to have a lot of wonderful people around me.

Q: Do you consider yourself to be a spiritual person?

I was raised in the United church. I guess it’s the most liberal of the mainstream churches. I rejected that at different times in my life, although I’m not anti-church at all.

I love the wisdom that can come from sermons, I’m just not a believer in the traditional Christian story.

My spirituality is more Earth-based and cosmos-based. I’ve always had a philosophical approach to things. When we moved to the country, we went through the cycle of seasons and we’d see the births and the deaths and the regrowings.

I just became increasingly more convinced that there was something going on way beyond just the physicality of nature. My book outlines a number of experiences I’ve had with my daughter that have indicated to me there is something more going on than what we experience here in the physical world.

I don’t pretend to understand any of that. I’m not even sure what I mean when I say it.

I think it might be something. My spirituality is totally content with just being that. I don’t seek to understand it or be able to explain it. I don’t think that’s our purpose. It’s to experience it.

Q: Since you’ve dealt with some great loss in your own life, do you ever find it difficult emotionally to perform end-of-life services for others through hospice?

A: I wouldn’t pretend that often times there isn’t an element of sadness to it.

I come from a place that most people don’t seem to come from. I feel like all my life I’ve lived with a comfort of death and dying. That doesn’t mean that there isn’t sadness and that I haven’t felt sadness, because I have, and I felt it abjectly in the case of my daughter’s death. At the same time, I have felt like she lived her life for as long as she was supposed to live her life, and she has moved on.

I would never try to convince anyone that that’s appropriate, it’s just how I see it.

I don’t believe volunteers volunteer just because they can do something nice for people. We do it because we also get something out of it. It’s a two-way street.

In experiencing the grace of their life, even as it’s coming toward its end, it’s such a huge honour to be able to do that.