Ravens fly with Olympians' grace and an 'eerie' level of intelligence

Ravens have a language (over 30 different sounds) and can communicate messages to other ravens, says outdoors columnist
Jan 24, 2021 12:30 PM By: David Hawke 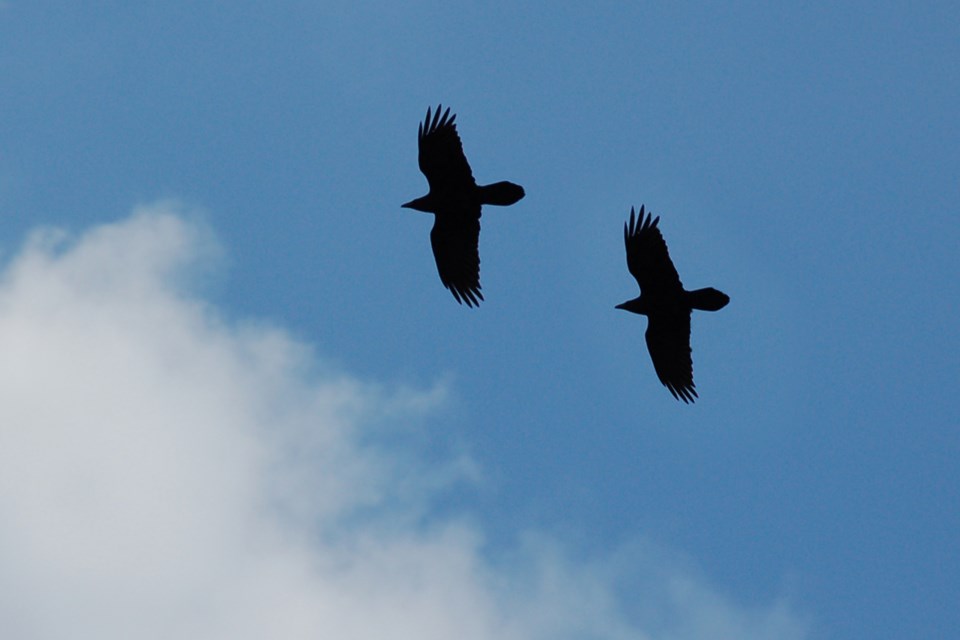 A pair of ravens exhibit the precise, symmetrical movements and grace that rivals an Olympic skating duo.David Hawke/OrilliaMatters

No doubt many of you have watched Olympic ice dancers performing their skating routine and were awed by their precise, symmetrical movements and fluid grace. I'll admit that they were pretty good, but definitely less impressive than a pair of ravens performing their courtship flight.

Unlike Olympians who rely on technology, coaching and repeated practice sessions, ravens just do it. Perfectly matched movements of flying precision. Just the two of them. No audience, judges or sponsors to please, just flight for the fun of it, partners in a sky dance.

As we move through January the local ravens have already begun to stake their territories and within weeks will be sitting on eggs. Because they mate for life, they don’t have to waste time preening and cooing and looking oh-so-fine, they just get right to the business of nest repairs and raising their young.

Until only a decade or so ago ravens were quite rare in Simcoe County and a birdwatcher had to go north to find one; now they are well established and can be observed on many occasions. If you are travelling along the Horseshoe Valley Road there is a good chance to see at least one.

A trick I have learned to help me determine if that distant black speck is a crow or a raven, is to watch how it deals with a roadway.

Crows will usually fly across a road, but ravens often fly along the road for considerable distance. Why? I don't know, but ravens tend to lock on to the flow and formation of the pavement below and follow it for a way.

Should the bird fly overhead take a look at the shape of its tail: the tail of a crow is rounded while the tail of a raven is pointed or wedge-shaped. Ravens have bigger beaks, but you do have to be quite close to see that field mark.

Ravens have been studied by a great number of people for many, many years: scientists, biologists, authors, poets, and naturalists. We've learned a few things about ravens, but one of the most noteworthy things that has been gleaned is that we don't know a lot about ravens.

They are quite intelligent and therefore defy the easily defined characteristics of other birds. Ravens have a language (over 30 different sounds) and can communicate messages to other ravens, such as where a deer carcass might be found.

They have been recorded transferring knowledge about something they've seen to other ravens, and the other ravens will go right to the spot that the first ravens told them about. Pretty wild and bit eerie.

One of my most memorable encounters with ravens happened a few years ago, as I was working in the yard. Despite being engrossed in the carpentry job at hand, I heard a raven call from high above.

So I looked up to see what was going on and stood spellbound. Flying by in perfect formation was a squadron of ravens. Sixteen of them, in pairs. Each pair flew together, and each pair was spaced from the next couple in an equal amount of air space.

But then it got a little weird (I know 'weird' isn't a scientific term, but that's what it got), as a second squadron appeared on the horizon. Again, 16 ravens in eight pairs, in formation, following the exact flight path as the ones that went overhead moments ago.

On they came, flying directly over my head, no right or left, just straight on (north by northwest, if that means anything). And then the sky was empty.

Now maybe I've read too many Narnia-type books, but what I witnessed sure looked like a gathering of the forces. The ravens had been summoned. Somewhere, council was being held. The forces of nature were gathering... we may be in for a fight. Or not. Who knows?

I couldn't find anything on the internet about this type of flight formation, so perhaps I'm ahead of the raven researchers. But this I can confirm this… there's a whole lot we don't know about ravens.

BEYOND LOCAL: Three technologies poised to change food and the planet
Mar 6, 2021 8:55 PM