On the Move, funded by Green Communities Canada, is a project to create an action plan for each of Collingwood's public elementary schools to make walking or wheeling to school easier and safer for students
0
Dec 9, 2019 3:30 PM By: Erika Engel 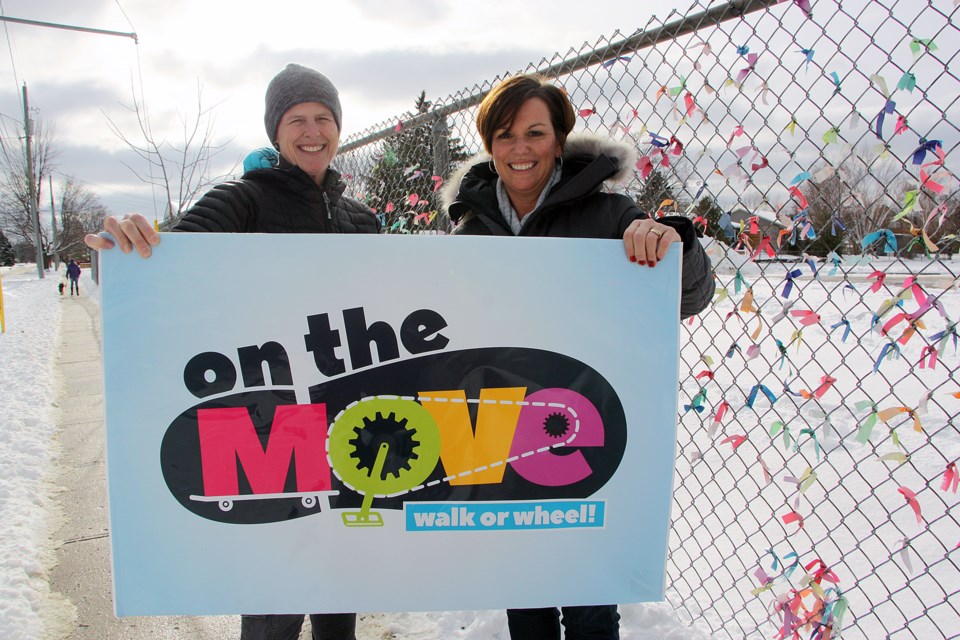 Jennifer Parker and Ruth McArthur are part of the group behind On the Move. The two were joined by Environment Network staff last week to complete walkabouts of the sidewalks and streets near elementary schools in Collingwood to look for hazards. Erika Engel/CollingwoodToday

Local adults have been walking 1.6 kilometres in kid’s shoes (figuratively speaking) to help form a plan that will make Collingwood’s sidewalks and streets safer for young backpack toting caravans.

Jennifer Parker, a staff member in the Collingwood Parks, Recreation, and Culture department, teamed up with Ruth McArthur, a public health nurse, and staff from the Environment Network for some walkabouts last week.

The team traversed the 1.6-kilometre “walkability” zone looking for any barriers or issues that could be dealt with to make the routes safer.

“We’re getting eyes on the street,” said McArthur. “We need to have and create a safe environment otherwise people will drive instead.”

McArthur and Parker are working on a project called On the Move, which is funded federally through Green Communities Canada, as an initiative to help increase active travel to and from school.

The project involves some on-the-ground work such as the walkabouts, as well as consultation with parents and schools with the end goal of producing an action plan for each school.

The plans will be written to include action items for education, encouragement, engineering, and enforcement and with the end goal to increase the number of kids using active transportation to get to school.

This particular project includes only elementary schools in the public school board.

However, according to Parker, the action plan and research being done will benefit all of Collingwood’s pedestrians.

“It reaches everybody, there are others who walk,” she said. “This will not only support the movement of kids to school, but also seniors, adults, and our youth.”

Other work so far has included counting traffic - pedestrian and car - to get a sense of how many kids use active transportation and how many arrive to school in a vehicle.

According to the Green Communities Canada literature, there’s been a decline in the number of kids walking or wheeling to school.

One of Green Communities Canada’s goals is to reverse that decline and make active transportation the new normal.

Part of the work of McArthur and Parker and the On the Move project is to find out why those numbers are declining and how to bring them back up. They’ve been meeting with parent councils, and will be sending out a survey mid-January to every elementary school child parent at all four participating schools to find out more information about school travel habits and why they do or do not walk to school.

“We want to figure out how we can make them comfortable so they feel safe taking active transportation to and from school,” said Parker.

She was part of Collingwood’s Healthy Kids Community Challenge Initiative, which, she said, got more kids walking or wheeling to school.

As a staff member with the Town of Collingwood, she’s also aware of plans like the town’s cycling plan, the traffic calming study, a school crossing study, and updates pending for the official plan, and hopes to make some aspects of those plans and studies work together with the action plan developed through On the Move. Part of the action plan development will involve consultation with town bylaw, roads staff, and OPP for engineering and enforcement items.

She’s seen firsthand the positive impacts of walking to school. She’s a volunteer for the Environment Network and runs a “walking school bus,” which is essentially an adult-led caravan of children in Junior and Senior Kindergarten and Grade 1. About 10 to 15 kids meet at a designated spot every school day and walk about four blocks together to Cameron Street Public School.

“I’ve seen so many positive changes,” she said. “It shows the importance and value of doing an initiative like this.”

McArthur has been encouraged by the excitement around the On the Move project she’s seen building. A walk to school day at Mountain View earlier this year served as a launch for the project.

“It’s all for naught if we don’t have that engagement,” said McArthur. “At the end of the day, [we want to] get more kids to use active transportation to and from school.”

Ontario Active School Travel is an Ontario-wide program dedicated to children’s mobility, and is funded by Green Communities Canada. Their website states active school travel can improve the physical and mental health and wellbeing of children, increase their cognitive function and social development, and improve safety at school zones by reducing traffic and congestion.

If you are a parent of a public elementary school student in Collingwood keep an eye out for the survey coming next month, your feedback will help develop an action plan for safe walking routes around local schools.

In addition to the Simcoe County District School Board, the Simcoe Muskoka District Health Unit, and Town of Collingwood, there are more partners involved in the On the Move project, including District of Muskoka, Bracebridge, County of Simcoe, Midland, Clearview, Wasaga Beach, Barrie, Innisfil, Bradford West-Gwillimbury, and the Environment Network.

Mountain View is on the move for international walk to school day
Oct 2, 2019 10:43 AM
Comments
We welcome your feedback and encourage you to share your thoughts on this story. We ask that you be respectful of others and their points of view, refrain from personal attacks and stay on topic. To learn about our commenting policies and how we moderate, please read our Community Guidelines.