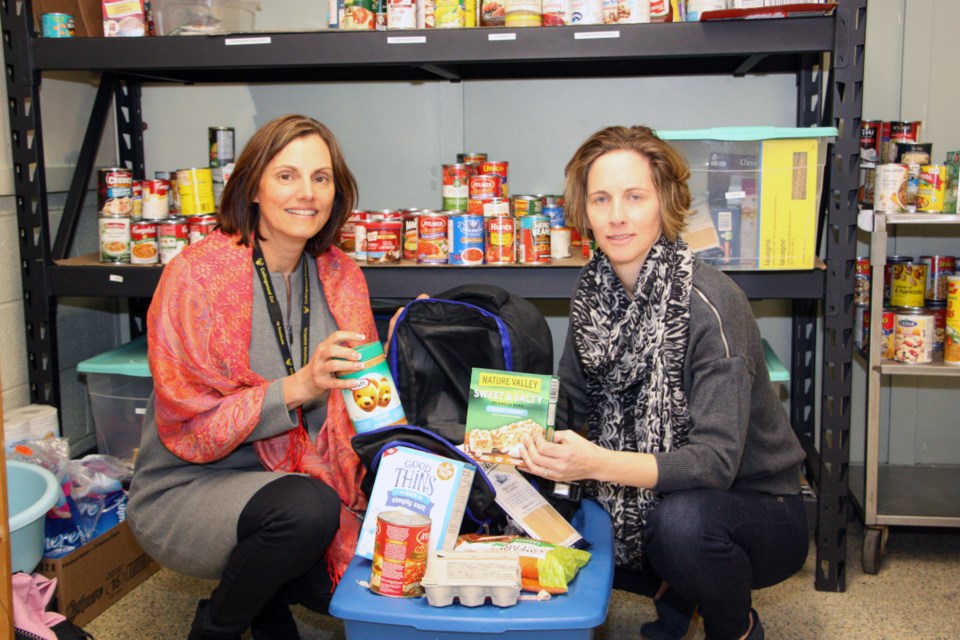 Charlene Scime and Kelly Nicoll work on packing a backpack full of food for the Helping Hands Backpack Program at CCI. Erika Engel/CollingwoodToday

Today when the final bell rings at school, a dozen or so Collingwood high school students will pick up a backpack of food on their way out the door, the contents of which will feed the student and his or her family for the weekend.

The Backpack for Learning program first started at Georgian Bay Community School in Meaford, and Collingwood Collegiate Institute (CCI) now has a program of its own called Helping Hands Backpack Program.

The program works by supplying students whose households are currently experiencing some level of food insecurity with a backpack full of food on Friday afternoon. The backpack will contain canned goods, a brick of cheese, fresh fruit, eggs, and vegetables, and often a meal like chili prepped by the school’s hospitality department using ingredients donated in a student-run, school-wide food drive. The class has also used donations of canned chickpeas to make hummus for the backpack program.

She attended an event about a year ago held at CCI in conjunction with the local health unit meant to raise awareness around food insecurity.

“It was a stark introduction,” said Scime.

According to a Caandian Community Health Survey, about 12 per cent of Simcoe-Muskoka households reported a level of food insecurity at least once in a 12 month period. That’s about the average across the province.

For the sake of the survey, food insecurity refers to the concept of worrying about running out of food and/or having a limited food selection because of lack of money for food.

Food insecurity is highests in one-parent families, with 24 per cent reporting marginal, moderate, or severe food insecurity for the survey.

Though there are food banks in Collingwood, they are meant for emergency help, and not meant to sustain a family experiencing more long-term food insecurity.

Scime said she heard a story of a student in Meaford who would stay home from school when her family ran out of shampoo or if she didn’t have any feminine hygiene products. One Collingwood student living with their grandparent said the food program meant a lot because they hadn’t been eating lately.

“We see kids, often, whose families are struggling financially and who need help for a field trip, or sports team,” said Scime. “And we recognize for every student who tells us they need help, there are many who don’t tell us.”

Scime reached out to the teachers for help starting the backpack program and Kelly Nicoll stepped in quickly. Her friend and fellow teacher Amy Teed-Acres runs the Backpack Program at Georgian Bay Community School, so Nicoll was eager to help start one at CCI.

Nicoll prepares the backpacks each week and works with other teachers in the school to find students who could use the help.

“We don’t always know, and it’s hard to know when a student hasn’t opened up,” said Nicoll. “It is a stigma for the students and there’s a stereotype for the adults to get over too. It’s not always the students who are not doing well or come from a broken home.”

She sends the kids home once a month with toiletries and always has feminine hygiene products available. On long weekends or holidays, Nicoll will pack extra food. A store of school supplies donated by the local OPP is also well-stocked in the Backpack Program room.

One student was moved to tears at being given a new set of pencil crayons in a metal tin. Though she’s in high school, she had never received a set of her own and always wanted one.

Another student who received a backpack told Nicoll she was excited because she knew her dad would be happy to receive the food.

“It has helped us connect with kids in a different way,” said Scime, adding there’s up to 15 kids receiving backpacks of food on most Fridays. “I know it’s making a difference.”

While at school, there’s a free breakfast program and a cart full of hot food is left in the cafeteria at lunch for anyone who needs lunch.

“When the kids come to school there is always food for them,” said Nicoll. “The backpack program is filling a gap with food for the weekend ... By sending the backpack home, we're helping the kids and their families."

There’s also a bin of homemade snacks such as muffins, protein balls, and granola bars prepared by the hospitality classes and available for any classroom. So far, 31 bins of fresh, homemade goods are delivered to classrooms at CCI. Some teachers pass the bin around, others leave it in the classroom on a desk for students to help themselves.

“It’s kids making food for each other,” said Scime. “You make food together, you eat together, that’s family.”

Recently, Scime made a presentation to 100 Women Who Care, a group of about 170 women who get together four times a year to choose a charitable initiative they can contribute to. Each member contributes $100 for a total of $17,000 for the program. Scime made the pitch for CCI and Georgian Bay Community School’s backpack programs and was successful. The two schools will share the cash. Scime expects the CCI program will cost about $11,000 to operate this year based on a projected growth to 30 backpacks.

Nicoll said she welcomes food and toiletry donations. She has particular need for canned tuna and salmon, peanut butter, mayonnaise, apples, granola bars, pasta and tomato sauce, and oatmeal. The program also gives out perishable food like eggs, cheese, yogurt, and produce, but donations of perishable food should be coordinated through Nicoll.

The school can also issue a tax receipt for monetary donations made to the program. Cheques can be made to CCI Activities and designated to the Helping Hands Backpack Program attention Charlene Scime.