Mayor Brian Saunderson got into a back-and-forth exchange with a resident complaining about what he considered 'transparency' issues with Sunset Point park
0
Sep 13, 2019 1:30 PM By: Erika Engel 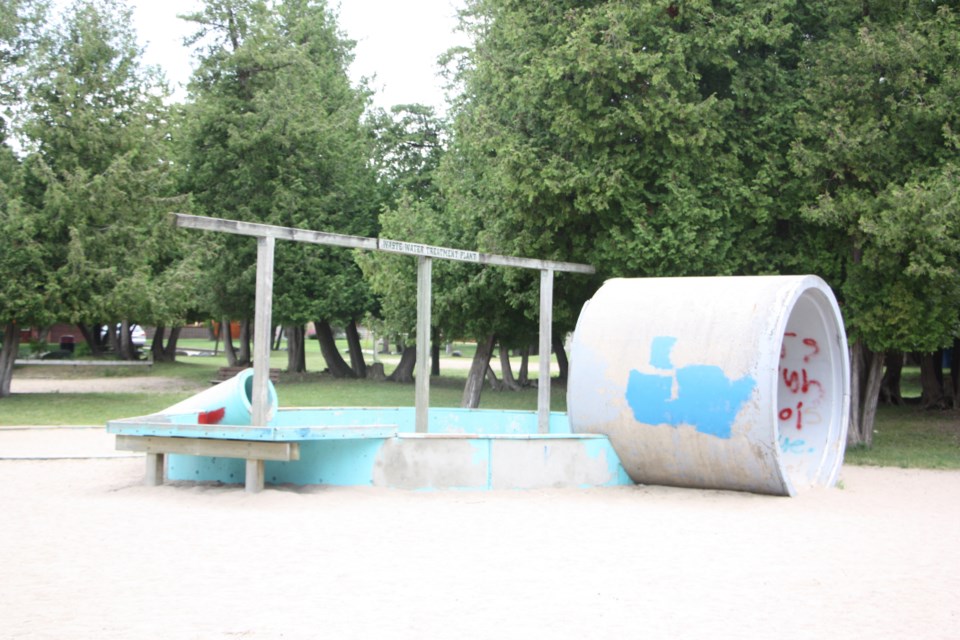 A resident unhappy about the public consultation process for Sunset Point park had the mayor defending council transparency in a public back-and-forth exchange.

During a Corporate and Community Services Standing Committee meeting, Monday night (Sept. 9) Sunset Point resident Edward Rowe got up to the podium to speak during the public delegation period at the end of the meeting.

He said he hadn’t planned on speaking, but decided to anyway.

“I’m here and I have a pet peeve,” he said, reminding the committee he had previously asked for the results of an online survey asking residents for ideas for a new Sunset Point park and playground.

The survey, which went out in the spring, garnered more than 700 responses from residents and was largely open-ended questions asking residents to write-in ideas for the new park to replace the old Enviro Park at Sunset Point.

Rowe said he has filed a Freedom of Information request to get the survey results, which was denied. He is appealing the decision.

“Every one of you said you were going to be more transparent and open,” said Rowe at the Sept. 9 meeting. “I don’t know why you ask for people’s input and then you don’t share it.”

Councillor Bob Madigan, chair of the standing committee thanked Rowe for his comments.

“I can assure you I am one of the most transparent people you will meet,” said Madigan.

“Then why did you vote against it when it came before council?” asked Rowe.

At a July 22 council meeting, a motion from Councillor Tina Comi to release “raw data” from the online survey results failed with the only favourable votes coming from Comi and Councillor Yvonne Hamlin.

Mayor Brian Saunderson, a member of the committee asked Madigan if he could comment. Madigan agreed.

There was no second vote at the July 22 meeting, but prior to the first vote, Collingwood CAO Fareed Amin explained staff would typically include results of a survey in the relevant staff report once they have had a chance to go through the results to pull out the relevant data and filter out private or unrelated information. The motion voted down on July 22 was to release the raw data from the online survey responses.

Rowe’s opinion is the survey responses are relevant now and not when the staff report comes forward with recommendations.

“With all due respect, that [staff report] would be after the event,” Rowe said during the committee meeting. “I just don’t know why you don’t want to share [the results].”

Saunderson interjected, not asking this time for permission from Chair Madigan to speak, as per the committee’s rules, which were previously stated in the meeting.

Rowe responded: “You're going to share it after the decisions are made, that’s what you’re saying.”

“No. The way that it works here, Mr. Rowe, is we do public input sessions, those go to staff, staff comes back with recommendations and council votes on it,” he said. “That has never changed. What you’re actually seeing now with this council through the standing committee is there is public discussion before these are happening.”

Saunderson continued with a jab at the council from two terms ago.

“Because in the 2010 to 2014 session there would be a notice of motion put on the table, they would waive notice and they would vote the same night so that the public would never have an opportunity to respond,” said Saunderson. "So we are putting in place opportunities for you to respond. We’re engaging you. I guess you’re taking issue with the timing of the release, but it will be released to you before decisions are made. Because it can’t come to council before it goes through a standing committee.”

Rowe said he didn’t understand why, after getting 700 participants in the online survey, the town was still trying to hold public sessions “for 20 people.”

The mayor jumped in again.

“Not all people are online,” he said, when Chair Madigan interrupted.

“This is what committee is for,” responded Saunderson.

“It’s not back-and-forth,” said Madigan. “Everything goes through the chair, whomever that chair may be.”

Madigan thanked Rowe for his comments.

Previously, Director of Parks, Recreation, and Culture Dean Collver said staff combed through the survey responses and used it to build further public engagement questions and discussions by way of open public sessions and specific meetings with children at local schools.

There was also a session with the Children’s Treatment Network to hear from youth with disabilities discuss what accessibility options would have helped them enjoy playgrounds in their childhood.

Since then, Collver has said the survey results will be included in the staff report that goes to committee with recommendations for the playground and park design at Sunset Point.

Kids suggest pet stable, lava maze for new Sunset Point playground
Aug 15, 2019 1:01 PM
Comments
We welcome your feedback and encourage you to share your thoughts. We ask that you be respectful of others and their points of view, refrain from personal attacks and stay on topic. To learn about our commenting policies and how we moderate, please read our Community Guidelines.