New Out of the Cold program leads come before council to request funding for part-time emergency shelter co-ordinator; Home Horizon in final phases of securing an additional location to house more youth
Jun 29, 2019 8:57 AM By: Jessica Owen 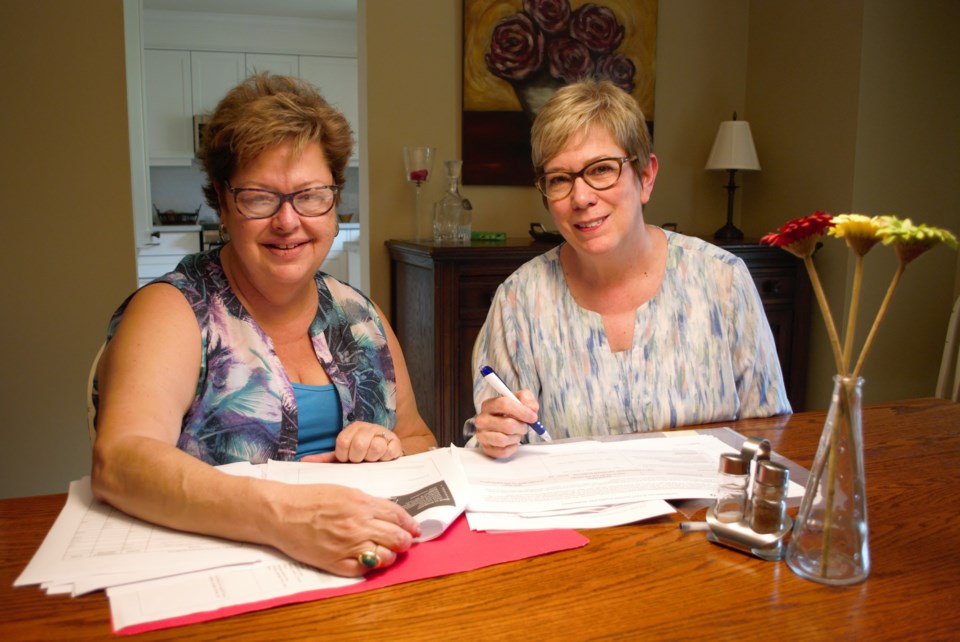 Marg Scheben-Edey, chair of the Out of the Cold initiative and Pam Hillier, executive director of 211 Community Connection came before council earlier this month to ask for funding to help support a new Out of the Cold program in Collingwood. Jessica Owen/CollingwoodToday

Recent strides made by local community organizations in Collingwood will hopefully make a big difference to the area’s homeless.

Earlier in June, Marg Scheben-Edey, chair of the Out of the Cold initiative and Pam Hillier, executive director of 211 Community Connection came before Collingwood council to give a deputation on their work toward establishing a temporary Out of the Cold shelter program in Collingwood, with the goal of starting up in November 2019.

The group has compiled a rough budget and are hopeful council will be able to pony up $90,000 for the project -- which is 39 per cent of the total budget -- to hire a part-time co-ordinator and two full-time equivalent positions to oversee temporary shelter operations for three years.

“I think the critical point is, the only way I can see this being a reality for this winter is with the support of the municipality because of the late time frame,” said Scheben-Edey in an interview this week with CollingwoodToday. “Even if we get the support of the municipality, there’s going to be significant support needed from the community for fundraising, volunteer work and donation of supplies we’re going to need.”

Scheben-Edey, a local Realtor, started the TRACKS Employment Services program in Collingwood in 1986, so she was already aware of the barriers people in the area can face when it comes to getting a job and housing. However, she was spurred to action by a series of articles she read in CollingwoodToday in November drawing attention to homelessness in the area.

“This has always been a concern of mine, but it was really re-ignited by those articles,” said Scheben-Edey. “Collingwood does not have an emergency shelter.”

The South Georgian Bay chapter of the Simcoe County Alliance to End Homelessness (SCATEH) is behind the push for the new program, which is planned to run from November until April for the next three years until a more permanent shelter can be established.

“We’re using a model that’s a little bit different than other Out of the Cold programs because we see this (project) as being a short-term (solution),” said Hillier.

Scheben-Edey says the process for anyone attending the shelter would be the same: people would attend the faith-based location, go through an intake process where they would receive a medical assessment, they would receive overnight accommodation and in the morning, a shower and breakfast before being sent on their way for the day.

“When we talked to other shelters, we were told that’s the main thing they care about: getting a good night’s sleep in a warm and safe environment,” said Scheben-Edey.

While the faith-based community has stepped up toward providing a venue, there's a hold on hammering out other details of the program funding is secured.

“We have started doing presentations asking different groups for funding, but we kind of have everyone waiting until we have a commitment (from council),” said Hillier.

After the three years is up, the hope is to have developed in that time a 24-hour-a-day, seven-days-a-week emergency shelter in Collingwood.

“That would be for anyone, youth, families, individuals,” said Hillier. “We didn’t want to go to the town and say, ‘We have a problem and you need to fix it.’ We have really hard-working individuals and agencies here that really care, we have new federal dollars, we have experience from other communities. They’re a part of the solution.”

The new Out of the Cold program isn’t the only new support coming to help the homeless locally.

Dwayne O’Connor, executive director of Home Horizon, is part of the task group for the Out of the Cold program.

O’Connor says Home Horizon has also started the leg work on a few new initiatives within the past six months, to branch out from just supporting homeless youth through the Barbara Weider House, their transitional housing program.

One such initiative is a home-sharing program where community members who have extra space in their homes can sign up to take in youth boarders who find themselves in need of emergency shelter.

As of now, two people have signed up to open their doors, with the hope being that more will add their names to the list.

“We’re just going through the process with them and actually vetting the youth. Safety is the primary key,” he said.

O’Connor says the homeless population of Collingwood tends to grow in the summer months due to people flocking to the area for the multitude of seasonal jobs available, which is the most common situation he sees in the South Georgian Bay area.

“Most of the time, they’re actually looking for work. They’re trying to get out of that situation. None of them want to be in that situation. Even when you go to a shelter where they give you everything, no one wants to stay there because it’s not safe. There’s a lot of theft going on,” he said.

O’Connor says many of the homeless that gravitate to the area come due to the abundance of seasonal work here.

“They don’t come here just because it’s gorgeous,” said O’Connor. “If they can get their foot in the door of say, a resort, and they start working there maybe as a cleaner or cook, once they get on as a permanent, full-time employee, everything’s so much better. That’s what they’re shooting for.”

New this year, Home Horizon has expanded their services that had previously been in place only for youth living in the Barbara Weider house to anyone in the community who is interested in attending, including their budgeting, employment and cooking workshops. In February they also started a family reconciliation program, where they aim to bring together youth at risk for homelessness with their families to see if a solution can be found before the youth end up on the streets.

“Usually it happens through word of mouth, people just show up at the door,” said O’Connor with a laugh. He adds that anyone interested in attending can contact Home Horizon directly through their website.

O’Connor says Home Horizon is currently in the midst of possibly adding an additional location to their organization, which would see five more rooms available as transitional housing for youth. He says a property was donated to the organization recently for that purpose, and an official announcement is expected to be made sometime this summer once all final paperwork and processes are complete.

“If it works out, we’ll have more space for people and be able to provide better services,” he said.

There’s one piece of the homelessness-solution puzzle that O’Connor says is lacking not just in Collingwood, but everywhere across Canada.

“Bringing in a mental-health and addictions worker here is difficult,” said O’Connor. “We offer them the space to teach and they’ll show up one time and then disappear. It’s not because they don’t want to be here, they just don’t have the resources to be here.”

“There are a lot more people here that need the services than people would ever imagine,” said O’Connor.

In regards to Scheben-Eady and Hillier’s ask at Collingwood council, chief administrative officer Fareed Amin is expected to report back on the request at a future strategic initiatives standing committee meeting. While the group isn’t yet looking for volunteers or donations until funding from the town is secured, if you’d like to help, contact 211 Community Connection.