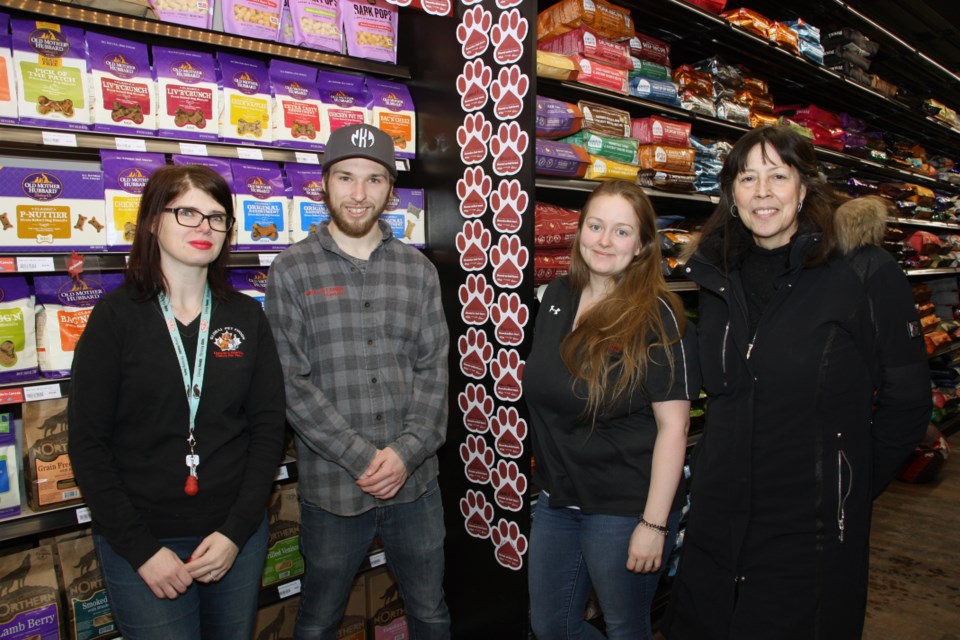 Staff at Global Pet Foods in Collingwood including Ben Love, show off some of the paws on the wall indicating donations made to the Show Us Your Heart Campaign. On the far right is Barbara Foster, chairperson of the fundraising committee for the Georgian Triangle Humane Society. Erika Engel/CollingwoodToday

This week, a local pet food store is getting into the spirit of Valentine's Day with a lot of love for animals in shelters.

Global Pet Foods in Collingwood and Wasaga Beach is running its annual Show Us Your Heart campaign. They are encouraging customers to donate cash at the register and sign their name to a paw print that gets posted on the walls throughout the store. Global Pet Foods will donate an additional $1 for every donation made at the two stores.

Anyone making a donation will also receive a sample of dog treats or tin of cat food as a thank-you gift from Global Pet Foods.

Ben Love, whose family owns both stores, said it's a great campaign and he's excited to see the customer response and funds raised through the initiative. The money collected at the two local stores gets donated to the Georgian Triangle Humane Society (GTHS), and has been since Global Pet Foods in Collingwood and Wasaga started participating in the campaign in 2016.

Barbara Foster, chair of the fundraising committee for the GTHS, said the Global Pet Foods fundraiser has brought in $4,000 for the local shelter since it began in 2016.

So far, the Collingwood store has collected more than $650, and there's still one more week of the campaign to go.

According to Love, Global Pet Foods Canada also donates $75,000 from the corporation to shelters across the country during the Show Us Your Heart campaign. He said the total is divided among the stores and donated to the shelter chosen by the store.

"We at GTHS are very fortunate to have community-minded people and businesses like Global Pet Foods who want to support us," said Foster. "They spend their own time, money, and effort on great events like this."

Collingwood and Wasaga Beach Global Pet Foods locations will be collecting donations for Show Us Your Heart until Feb. 21.

Springwater teen dies in snowmobile accident
Feb 17, 2020 11:52 AM
Comments
We welcome your feedback and encourage you to share your thoughts on this story. We ask that you be respectful of others and their points of view, refrain from personal attacks and stay on topic. To learn about our commenting policies and how we moderate, please read our Community Guidelines.