Local loops and lattes mapped out in new hiking guide 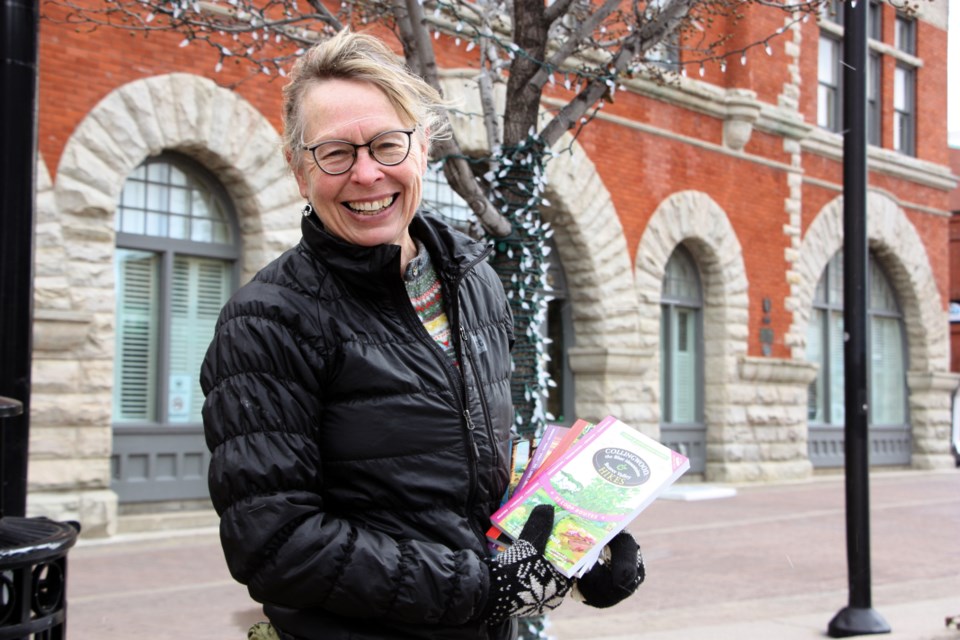 Author and avid hiker Nicola Ross made record time trekking the countryside of Collingwood, The Blue Mountains and Beaver Valley this spring and summer, producing a book about her hikes in under five months.

The hiking guide is the sixth she has written, but, usually, they take about a year and a half to complete. But Ross was counteracting some cabin fever. The Caledon native took her first hike in the local area at Pretty River Provincial Park on the very day provincial parks reopened to the public.

“It was like getting out of jail,” she said.

She carried on exploring and compiling 35 loop routes for her book.

“What else was I going to do?” she laughed.

Five months later she held Collingwood, the Blue Mountains, and Beaver Valley Hikes: Loops and Lattes in her hands, fresh from the printer.

Loops and Lattes is a series of six hiking guides authored by Ross. They include her own maps of loops she’s pieced together from local trails with information like the length of the trail, the difficulty, how long it will take to hike and what sorts of things one would see along the way. All hikes are beta tested by Ross' friends and acquaintances.

Each guide also features an original painting commissioned by Ross for the cover. Each painting is by an artist from the area she's covered in the guide. For the Collingwood edition, artist Kara McIntosh created the cover painting. She has a studio at the Tremont.

Ross is a latte drinker, and since the hiking guides explore urban areas more than rugged uninhabited terrain, some of the loops also include places to stop for lattes – Ross' typical coffee order.

Thus the series is called Loops and Lattes.

It began with hikes around Ross’ stomping grounds – Caledon – and was meant to be a one-off. “I thought, ‘that was really fun,’” said Ross.

She grew up hiking on her family’s 100-acre property. Anytime her family gets together, a hike is always part of the agenda.

The hiking guide was also successful “beyond expectation” so she created another guide for hikes in the Halton Region. Then came Dufferin; Hamilton and Brant County; Waterloo, Wellington and Guelph; and finally Collingwood, the Blue Mountains and Beaver Valley.

“I wanted to do this area for a while,” said Ross, noting one of the main reasons she was excited to tackle Collingwood area was the vistas that drop down to Georgian Bay.

“I love all the unopened road allowances,” she said, noting Collingwood and area is lucky to have remained relatively rural compared to places like Caledon.

For the latest guide, she added a new category for her hikes – elevation. It was something she considered necessary for the hilly terrain.

The hikes in the Collingwood guide range from 1.7 km to 14.2 km with three difficulty levels. They are as far away as Wasaga Beach on one side and Bognor on the other.

“It was great hikes out here,” she said.

Her goal with the guide is to help all people get out and hike more, whether it’s in their area or in a new area.

Her love of the outdoors extends to her career, which included environmental writing and publishing. Her hiking series, is what she calls a “soft sell” advocacy for environmental preservation.

“I thought if people saw how beautiful our countryside was, they’d be more apt to care for it,” she said, and she went with a local approach intentionally. “If you know the area around you, you’re more likely to protect it.”

The local Loops and Lattes hiking guide is available for sale in Collingwood at Coriander, Dags and Willow, Read it Again, and Skiis and Biikes. In Thornbury, it’s available at Goldsmiths and Jessica’s Book Nook. In Meaford, you can buy the book at Grandma Lambes. It is not sold on Amazon or Indigo, but you can buy it online from Ross’ website at loopsandlattes.ca.

Residential school survivors' group launches petition
Nov 28, 2020 7:00 PM
Comments
We welcome your feedback and encourage you to share your thoughts. We ask that you be respectful of others and their points of view, refrain from personal attacks and stay on topic. To learn about our commenting policies and how we moderate, please read our Community Guidelines.