‘There seems to be mixed messages going around, and some people are just not sure what’s allowed and what’s not’: local cyclist
0
Aug 8, 2018 8:30 PM By: Jessica Owen 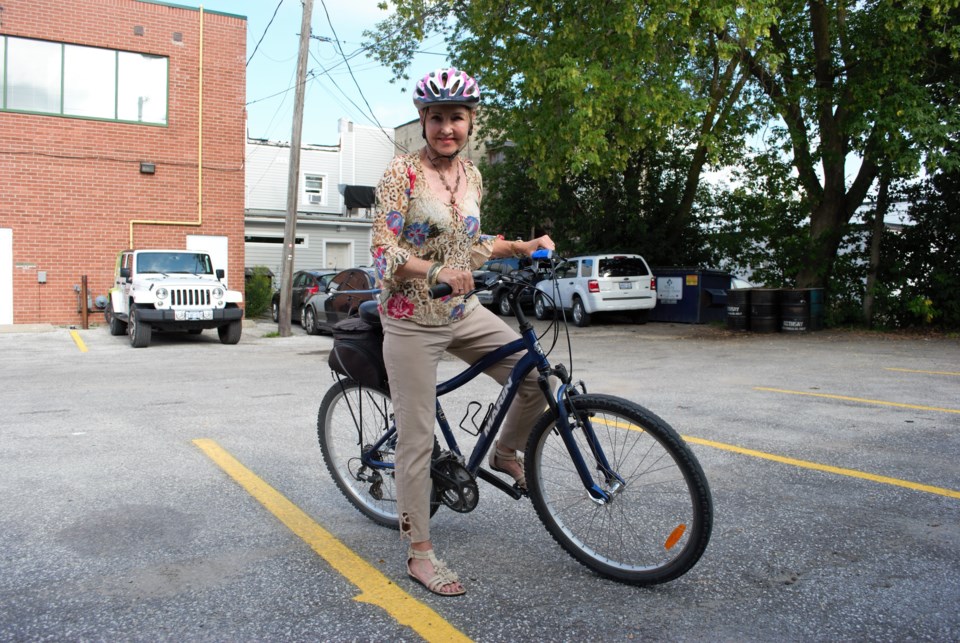 Coun. Deb Doherty is an avid cyclist and advocate for active transportation in Collingwood. Jessica Owen/CollingwoodToday

While the sun is shining and the weather is beautiful, you might be tempted to dust off your bicycle and take it for a spin.

While cycling is proven to be excellent for your health, the Simcoe Muskoka District Health Unit as well as the local cycling club want residents to stay safe this season.

“It’s something I’ve always enjoyed for recreation and transportation,” says Simcoe Muskoka Medical Officer of Health Dr. Charles Gardner. “I believe in it from the point of climate change, environmental protection, physical activity and healthy living. It’s something I insist on.”

Some suggestions Gardner makes for improving safety for cyclists across the county is adding barriers to separate bicycle lanes from traffic lanes, cyclists being more careful in planning and selecting their routes to avoid highly trafficked areas, and being aware of the more risky locations in town to cycle.

“To do that, you need political commitment, and you need plans fulfilled and made.”

Gardner is hoping drivers will also be accommodating and respectful of the new influx of cyclists on the road the warm weather brings.

“We have every right to be on the road under the law as much as they do,” says Gardner, adding that drivers are required by law to leave a one-metre distance between them and cyclists.

Dean Collver, director of parks, recreation and culture for the Town of Collingwood, says that over the years the town has invested heavily in cycling friendly infrastructure – from roughly 70 kilometres of integrated and accessible trails to bike lanes and efforts toward bike storage.

“Having said that, we are also continuously seeking to improve and so have secured a grant through the Ontario Municipal Commuter Cycling Program (OMCCP) which, at the front end, will provide a cycling plan for the community,” says Collver.

Collver says the expectation is for the cycling plan to inform the development of facilities and infrastructure investments that the town can make going forward.

“It is also expected that the plan will provide some insights into the current status and future potential of our cycling community,” he says.

The second part of the OMCCP will see some investment in facilities to improve cycling conditions in Collingwood. Collver says town staff are working toward the delivery of the plan by the end of this month.

“The more infrastructure you build, the less conflict there is between motorists and cyclists,” says Doherty.

The trails in and around Collingwood were started about 26 years ago when Collingwood, the Town of the Blue Mountains and Meaford worked together to build the Georgian Trail. More recently, the Town of Collingwood insists that all new residential developments must include trails, bike lanes or bike routes.

Doherty also points to future initiatives being undertaken by the town, including new signage that will be installed illustrating the location of common bike routes and warning motorists and cyclists which roads are used more by both transportation options. The signs were made possible by a donation from an anonymous source.

“You’ll see these going up shortly, throughout the community,” says Doherty.

Noelle Wansbrough, a member of the Collingwood Cycling Club, says that the infrastructure in place within the Town of Collingwood doesn’t affect the club as much because generally, they tend to cycle on rural roads outside of city limits.

Wansbrough says the main issue within the cycling community at the moment is education.

“Education for all road users needs to be ramped up on a massive level,” says Wansbrough. “I’m talking billboard campaigns, pamphlets put in everybody’s mailboxes about what drivers and cyclists are supposed to do out on the road. There seems to be mixed messages going around, and some people are just not sure what’s allowed and what’s not allowed.”

Wansbrough says that misconceptions about different road users’ responsibilities have put a lot of cyclists at risk.

“A bicycle is a vehicle on the road, and can take a whole entire lane if they wanted to. A lot of motorists do not know that. They think that we’re supposed to be as far to the right as possible, pretty much in the gravel,” she says. “(Drivers) need to look at cyclists on the road the same way as if they came across a piece of farm machinery on the road, or a little old lady that’s driving 20 kilometres an hour. You need to just slow down and wait to do a proper lane change to get around that cyclist.”

Wansbrough hopes to see a change in reaction from drivers. While she concedes there are some drivers that share the road appropriately, the actions of the small percentage who don’t share well have the potential to end in tragedy.

“We are vulnerable road users. If we get hit, we might die,” she says.

Wansbrough points to the common misconception that when drivers pass a cyclist, they need to pass within the same lane.

“You can go into the oncoming lane at any given time if you have a clear view,” says Wansbrough, adding that it is safer practice to do so. She points to instances where two vehicles try to pass a cyclist at the same time.

Wansbrough says that cycling has really exploded in the Collingwood community over the past 10 to 15 years.

“Tourists who come to the area need to wrap their head around the idea that, they’re coming to a major cycling destination. Expect to see cyclists,” she says.

There are a few things local motorists can do to help make the rural roads surrounding Collingwood safer for cyclists, such as route planning.

As an example, Wansbrough points to 10th Line as the only route for cyclists to get to Creemore or Pretty River, as they don’t use highways.

Tips from the health unit

- Cyclists are advised to obey all traffic laws, signs, and signals, always ride on the right in the same direction as traffic and ride in single file, except when passing

- Be aware of the weather

- Follow the traffic rules and look in all directions before entering into a new space.

- Don’t assume traffic can see you

For more safety tips from the health unit, click here.

'You can't be angry around a dog,' teens welcome four-legged study buddies
Jan 23, 2020 11:50 AM
Comments
We welcome your feedback and encourage you to share your thoughts on this story. We ask that you be respectful of others and their points of view, refrain from personal attacks and stay on topic. To learn about our commenting policies and how we moderate, please read our Community Guidelines.