Joining the family business while making it her own 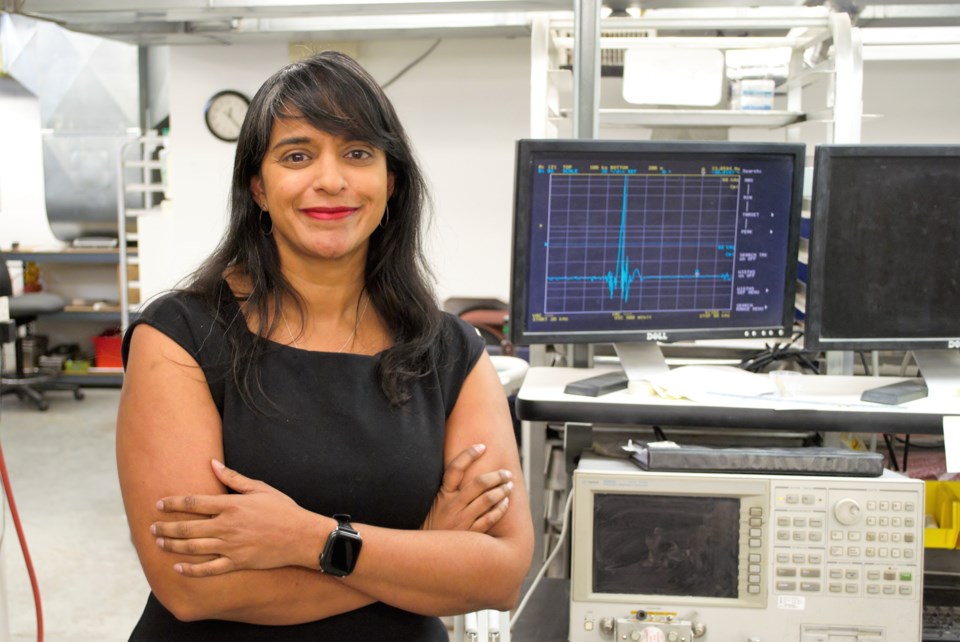 While a local CEO spends a lot of time jet-setting around the world making business deals, nothing quite compares to her hometown of Collingwood.

For this week’s edition of People of Collingwood we sat down with Niru Somayajula, President and CEO of Sensor Technologies Ltd.

Q: What is your background? Have you always lived in Collingwood?

A: My parents moved me here just before I turned three. I grew up here. I went to Cameron Street Public School and Collingwood Collegiate Institute. I left for university in ’99 and came back in 2007.

So I switched into science at Western University. I finished a degree there in Geophysics. I also did a Masters at the University of Toronto.

After that (in 2007) I was engaged and my fiancé was an engineer and we moved back to Collingwood.

My parents still live in town too.

Q: What led you to taking on the position of President and CEO of Sensor Technologies?

A: This was my parents’ company. When I came back from grad school, my parents were seriously considering selling the company. They started it in the 1980s, so I kind of grew up in this business. It’s kind of in my blood. (laughs)

They asked me to come in and help them sell it. I came back as an operations manager. I’d had a bit of experience in managing groups because I had run the production line for about six months.

The deal ended up not going through. So, instead of selling the company to a big multi-national company, they sold it to me with a few partners in 2011.

At that point, I took my dad’s title and switched gears a bit.

Q: Can you talk a little bit about the progression of this company as a family business?

A: As a kid, I never intended to come back here. It’s a small town; I really wanted to get as far away as possible. Typical kid. (At the time), it seemed too small and I wanted to see more of the world.

My parents were good about having me do summers abroad. They would help me find people who could help me find jobs. I had internships all over the world. I was pretty fortunate that I could see the world. I had an exchange in high school so I could learn French. That opened a lot of doors for me.

Coming back wasn’t what I expected for myself.

Working together (with my family) was interesting though. We had two completely different management styles. There’s also the family dynamic where they might not trust their kid who was 27 years old at the time and had little life experience. (laughs)

We had a couple of years of overlap where I came in as operations manager to learn about the business.

When that original deal fell through, we were trying to figure out how to deal with it.

My mom took me aside. She’s managed the finances of the company from Day 1. She has the street smarts. She’s an economist by background, she has a Masters in economics. She’s a smart woman.

She said, “You know Niru, I’m going to give you some life advice. The person who manages the money will manage the company.”

My dad always really wanted me to be technical so my degree is in physics. My mom saying that kind of resonated with me. That kind of led me into what I’m doing now.

I hired a team of really smart technical people. I don’t think that’s where I was meant to be. I think I have more of a business head, and I’m good at talking to people, I think. Doing sales and business development and managing people is more what I’ m suited to.

I think it turned out OK. I made plenty of mistakes along the way, but I figured it out. I probably got a few things right. (laughs)

Q: Can you explain exactly what Sensor Technologies Ltd does?

A: When you’re trying to communicate above ground over long distances, it’s done through radio or satellite signals. Underwater, it doesn’t work the same way.

What we make is underwater communications stuff. So, sensors.

Either, someone is trying to speak underwater, or they’re trying to listen underwater. That’s basically the crux of it. They’re called fancy terms like hydrophone or transducer.

It’s also used for a little bit of defence.

Q: How much business does your company do annually in terms of dollars?

A: Roughly between $4 and $5 million a year Canadian.

Q: Are you contracts primarily defence contracts, or other kinds of contracts?

A: I would say it’s split: a third oil and gas, a third defence and the rest is mixed between fishing uses, like on the fish conservation side they’ll tag fish with communication sensors and track their migration patterns and health, or commercial fishing.

Q: As your dad used to run the company, do you notice any differences to how you’re treated as a CEO due to gender or age?

A: It took me a while to earn the trust of the people here, especially some of the long-term people who were used to dealing with my parents. I’ve got a different management style, for sure. It took a little while.

For those who knew me growing up, it probably took a while to adjust.

When I’m out meeting with customers, it depends. There are certain industries that are heavily male, where I’m dealing with men, sometimes of a certain age and a certain race, perhaps.

I’m not white, I’m not over 50 and I’m a woman, so there’s a couple of things and sometimes I get a bit of opposition. I’m finding more and more now that the baby boomers are retiring and I’m dealing with a lot of young people who are engineers or CEOs or purchasing people, and I’m finding it much, much easier now than I would have 10 years ago. The ages are a lot lower and it’s a lot more diverse out there now.

A: That’s a good question.

I think it’s changed a lot, to be perfectly honest. Even in the last three years, it’s totally different than when I first started. Partly because I’ve just grown as a person, and I just have more experience now.

Generally, my style is hands-off. I like to make sure people understand what their job is and then hopefully they’re accountable for what their responsibilities are. I’m not a details person. I’m not interested in micromanaging.

I try and set what the focus is for the company for a year or a couple of years, and sort of let people come up with ideas and then try and guide them if it’s not really where I think the company should be going.

Q: What does the future hold for Sensor Technology over the next five or 10 years? What does it hold for you personally?

My big hairy audacious goal I’ve set for the company is to triple our sales over the next five years.

We added an Atlantic Canada location. We’re in the middle of opening a Dartmouth, Nova Scotia office. As of today we have five employees there with the goal of hitting 15 by the end of the year. We’re expanding the facility here in Collingwood too.

We’ll be adding lots of staff over the next year or two.

For me personally, I’m on the road a lot now. That’s the biggest change in my life. I’m gone probably two weeks a month. I end up doing a lot of video meetings with the people here. I’ll sit in airports, hotels and coffee shops all over the world doing my check ins from different time zones. (laughs) It’s important to keep up with what’s happening here. I’ve put good people in place here. They can run with it; they’re more than capable.

Q: Is there anything else you want people in Collingwood to know about you?

A: I love it here. I think it’s an amazing place to live and work. I had to go to Toronto last week for meetings... it took me two and a half hours in traffic.

Here, I have a four-minute commute. I barely get through one song on the radio. I think that’s awesome.