'Those who are essential workers have a high need to receive this, but when you don’t have an inexhaustible supply of something, you really need to ask yourself who needs it first,' said Simcoe-Muskoka medical officer of health Dr. Charles Gardner
Apr 8, 2021 11:34 AM By: Erika Engel 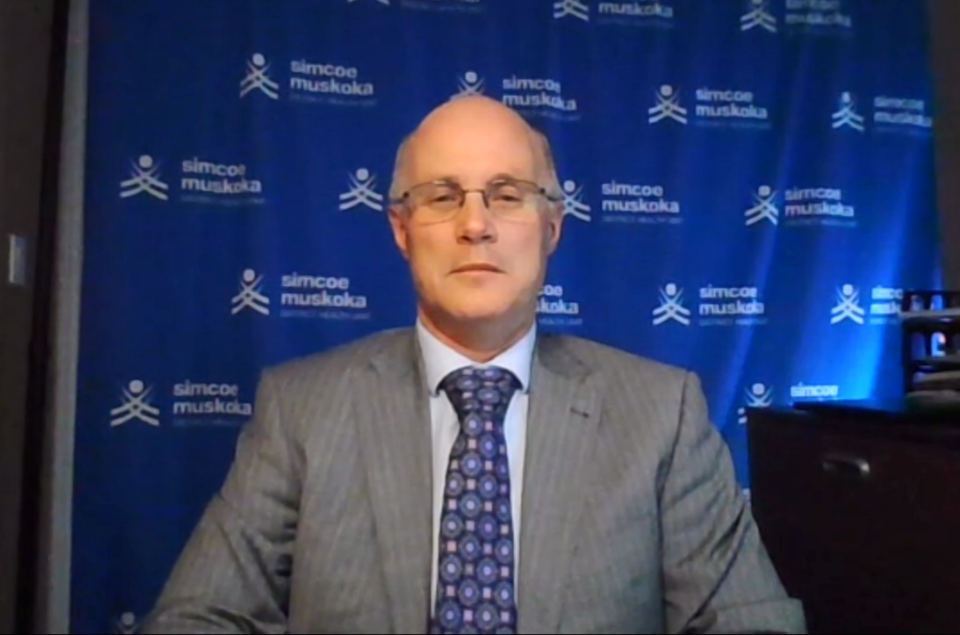 The region’s medical officer of health says it’s important to stay the course when it comes to the vaccine rollout and continue prioritizing those most vulnerable in order to do the most good.

Over the last few weeks, the provincial roll-out and local programs have opened to a wider age group, but a large majority of the region, and even the province, has not received a single dose of any vaccine against COVID-19.

“This is something that takes time … so it’s important that we do it in a sequence that achieves the greatest good by focusing on those who are most vulnerable first and then working our way down to others,” said Dr. Charles Gardner, medical officer of health for the Simcoe Muskoka District Health Unit.

Now that the province has triggered the start of the second phase of vaccine rollout, individuals who are 60 years old or older in 2021 can book an appointment via the provincial booking system.

There is also a program allowing people aged 55 to 59 years old to book an AstraZeneca vaccine through a local pharmacy, or through an Ontario Health Team in Simcoe-Muskoka.

Additionally, this week the province announced it would be targeting hotspots in regions by postal codes. In Simcoe-Muskoka that includes the L3Z codes, which are in Bradford West Gwillimbury.

According to Gardner, the postal code-based hotspots were chosen for their high-incidence of COVID-19 and low prevalence of vaccinations.

The health unit has been charged by the province with providing vaccines to all adults aged 50 years or older in that postal code zone.

“We are preparing to make available to that particular community an immunization specific to this purpose,” said Gardner.

He noted there are other areas he would like to see offered the same immunization priorities, but the postal-code-hotspot program was created and identified by the province, so it’s up to them whether the service could be extended to other spots in Simcoe County.

“We do communicate with the province about the needs elsewhere in our district, and we’re asking for more immunizations, more vaccine if we can get it and we’ll continue that process,” said Gardner.

Phase two also includes people with high-risk and chronic medical conditions. This category is further broken down into three priorities starting with highest-risk, then high-risk, then at risk.

The health unit is working with local hospitals and primary care leads to identify people with the medical conditions listed by the province. Once identified, the health unit or primary care provider will reach out to offer a vaccine.

“Certainly I encourage people to take the first vaccine that they can get, no matter what type it is,” said Gardner. “If you qualify for it and you can get a booking for it, accept it, because the prevalence of COVID-19 in our community is rising, the variants of concern are rising, risk is rising and this is one of the critical ways in which you can protect yourself.”

While arguments are being made that teachers and other essential workers should be prioritized since working from home isn’t an option for them, again, Gardner said there’s no quick solution to that problem.

“Those who are essential workers have a high need to receive this, but when you don’t have an inexhaustible supply of something, you really need to ask yourself who needs it first,” said Gardner. “If we were to discontinue vaccinating those who are most vulnerable right now and shift all of our vaccine to essential workers, we would still take a long time to get through them because they’re a very large group of people.”

The vaccination effort, despite booking glitches and supply delays, is “making progress” in Simcoe Muskoka, according to Gardner.

To date, 18,000 people have received two doses of vaccine, and a total of 111,750 doses have been administered in the region. This includes 7,500 doses of AstraZeneca vaccine administered by family health teams.

According to the health unit, the vaccination breakdown by age group in the region is as follows: