Fundraising efforts par for the course 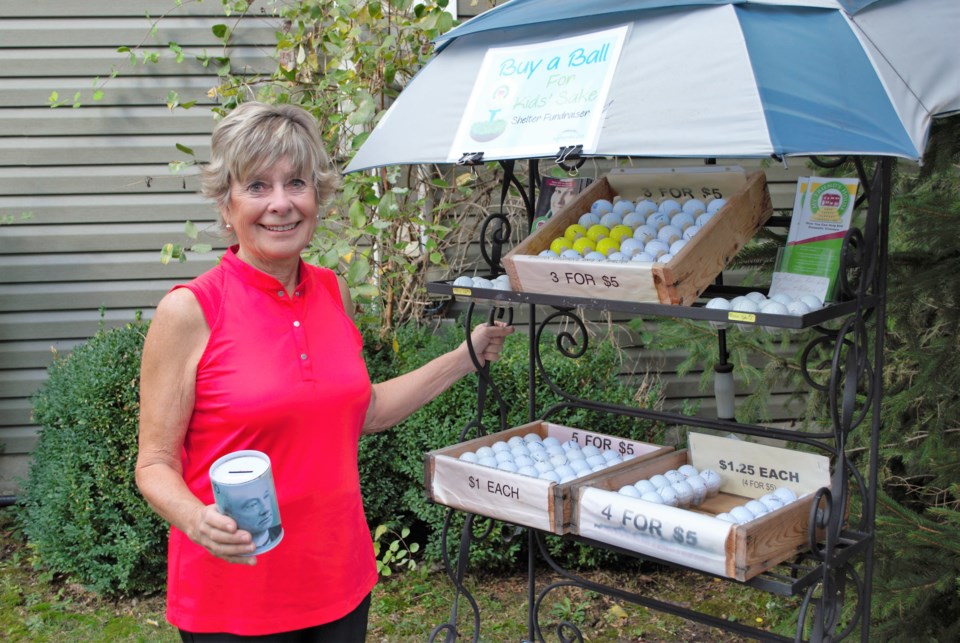 Marylou Gollert started a unique fundraiser 10 years ago where she collects, cleans and resells used golf balls, with the funds raised going to My Friend's House. Jessica Owen/CollingwoodToday

A unique fundraising idea has made a massive difference in the lives of women and children escaping dangerous situations locally.

For this week’s edition of People of Collingwood we sat down with Marylou Gollert, retired teacher, golfer and fundraiser for My Friend’s House.

A: How far back do you want to go?

I was adopted. I recently found out who my mother was. She was a single mom during war time. I think my father was a pilot. She gave me up for adoption at 11 months and a family in Kitchener adopted me. I went to school there, and went to Stratford Teacher’s College and became a teacher.

When I married my first husband, we moved to Ottawa.

We had two girls, and I stayed home with them until they were about Kindergarten age. Then I went back to work. I also got a Bachelor’s and Master’s degree while I was teaching and raising a family.

I worked primarily in the Peel Region area. I taught all grades and most types of special education courses, and did some consulting.

I worked to try to put kids on an even keel to give them a chance to make it in life happily.

I retired, and my new partner Ron and I have been together since about 2000.

I tried out retirement for about three years, and decided it wasn’t enough. I tried golfing and going for dinners but it wasn’t that fulfillment I wanted.

I went back to work for a few more years.

(Through my work), I would try to get kids on an even level. I found (intervention) needed to happen earlier. Once I got to Grade 1, the buck stopped there. I realized that if the kids didn’t have their literacy skills at an average level by Grade 1, they would start to fall behind... and the gap widened. The more you read and write, the better you become at it. A lot of times people wouldn’t have the materials.

I did my thesis on dyslexia. It simply means difficulty learning to read.

I wanted to balance kids’ chances in life.

Q: What brought you to Collingwood?

A: We’re here in the summer months, and we live right beside the (Cranberry) Golf Course. The path between the seventh and eighth holes goes by our side yard.

Ron was building a golf course in Burlington. We lived there for a year while it was being built. The recession hit in 2007 or 2008. The economy was getting really bad, and TD bank was calling in its loan, and they didn’t have another backer so he lost the course.

We were trying to figure out where we were going to live.

My best friend from the ninth grade lives in Collingwood. I had actually met Ron through her and her husband.

We moved to Lighthouse Point for two summers before buying here. We wanted a place on the golf course.

Q: How did you first get the idea for your creative fundraiser?

A: I would golf on the course by our house, and I’d have all these golf balls near the house. At first, I’d just put them in a tray (on the path), and I gave any money that came from it to World Vision.

Sometimes I’d go for walks when there are no golfers and the balls would just be everywhere.

I collect them, wash and scrub them, sort them into the different kinds. Do you know a lot about golf balls?

A: There are various quality of balls. There are some very expensive balls. You can spend $69.95 plus tax on a dozen golf balls. Have you ever heard of Pro Vs? They are one of those kinds. If you bought them in a pro shop, they’re $70.

If you’ve got some, and they look like new... some of them have only been hit once.

When you’re retired, it’s something to do, too.

Sometimes, people would steal them. Balls disappear with no money in the can. Sometimes I think it’s by accident. I’ll get on my bike and follow them when they get off at the next hole.

I had to do it because there are a lot of regulars and if I didn’t, they would just take all the time.

Q: Eventually, you switched from donating the money to World Vision, and instead started donating to My Friend’s House. Why that charity?

A: I was golfing at Cranberry with someone I didn’t know as part of a group. The woman was a social worker at the women’s shelter in Midland, and she oversaw the kids program.

I was talking about how kids come home from school with a list of school supplies parents are required to buy for them. I didn’t think it was right, because it’s against the Education Act, but schools had been doing this for years. I asked her what a mom would do if she didn’t have any money and it was the first day of school.

She told me a story that has led me to working my buns off ever since.

She told me she’d just had a kid there who was in his last year of high school. His mother had taken him and gone to the shelter on the long weekend before school started. He was really smart and was in an advanced level math class. On the first day of school the teacher told students they needed a $70 scientific calculator.

She said he had to drop the course.

School might have helped if they knew the circumstances, but in those cases kids are too embarrassed or mothers can’t tell the school right away if they’ve left (an abusive situation). The social worker’s job is to help the kids with their well-being. She said she was scrounging to get money. She told me, they’re desperate.

I phoned My Friend’s House. I was told that under their guidelines, they’re not allowed to use their government funds to give money to the mothers. They can feed them, clothe them and put a roof over their head, but as far as giving them money so the kids can go and do what they’re regularly doing like hockey or activities... they can’t.

I give My Friend’s House the cash, and they use it to distribute as they see fit to help keep the kids in a good state of well-being for things aside from basic needs. Sometimes they use it to buy YMCA passes for families so they could go out and do something. If it was a kid’s birthday, they would use the money for movie passes.

One thing that expanded the operation, is a guy that works at Monterra Golf heard about what I was doing and gave me a call telling me he had some balls to contribute.

Q: When you look back at all the people you may have helped over the past 10 years who were in a bad place in their lives, how does that make you feel?

A: I sell golf balls at Squire John’s Tent Sale on the July 1 weekend.

The saddest story I ever heard, was there was a man there who seemed to be waiting for others to leave my table. He said he wanted to support this, because his daughter was killed by her ex-husband. She was divorcing him and was living separately. He and his wife raised the two grandchildren.

There’s a dual purpose. It raises awareness so people know there’s a women’s shelter, but also you don’t know if there may be a woman sitting in a golf cart and not aware that facility is here, and could use it.

I don’t like to look back. I’m more in the present, and looking forward. I’ve started looking into (selling the balls online) through Facebook Marketplace.

The good feeling is that it’s continuing. I know it helps. My feelings don’t dwell on that.

I’m passionate about doing it as opposed to being, “Oh, aren’t I good?”

Q: Are you planning to expand?

A: Yes, but to expand, I need some help. What would help me expand is if other people took on helping me with Facebook Marketplace after seeing what I have here.

I really need help with selling. There are some people who help me, but I could use more. People could even just take a bunch if they know where they could sell them.