Tim Fryer told the judicial inquiry he scored Hydro One the highest in the bidding process partly because they offered the most money
0
May 15, 2019 1:30 PM By: Erika Engel 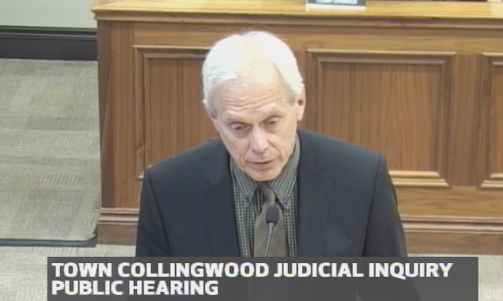 Tim Fryer, former CFO of Collus, took the witness stand on Tuesday, May 14, and is a participant in the hearings with the ability to cross-examine witnesses.

The focus of the judicial inquiry hearings has shifted to the details of the controversial deal between Collus and PowerStream.

On Wednesday, that focus zeroed in on Tim Fryer, former chief financial officer (CFO) for Collus, who was also part of the Strategic Task Team (STT) charged with evaluating the bids spawned by a request for proposals sent out by the town looking for a buyer for 50 per cent of Collus.

Part of Fryer’s testimony centred on what’s called a shotgun clause, which is a type of exit strategy triggered when one party offers to buy the other’s shares. The latter party has the option to turn around and buy the shares of the first party at the same price.

Fryer said he brought up the need for such a clause when he found out the STT was pursuing a deal to sell 50 per cent of shares.

“I remember [Ed] Houghton saying that we were going to be looking to approach this as an equal partner, true partner situation and that it was [Dean] Muncaster who had come forward with that idea,” said Fryer, recalling an STT meeting.

Houghton was president and CEO of Collus at the time. Muncaster was chair of the Collus board. Both were part of the STT.

The shotgun clause could not be instigated in the first two years of the partnership.

This clause meant PowerStream could, potentially, buy the entire utility by offering to buy Collingwood’s shares. The protection, according to Fryer, of a clause like this is that PowerStream couldn’t offer the town a low price without running the risk of the town turning around and paying PowerStream that price for PowerStream’s shares.

Fryer said the shotgun clause ultimately included in the deal was not what he had in mind when he suggested the clause, but he was not involved in negotiations of the shareholder agreement, which is where the shotgun clause was included.

In particular, Fryer said the 20-day period was “restrictive." He said he thought it should have been closer to 120 days.

He said such a decision would require town approval, and there wasn’t enough time to get that approval in 20 days.

“[Council] would be making a decision most likely without public input to any major degree because you’d be rushing through,” said Fryer. “I wouldn’t have wanted to be the financial person accepting that challenge to get information to council to make a decision about whether they should or shouldn’t [sell].”

The request for proposal went out on Oct. 4, 2011. The document includes weighted scoring criteria for various aspects of a bid.

The financial offer, which includes the purchase price and how many shares (up to 50 per cent) the proponent was proposing to buy, the way annual dividends would be decided, and terms of payment, was worth 30 per cent of the bidder’s score.

The part of the proposal dealing with the provision of “strategic and specialized resources,” and support for growing the Collus business was worth 30 per cent of the bidder’s score.

The bids were evaluated using a two-envelope system, the inquiry has heard through testimony.

Fryer told the Commission he thought it should be at least a 50/50 split, where the financial offer was weighted more heavily. He said it was his accounting background that influenced his opinion on the matter.

The inquiry has shown Hydro One offered the highest price for the shares by about $1 million over PowerStream.

Fryer testified he chose Hydro One as the top bidder for the sale process. He told the commission he thought Hydro One had the best monetary offer and “other parameters” that went with the scoring analysis.

“I felt that they were the top offer,” said Fryer.

The offer from Hydro One did not include a shotgun clause. Instead, the exit strategy was a “first right of refusal” meaning the party wishing to exit would offer its shares to the other party first.

The hearing continues all week.

Today participants had a chance to cross-examine Ralph Neate, an auditor formerly with Gaviller and Company LLP (now Baker Tilly SGP LLP). Neate submitted a written affidavit for his testimony.

David McFadden, former chairperson of the Collus PowerStream board, and a member of the STT, also took the witness stand today for examination by Inquiry Counsel Kate McGrann and cross-examination.

Former mayor agrees brother was 'perhaps' too involved in Collus transaction
Apr 26, 2019 10:28 AM

Chadwick faces questions from inquiry on conflict of interest
May 2, 2019 9:50 AM
Comments
We welcome your feedback and encourage you to share your thoughts. We ask that you be respectful of others and their points of view, refrain from personal attacks and stay on topic. To learn about our commenting policies and how we moderate, please read our Community Guidelines.