'Every nook and cranny had some type of history in there,' said Diane Smith, co-owner of the Olde Red Hen restaurant in Collingwood
Jul 2, 2020 7:30 AM By: Erika Engel 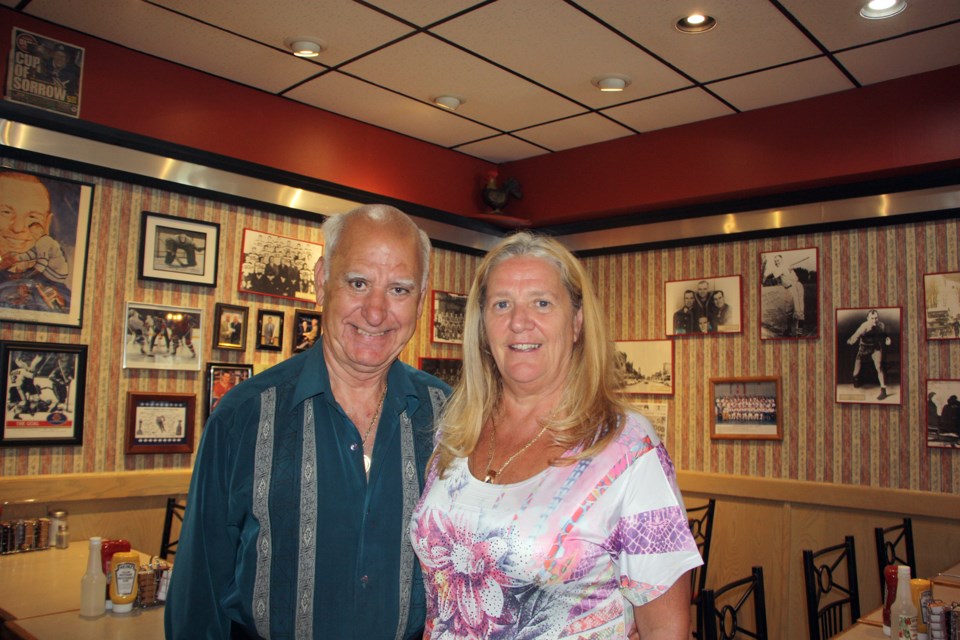 Jim Meridis and Diane Smith are the co-owners of the Olde Red Hen in Collingwood, Ontario. They are standing in front of one of the restaurant's many photo collages in this 2018 photo. Erika Engel/CollingwoodToday

Due to a global pandemic and now a fire, Diane Smith doesn’t know when she’ll be able to see her regular diners again at the Olde Red Hen.

“We counted on our local people very much,” said Smith, who owns the Red Hen with Jim Meridis. “We had 80 per cent repeat business. Some of them were like family. We miss them.”

A fire that started in early in the morning on June 25 has gutted the back end of the downtown building that housed the Old Red Hen and five apartments above it.

Smith said she’s grateful the tenants were unharmed in the fire.

“That’s the main thing, everybody from upstairs is safe,” she said.

Nobody has been allowed back into the building yet, and Smith said there’s been some structural damage so engineers are analyzing the damage.

“Looking in the front door, the smoke damage is right through to the front window,” said Smith.

The fire started in the back of the building and did the most damage to the kitchen and prep room.

But for some of the items in the front of the historic diner, which opened 75 years ago, the smoke damage might as well have been fire damage.

Tables and chairs made of wood are likely unsalvageable.

Similarly, a large collection of vintage and antique radios may be lost because of the porous panels of wood on the exterior.

What started as a few radios on a shelf for 20 years became a unique, community-supplied collection. The antique radios were nearly all brought in by customers who didn’t know where else to bring an old radio they had inherited or one they didn’t have room for anymore.

“Ten years ago, a gentleman brought in seven old radios,” said Smith. “They’ve been quite a centrepiece for conversation.”

Smith is hoping the photos that covered seemingly every inch of the walls might be restored.

There was a wall of Collingwood Shipyards history, another dedicated to the restaurant's original owners – Smith and Meridis have owned it for 20 of its 75 years – another collage of photos from the ski hills in the 1950s, and more photos scattered around the restaurant of local celebrities and public figures. Canadian Idol finalist Drew Wright, former fire chiefs, former mayors - many featuring the grin and mug of Meridis alongside them.

The bar stools at the front counter were from the original restaurant from decades ago.

Smith said she’s waiting to see if they can be restored.

“My memorabilia … it’s who we are,” she said. “Every nook and cranny has some type of history in there.”

The restaurant was also displaying seven original paintings by artist John Haines. Smith said if they are damaged, Haines is confident he can bring them back to life.

“It’s a waiting game to see what our future is, we’re kind of in the dark at this point,” said Smith. “We hope to reopen in the same location, there’s just a lack of information right now. We’re not going anywhere. We’re very positive we’d like to stay.”

The restaurant’s owners are waiting on the engineer’s report so they have a more clear picture of just how long the repairs will take and what work needs to be done.

“I’m more worried about the community, they’ve been very supportive to us,” said Smith.

In fact, she’s made sure to organize a plan for her customers to use up gift certificates they may have received for Christmas even though the Olde Red Hen is closed for the foreseeable future.

Georgian Family Restaurant on Hume Street has offered to accept Red Hen gift certificates for food there. Smith said she’s happy they obliged her request to take care of her customers for now.

“I wish I could reach out to [my customers] and say hi,” she said. “It’s like a community hug we have. We’re going to miss them in the interim but hopefully we’ll be back.”

Late-June seems to have brought bad luck more than once for the Olde Red Hen. On June 23, 2018, the restaurant’s Facebook blew up with angry and negative reviews and comments. After some sleuthing, Smith and her staff discovered the commenters were all Americans angry at another Red Hen restaurant in Lexington, Virginia after it refused service to Sarah Huckabee Sanders, the White House press secretary at the time.

The fire, however, has proven much more devastating and with some more permanent consequences.

While there isn’t much anyone can do to help right now, Smith hopes anyone who is walking by, and sees her and Meridis inside the restaurant in the next while, stops and says hi.

She asked to include her email so those who want to reach out can do so. She’s eager to hear from her Red Hen family. You can email her at dmsmith5800@gmail.com.

This is not the Red Hen you're looking for
Jun 25, 2018 4:02 PM
Comments
We welcome your feedback and encourage you to share your thoughts. We ask that you be respectful of others and their points of view, refrain from personal attacks and stay on topic. To learn about our commenting policies and how we moderate, please read our Community Guidelines.