Final exams and film premiers: you could call these guys overachievers

A group of four high school student have used their spare time this semester to make a feature-length film, which premieres at the end of this month, once they've finished their final exams.
Jun 23, 2018 8:56 AM By: Erika Engel 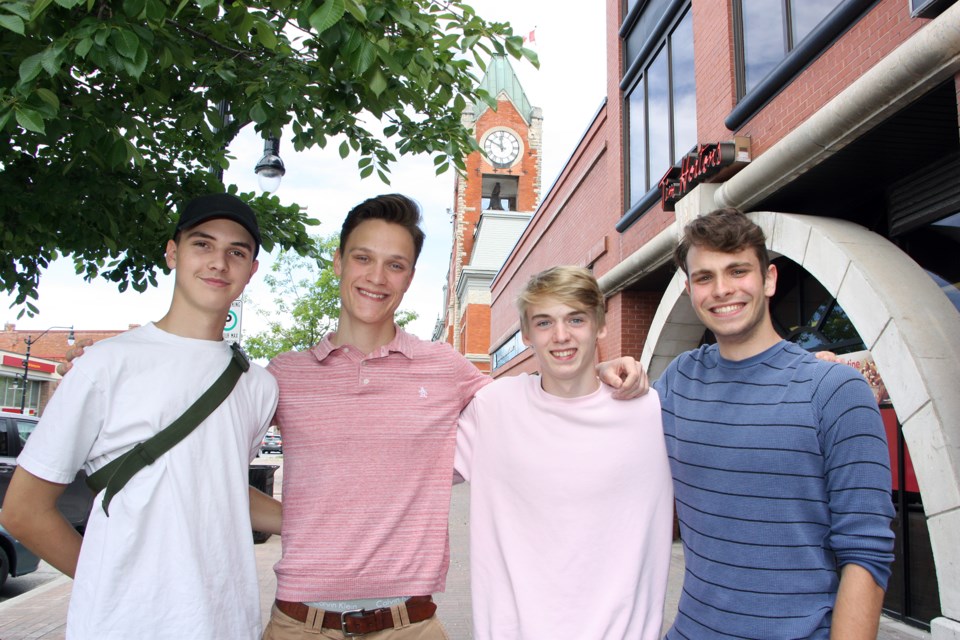 These four friends â Kaiden Collver, Zane Frantzen, Benjamin Kent and John Cardillo Jr. â are the creators of a new feature-length film called Senior Year, premiering at the Gayety Theatre at the end of the month. Erika Engel/CollingwoodToday

The local teenage filmmaking team of Zane Frantzen and John Cardillo Jr. have gone bigger than ever this year, and they had a lot of help.

After spending a collective 24-hours at Starbucks developing the outline for a script, the two high school friends decided it was time to assemble a team and create a feature-length film in less than five months.

The film is called Senior Year. The story follows Cole, a Grade 12 student who starts his final year of high school, loses his only friend and ends up feeling as though he wasted his high school career. He embarks on a mission for popularity but finds the solution to his emptiness is not outside of himself, but within.

“It shows the audience they don’t have to be stuck in a box,” said Frantzen. “You can make changes to be happier.”

He makes his way into a new group of friends who bring him along on a series of adventures where Cole learns to be himself and find friends who aren’t afraid to be odd and authentic.

“It’s a story a lot of high school students can relate to,” said Cardillo.

Between the two, Frantzen and Cardillo already had the co-director, co-producer and co-writer chairs filled. So they turned to their friend network.

Kent performed a supporting role in the film and was jokingly referred to as the Creative Ideas Consultant. Officially, he consulted on the script, adding jokes to help the story along.

“At first, there wasn’t a whole lot of whimsy [in the script],” said Kent. “The quality that makes people smile.”

Kent added his ideas and filled in as actor behind the funny friend Chad. Kent said he improvised most of his on-camera work, but it came natural since Chad is based on Kent.

“Ben’s added a really nice flavour to the film,” said Cardillo. “He’s genuinely one of the funniest people I’ve met.”

With the script and vision cast, the next challenge was putting it all into focus. That’s where Kaiden Collver, the cinematographer comes in.

Collver is an accomplished photographer, having both a natural knack for composition and the benefit of a professional mentor on an international internship.

Collver said he applied what he knew about photography to filming and learned along the way.

According to Frantzen, this student-driven film will be full-length (1.5 hours), and feature 31 scenes from 88 pages of script (not including the improvisation added in later. The scenes were filmed around Simcoe County and in Muskoka, thanks to many parents who volunteered their homes and properties for the creative process.

“It’s a testimony to the talent of the area,” said Cardillo. “It’s great to be able to show that off. We hope this will start a push toward more student-driven programs.”

“We were able to use everyone’s skills and strengths, because we drew from such a large group,” said Frantzen. “I think people will be surprised it was created by high school students. We feel very confident with the production we’re going to put out.”

And speaking of skills, the team of four filmmakers have many of their own, including the ability to make a feature-length film in under five months while still attending high school.

Frantzen is the oldest in the group and graduated high school last week. He’s earned a rare scholarship to University of BC for Computer Engineering. That’s in addition to his accomplishments as a musician and vocalist, an award winning scientific innovator, and his past filmmaking projects, which he calls his passion projects.

Last year, Cardillo delivered an award winning speech on the effects of domestic abuse on children, a topic he said is close to his heart. He toured Ontario with the speech and was invited by the local women and children’s shelter – My Friend’s House – to deliver his message at one of their events.

“It was eye-opening to see the effect my words had on the crowd,” said Cardillo.

Since he’s always been inspired by live performance and production, he said his transition to filmmaking has been exciting, and he wants to continue to pursue a career in filmmaking after high school.

For Kent, this project has ignited further his love of storytelling. He wants to publish “a few books,” after high school, then work toward a career in writing for film and television, but he plans to keep the projects small.

Collver remains passionate about photography, in particular, using his images – still or moving – to tell a story. He said he is intrigued by photojournalism and is considering that as his career path.

“We all want to make the product so good,” said Cardillo. “Our passion for it really comes out.”

The boys are donating the proceeds from the film to My Friend’s House.