'We continue to work with Barrie police on options, but fencing or barricading Meridian is not seen as an effective solution,' says Lehman
Apr 19, 2021 5:30 PM By: Bob Bruton 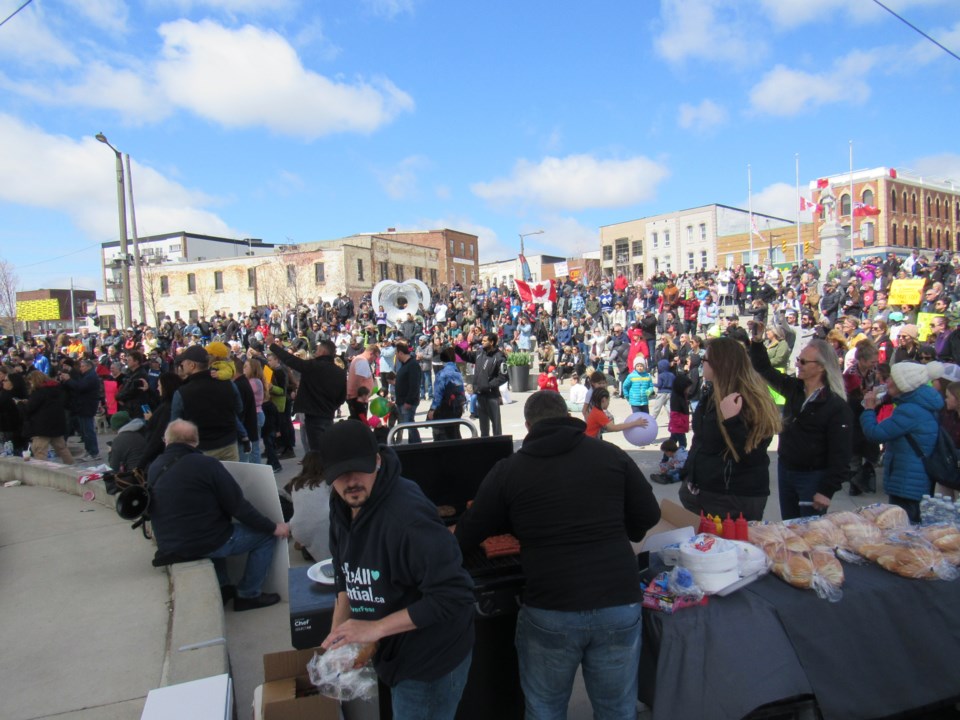 Hundreds of people were on hand for Saturday's 'freedom rally' at Meridian Place in downtown Barrie. Shawn Gibson/BarrieToday

Meridian Place won’t be fenced in to keep lockdown protesters out of the downtown Barrie space.

As part of its update to new provincial stay-at-home orders, the city released the following statement Friday: "All City of Barrie municipal playground equipment, waterfront fitness equipment... skateboard parks, tennis courts, basketball courts and picnic areas/pavilions will be closed to public access. Meridian Place in downtown Barrie will also be closed to the public. Signage will be installed as soon as possible."

Eight people at the event were ticketed for breaching public health restrictions, despite several warnings from police there would be fines and Barrie politicians asking people to stay away as COVID-19 case numbers continue to rise.

The Provincial Offence notices were issued by city police, by authority of the Reopening Ontario Act and the Emergency Management and Civil Protection Act, and range from $750 to $880.

City police said all eight tickets went to event organizers and those attending the rally.

Barrie police handed out the rally’s first ticket at the April 10 event at Meridian Place. In a video posted to social media, organizer Tyler Nicholson confirmed he received an $880 fine.

The rallies have been taking place since March 15.

— With files by Shawn Gibson

About the Author: Bob Bruton

ONTARIO: ICU survivors at higher risk of suicide, research finds
May 8, 2021 9:25 AM
Comments