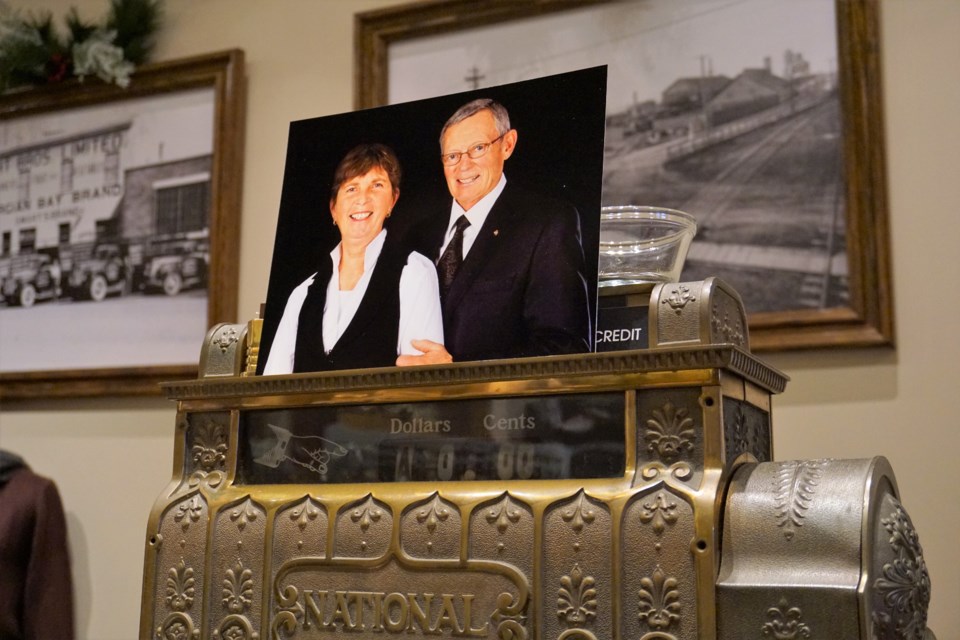 A photo of the late Ed Christie and his late wife Diane sits atop the cash register at Christie's on Monday. Christie died on Nov. 30. He was 79. Jessica Owen/CollingwoodToday

A photo of Ed Christie and his wife Diane sat atop the cash register of Christie’s on Hurontario Street on Monday, a solemn memorial to the well-known local businessman and councillor.

Local well-wishers, friends of Christie and family members came and went throughout the day to the local establishment to share stories of Ed and the impact he had on their lives and on Collingwood, as Christie’s Clothing has been a mainstay of Collingwood’s main street for generations.

“He was a very generous, loving person that loved the area he lived in and the business community he was part of,” said Christie’s son, Michael on Monday. “He felt like his personal success came through the success of his peers.”

Ed’s uncle, Henry Smart, was a tailor in Collingwood prior to the family purchasing the business.

“My dad has always been a part of it. He’s always enjoyed clothes. He enjoyed looking positive. When he was getting out of the corporate world and looked for a new career, he wanted to come back to town and the real truth is it was available to buy,” said Michael, with a laugh.

“As a family business, his philosophy was always to provide excellent service and excellent product at a fair price,” he added. “He never wanted to be the cheapest. It had more to do with the quality.”

When Ed came back to Collingwood in 1976, outside of Christie’s was a concrete sidewalk with asphalt thatches in it.

“When they started to look at redoing the main street, he got together with a bunch of other merchants to start the BIA, and that’s how we ended up with the nice streetscape we had at the time,” said Michael. “It’s why Collingwood is one of the few surviving downtowns that has the original main street in it.”

In 1993, Michael came home to help work in the store. At the same time, Ed had political aspirations on his mind.

“Dad came and asked me if I wanted to work, because he wanted to do this,” said Michael. “He thought it was a great opportunity for him to give back to the community. He was very passionate about the heritage of the town and wanted to see it designated as a heritage district.”

“He thought, if he were on council, it would be easier to push from the inside,” he added.

“He was one of those rare people who you could have a disagreement with, but when the decision was made, he moved on and you could still be friends. He never took anything personally,” said Michael.

Michael remembers heritage being a passion of Ed’s, which is what led to him also serving on the heritage committee.

“There isn’t a spot you could look at in this building that doesn’t have his fingerprint on it. All the woodwork – everything – was done and planned by him. And he built it to last,” said Michael.

Always a Clearview resident, Michael said his father was regularly torn between the two municipalities.

“(Collingwood) was his business home, and Clearview was his home home,” said Michael. “He always enjoyed politics. He would have stayed on council longer than he did.”

Once Ed became more involved in politics, Michael said he started distancing himself bit by bit from the business, handing more of the business over to Michael and his sister Dana. The two siblings have been running the business for the past 15 years.

“At the end of it, he would joke that he was the sales clerk and the garbage man,” said Michael.

Michael said his mother Diane’s funeral was one year to the day prior to Ed’s death.

“I hope people think of him as a man who was genuine, who cared about everybody, and really cared about the community,” said Michael. “He was willing to go to bat for something he believed in, and he always felt it was for the betterment of the community.”

The flags are flying at half-mast in Collingwood and Clearview this week.

Christie was elected Ward 1 councillor in Clearview Township in 2018.

“It is with deep sadness that I learned of Ed’s passing,” said Clearview Mayor Doug Measures on Monday in a press release. “He was a gentleman and a dedicated councillor to Clearview Township. His business experience and great interest in our community growth was an asset to our council. He will be missed at our council table and I will fondly remember our many debates and talks about Clearview.”

Funeral service will be held at 11 a.m. on Dec. 5 at Trinity United Church, with reception to follow. In lieu of flowers, donations to the Blue Mountain Snowdrifters Snowmobile Club would be appreciated by the family to continue on the bridge work that Ed was involved with.

344 new COVID-19 cases and 375 new recoveries reported in Ontario today
Jun 5, 2020 10:48 AM
Comments
We welcome your feedback and encourage you to share your thoughts. We ask that you be respectful of others and their points of view, refrain from personal attacks and stay on topic. To learn about our commenting policies and how we moderate, please read our Community Guidelines.