'What we’ve been encouraging applicants to do is … more front end work,' said Collingwood's planning director, Adam Farr
Oct 24, 2020 8:00 AM By: Erika Engel 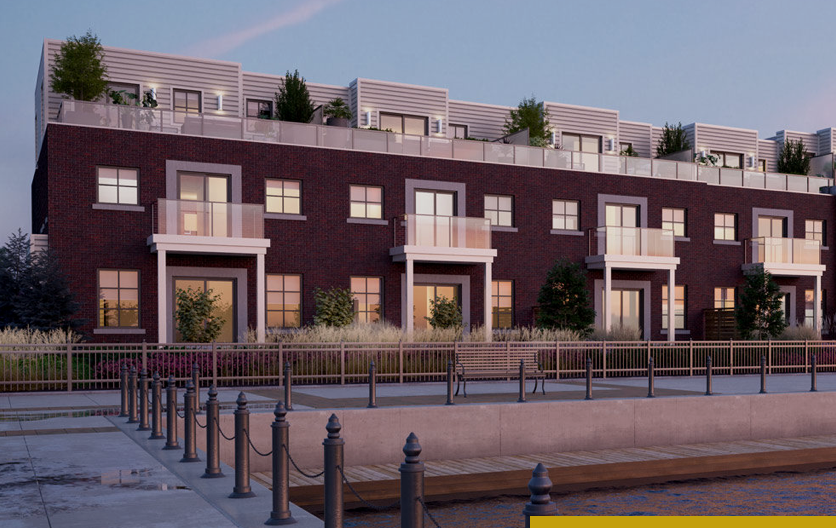 This rendering was included in a developer application to council to show townhouses proposed for Side Launch 2 development along the edge of Collingwood Harbour. The project is currently under construction. Screen capture

With more and complex development applications headed their way, Collingwood town staff are putting new practices in place to make sure proposals are more detailed by the time they reach council and the public.

Planning Director Adam Farr told council members staff are using informal conversations and the pre-consultation phase of the development application process to encourage developers to attach more studies and design aspects to their applications early on.

“We spend more time in the early stages … with the proponents to try to get better-quality applications,” said Farr. “By getting a better idea of what is proposed before an application enters pre-consultation, we can be more clear with the development proponents about the town’s expectations and ideally move through the planning process more quickly and smoothly.”

It’s a response born out of necessity. Emerging trends in Collingwood’s development applications and proposals have led staff to come up with ways of responding in a more streamlined and efficient way.

Farr said the proposals range from three to six storeys, with four-storey plans being the most common.

Town staff also have noticed a trend for developing the west end of Collingwood, where concerns like the Silver Creek Wetland area mean “significant environmental reviews” are required as part of the application process.

Other trends Farr and town staff have noticed is applications for infill developments and for subdivisions. Both present similar concerns from council and the public around urban design.

identity,” said Farr. “Staff have been raising the profile of urban design … this is resulting in some improvements of the quality of proposals that we’re seeing.”

In response to the trends and current developments in Collingwood, Farr said town staff are taking a more coordinated approach with multiple departments, agencies, consultants and proponents meeting to discuss planned applications.

“There’s quite a bit of development on the books that is coming to fruition now, along with more recently applied-for development, and a significant uptick in new development proposals,” said Farr. “The staff response to this kind of wave of development that has emerged in Collingwood is multifold.”

One of the changes being implemented by town staff is to push developers to provide more for zoning bylaw amendment applications. Some such applications, which include public meetings, drew criticisms from both council and the public because of lack of detailed plans. Those details were usually saved for the future site plan stage.

“But some of those details are fundamental to the zoning framework, so what we’ve been encouraging applicants to do is … more front end work,” said Farr.

Staff are using urban design terms of reference, and asking for those urban design and architectural matters to be addressed more thoroughly upfront.

Farr said the change was made at a staff level so that council and the public can better understand “how their issues of concern, and what they want to see as an output of these projects, is captured when approvals are considered.”

“It’s a shift for Collingwood, and we’re seeing developers step up and come forward with more detailed urban design documents in the early stages of reviewing draft plans,” said Farr, noting council would see the effects of this with upcoming application reviews. “We’re trying to find a common path forward … and trying to bring back better projects for your consideration.

Farr’s report, originally presented to the development and operations committee, is included on the Oct. 26 council meeting agenda, for endorsement by council.

Members of the public can watch the council meeting live on YouTube. The meeting begins at 5 p.m.

OPP removes 'unsafe' trailer from roadway in Wasaga Beach
Nov 26, 2020 2:40 PM
Comments
We welcome your feedback and encourage you to share your thoughts. We ask that you be respectful of others and their points of view, refrain from personal attacks and stay on topic. To learn about our commenting policies and how we moderate, please read our Community Guidelines.