While current rules allow you to set off fireworks 21 days per year, a bylaw change ordered by council would limit that to two days only from dusk to 11 p.m.
Jul 20, 2020 8:33 PM By: Erika Engel 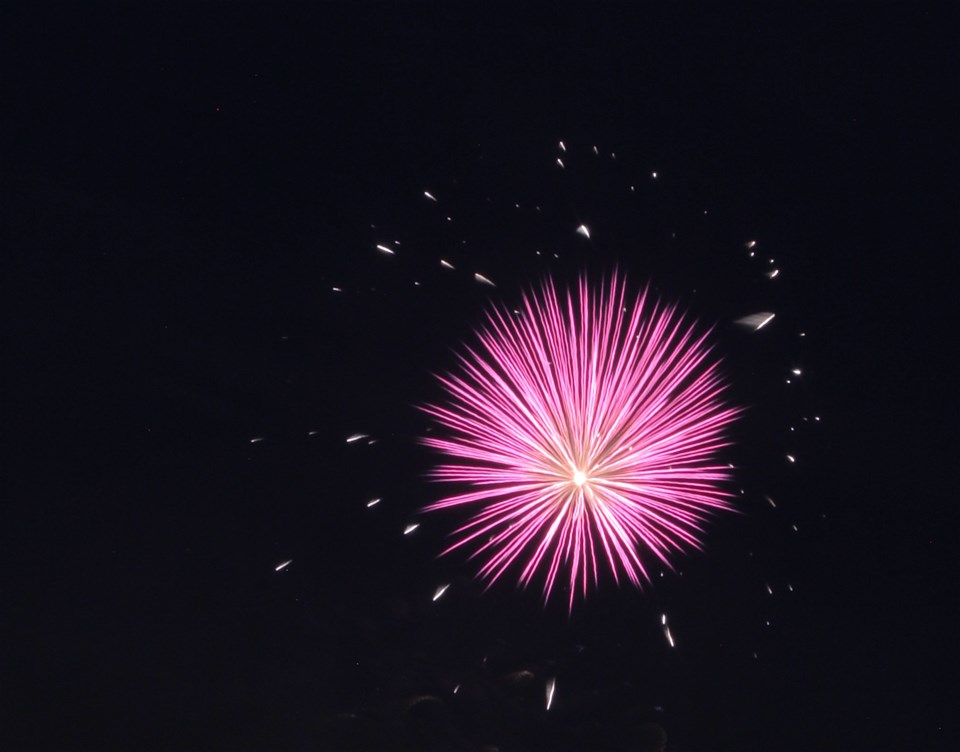 Collingwood council is changing the rules for backyard fireworks.

The municipality’s elected officials have decided to limit consumer fireworks to two days a year, and only between dusk and 11 p.m.

The current bylaw allows fireworks 21 days per year, including the three days before and after Victoria Day, Canada Day, and New Years’ Eve from dusk to 11 p.m. Professional fireworks displays (like Canada Day over Collingwood Harbour in non-COVID years) go through a permitting process and are not limited to those 21 days.

Under the yet-to-be-finalized bylaw, consumer fireworks would only be allowed between dusk and 11 p.m. on Victoria Day and Canada Day.

“Probably [the current] bylaw made sense going back to the old days,” noted Berman, who said he remembers times when everyone brought their fireworks to one house and lit them off together starting with the small sparklers and ending with the big one – the Burning School House.

“It was one night and you celebrated it like that,” said Berman. “It comes from a time when – I daresay – we respected each other more.”

He said he and others have noticed one-off firework displays at sporadic times of day and not necessarily adjacent to holidays.

Berman said he goes to the vet for “tranquillizers” for his dog, and noted his vet told him it was a trend around fireworks holidays.

“It has an effect, not just on animals,” said Berman, whose motion also refers to negative effects of fireworks on people suffering from post-traumatic stress disorder.

He wants to see more control.

Fire Chief Ross Parr said he fully supported the change to the bylaw.

“This has been an issue … since the invention of flying lanterns,” said Parr. “It’s very hard for us to keep a handle on it.”

For the fire chief, the removal of New Years’ Eve as an allowable time for backyard fireworks is essential.

He noted the fire department received the most calls about fireworks on New Years’ Eve, and they come in all through the night and into the next morning up to 7 a.m.

“It was causing us a lot of problems,” said Parr.

Councillor Mariane McLeod said she was supportive of the change to the bylaw but feared it was asking the impossible.

“My concern is that we’re putting in a bylaw that cannot be enforced,” she said.

Chief Parr said the fire department already struggles to enforce the existing fireworks bylaw because it’s hard to track down the location and person who set the fireworks off in the first place.

Councillor Kathy Jeffery said the bylaw needed to be changed to set a standard.

“The only way for people to take it seriously is through a bylaw and through some potential for enforcement,” she said. “I think this one makes a lot of sense.”

She noted there were similar discussions around the council table when they passed a no smoking bylaw for town parks.

“I think, over time, we have educated and changed behaviours,” she said.

Acting CAO Sonya Skinner said it’s important for town council and staff to “think hard” about bylaws when they come in.

“This is the complexity of setting something out in a regulatory fashion as opposed to a guideline or suggestions,” she said. “In some cases having the rule in place is importance guidance to the community, and in other cases you need to be able to fully enforce it.”

She added it would be ideal to always have the resources to proactively enforce every bylaw, but that wasn’t the reality.

“It really depends on whether council believes this to be an important factor for Collingwood,” she said. “Is this changing the livability in a way you think would be positive for the community?”

Council voted unanimously in support of the proposed changes, and staff will bring forward the updated bylaw at a later date. Mayor Brian Saunderson did not attend the meeting this evening (July 20) and so did not vote on the fireworks bylaw changes.

Exemptions to the bylaw will be left to a permit approval process through the fire department.

WATCH: Mental health services for children and youth gets $24.3M boost from province
Oct 21, 2020 12:30 PM
Comments
We welcome your feedback and encourage you to share your thoughts. We ask that you be respectful of others and their points of view, refrain from personal attacks and stay on topic. To learn about our commenting policies and how we moderate, please read our Community Guidelines.