Collingwood might have scored big, thanks to Barrie Colts 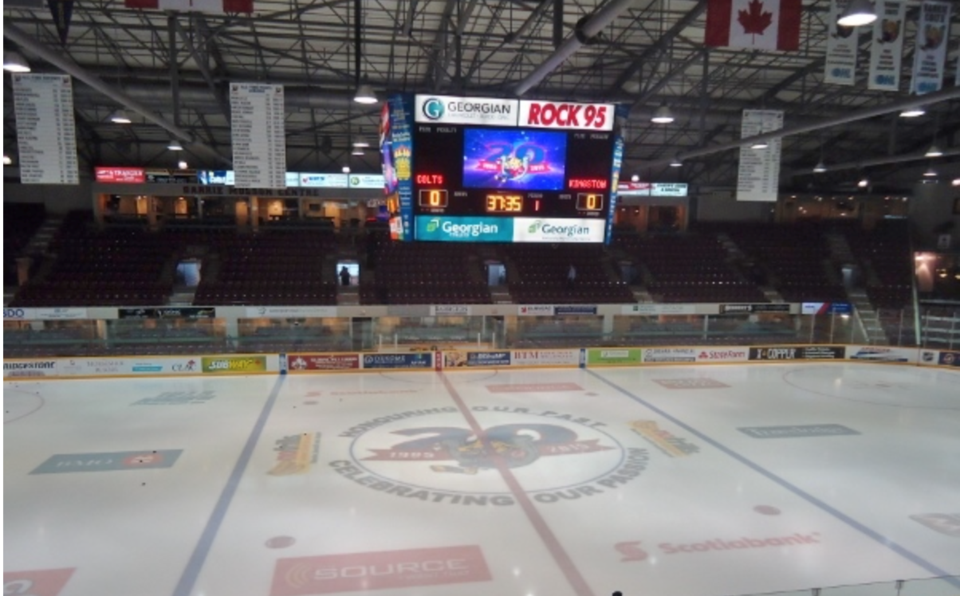 An image of the Barrie Colts scoreboard in the Barrie Molson Centre, which may be coming to Collingwood this summer. Photo from Dean Collver's staff report.

According to Dean Collver, director of Parks, Recreation and Culture, the deal “dropped in out of nowhere.”

Collver said the Barrie Colts reached out to Collingwood staff with a score clock for sale, saying they heard the town was looking.

Indeed, Collingwood staff have noted a need to replace the current score clock – installed in 1993 – and were recommending the purchase of a wall clock in 2019. Though that’s a downgrade from the current system (a centre ice clock hanging from the ceiling), it was significantly more affordable for an arena that doesn’t currently have a Canadian Minor Hockey Association team.

The Colts have offered their ten-year-old clock to the town of Collingwood for $60,000. Town staff estimate the installation costs would be about $20,000 on top of that, based on a quote received by the Colts to remove the clock from the Barrie Molson Centre.

According to Collver’s report, presented to the Corporate and Community Services Standing Committee May 7, the Colts’ clock was installed in 2008 and cost $450,000. It features LED fixtures and 8mm LED screens for video presentation. Collver noted there are “significantly more opportunities to advertise on the Colts clock” compared to the one currently hanging at the Eddie Bush arena.

The current clock uses incandescent lighting and staff is having a hard time finding replacement parts, according to Collver.

Before the deal is finalized, staff are consulting with engineers to make sure the structure can handle the new 9,000-pound score clock. The current one weighs 1,000 pounds.

Pending the engineer’s report, the new clock would be installed this summer. Collver thinks it could be in the Eddie Bush arena by July since the Colts need to get their new system installed and operational before their season starts.

The standing committee approved the purchase, with funds coming from the working capital reserve for now. Collver said if there is a minor hockey team in the Eddie Bush arena soon, there will still be an opportunity for the town to work with them on a contribution toward the new scoreboard.

The report will be included as part of the standing committee minutes to council at its meeting May 14.

BEYOND LOCAL: What's in store for online video watching on cellular networks?
Jan 27, 2020 8:55 PM
Comments
We welcome your feedback and encourage you to share your thoughts on this story. We ask that you be respectful of others and their points of view, refrain from personal attacks and stay on topic. To learn about our commenting policies and how we moderate, please read our Community Guidelines.