After a year-long hiatus, the Rondo Ensemble started up again in March 2021 to accolades from Barrie Music Festival
May 12, 2021 8:00 AM By: Jessica Owen 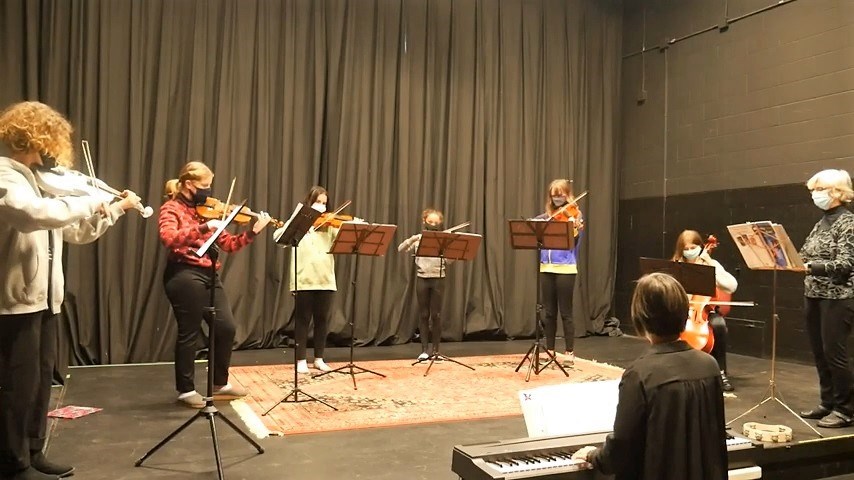 The Rondo Ensemble rehearsed at the Simcoe Street Theatre in March 2021, which allowed for social distancing between the less than 10 members.Contributed image

After nearly a year apart, a local musical ensemble re-assembled for a couple of rehearsals, and were stunned to gain regional recognition for the outcome.

The Rondo Ensemble, a youth music ensemble based out of Collingwood, recently received word they had received five gold awards through the 2021 Barrie Music Festival.

“It was a big surprise! We didn’t expect it. We were overjoyed,” said Keiko Yoden-Kuepfer, musical director with the ensemble, adding how grateful she is to the Barrie Music Festival, as well as community members and parents who have been supportive.

The award winners are as follows:

The name Rondo comes from the musical phrase meaning “return.”

“We include students who have graduated to participate when they come home. We welcome them to perform with us,” said Yoden-Kuepfer.

Youth who participate come together from a variety of different school backgrounds. Some are home-schooled, or attend the private or public school system.

The Rondo Ensemble managed to get only a handful of practices in before being forced to take a hiatus in March 2020 after the pandemic struck.

“We practised in March twice, and then closed,” said Yoden-Kuepfer, with a laugh.

While instrumental coach Susan Connolly did meet with some individual students one-on-one throughout the pandemic, they didn’t meet as a group again until March 2021.

The group met at the Simcoe Street Theatre to record a socially distanced session, and decided to submit video of their rehearsal to the 2021 Barrie Music Festival for fun.

“We didn’t meet for a year. We just wanted to make a fun memory for the kids. We weren’t thinking about competing,” she said.

When Yoden-Kuepfer found out at the end of April that the ensemble had won five gold awards through the festival, she said she was stunned.

Currently, the Rondo Ensemble is rehearsing via Zoom, which Yoden-Kuepfer said can bring its own challenges.

“At least we’re still together,” she said. “We are hoping by the summertime we can meet outside. We’d like to visit nursing homes or hospitals to share the joy of music with people.”

The Rondo Ensemble can be reached via Facebook here.