A plan by the local conservation authority suggests we need to be prepared for extreme weather to be more commonplace.
Feb 6, 2019 3:00 PM By: Erika Engel 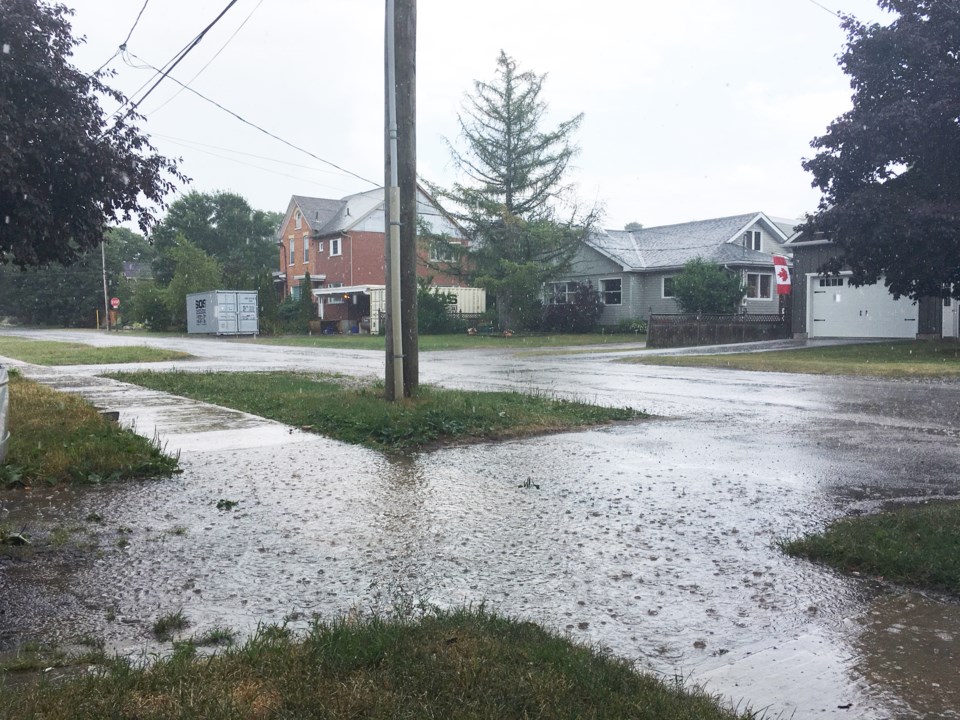 The Nottawasaga Valley Conservation Authority said Collingwood is a high risk for significant damage during a flood event due to high population along the rivers and creeks. Erika Engel/CollingwoodToday

Climate change means the trend to hotter, drier summers and wet, warm winter and springs is going up in the Nottawasaga Valley area.

According to a Climate Change Strategy and Action plan by the Nottawasaga Valley Conservation Authority (NVCA), which includes Collingwood, temperatures in the region are climbing steadily, and predicted to continue on that upward trajectory, particularly in the winter months.

Stream temperatures are also increasing with a rise between 1.6 and 4.7 degrees Celsius predicted over the next century.

Rising stream temperatures can have an impact on cold and cool-water fisheries and macro-invertebrates, while also causing an increase in algae growth, which impacts water quality.

The NVCA report is one phase of many, and this one focused on research of past data to predict increases for the future.

Rainfall, while the increase may seem small, is showing a trend toward higher intensity, meaning more rain in shorter bursts, with an increased risk of flooding.

“This is of particular concern to NVCA as this increases the risk of loss of life and property due to storm-related flooding and erosion,” states the report.

“Changing temperature and precipitation regimes and the numerous outcomes that arise as a result – such as rising stream temperatures – are going to have major impacts to the environmental, physical, and socio-economic systems for the communities situated in the watershed,” states the report.

While the numbers included in the report are predictions, and therefore can’t be considered certain, the NVCA says uncertainty is no excuse for inaction.

The next phase of the plan will look at risks and impacts associated with climate change observable today and projected to come in future years.

“Recent extreme weather events such as flash flooding, heat waves, drought, and tornadoes illustrate the extent to which weather can impact daily life,” states the NVCA report. “They also emphasize the need to be prepared for changing weather regimes where such events are expected to be more commonplace.”

In Canada, climate change has meant more wildfires, and more unpredictable droughts, extreme heat events, extreme weather and storms, capable of dumping a month’s worth of rain in a matter of hours.

As Dr. Blair Feltmate, associate professor at the University of Waterloo and head of the Intact Centre on Climate Adaptation (ICCA), recently told the Lake Simcoe Region Conservation Authority’s Annual General Meeting: “The elephant in the room, from a climate change perspective, is… too much water in the wrong places.”

Combined with the loss of natural wetlands, ageing infrastructure, and unprepared homeowners, the result can be catastrophic – as measured in insurance payouts for property damage due to flooding.

From the 1980s to 2008, insurance companies could expect to pay out between $200 million and $500 million per year in damages, well below the revenues brought in by insurance premiums. Since 2009, the average annual payout has been closer to $1 billion, with losses exceeding premiums in eight out of the nine last years.

“Fifty-five per cent of these losses are due to water – flooding, and flooded basements,” Feltmate said.

It’s not just the financial cost. The rise in damages is “a metaphor for the risk that is in the system,” Feltmate said. A risk that could have increasingly negative impacts on homeowners, businesses and municipalities.

A growing number of homes are no longer able to get flood insurance because “they live in an area that’s been flooded repeatedly, or have made claims,” he said. Without flood insurance, the average $43,000 cost of a flooded basement falls on the homeowner or the municipality.

Another report by the NVCA titled Watershed Flood Risk Assessment noted Collingwood was most-at-risk for flooding within the NVCA boundaries. The risk is higher in Collingwood due to the number of buildings and roads within the floodplain compared to other communities.

“My primary interest is to de-risk Canada, relative to the impacts of climate change and extreme weather events" by finding ways to create flood-resilient communities, Feltmate said.“Climate change is real, and it is irreversible. It’s here to stay. We may slow down the rate of change, but we’re not going back."

The Intact Centre is working with the National Research Council of Canada, Standards Council of Canada and CSA Group to come up with new standards - “practical, cost-effective ways to mitigate flood risk.”

Information is available for individual homeowners, new greenfield development and subdivisions, and, just this past week, community retrofits. A set of standards for commercial businesses will be released later this year.

- With files from Miriam King