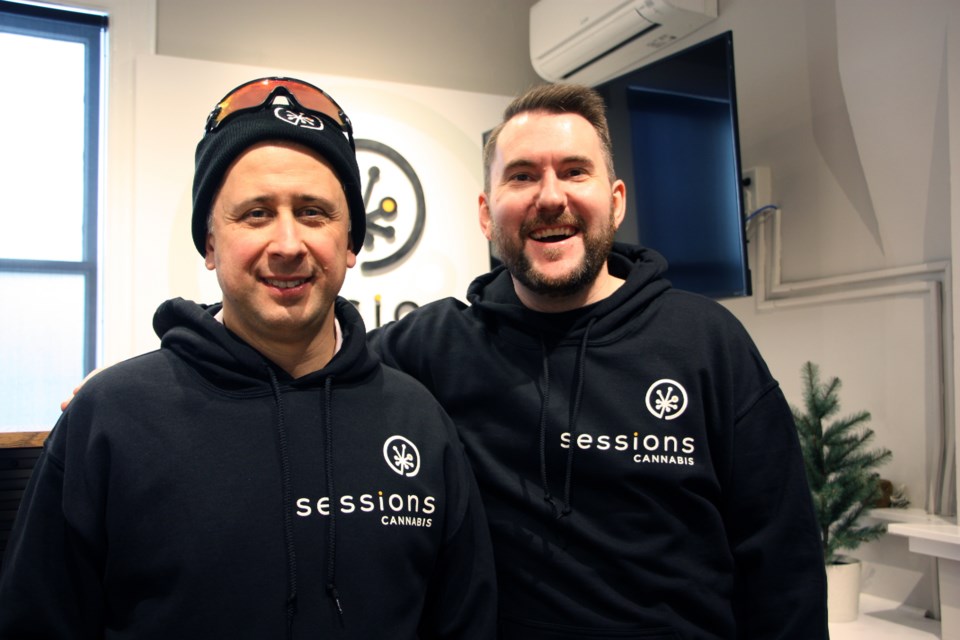 Louis Laskovsky, store owner, and Steven Fry, founder of the Sessions franchise, are happy to be opening the doors to Collingwoodâs first retail cannabis store on Dec. 20, 2019. Erika Engel/CollingwoodToday

Tomorrow you’ll be able to add cannabis to your grocery list.

Sessions officially opens to the public Saturday, Dec. 21 with an offering of flower, pre-rolled joints, oils, and accessories.

The store is owned by Louis Laskovsky, a lawyer from Richmond Hill, who tried unsuccessfuly for a retail licence in the first government lottery. He won in the second, and teamed up with Steven Fry, the founder of Sessions, which is a budding cannabis franchise.

Fry, who grew up in Barrie, was one of the first-round lottery winners and has applied what he learned in the early stage to create a franchise and help others navigate the government regulated retail industry.

Laskovsky said he’s excited to open the doors and has had a good response from the community so far.

“The community has been really accepting here,” said Laskvosky, adding his store received no formal objections during the licence application phase.

A launch event today saw attendees from town council and local meda among others fill up the heritage home space.

Laskovsky said he’s hired 12 staff for the store, adding there will be security checking ID to prevent minors from entering.

“There’s going to be a lot of people in here,” he said. “Education and service are going to be the focal point.”

The location on Hurontario Street was formerly a heritage home and most recently a hair salon, though it has been empty for more than two years.

Fry said the Collingwood Sessions location would be selling approximately 100 types of flower product and much of it will come from local producers, including Northern Green.

In January, when Ontario law permits, the store will also carry vape cartridges, topicals, and edibles.

There will be more Sessions cannabis stores opening in Ontario including locations in Cambridge, Waterloo and Hamilton. Fry said he hopes to open 15 stores in 2020.