The repairs will be coupled with a project to replace the boardwalk and gazebo extension into the west harbour thanks to an anonymous donation
0
Sep 10, 2019 11:00 AM By: Erika Engel 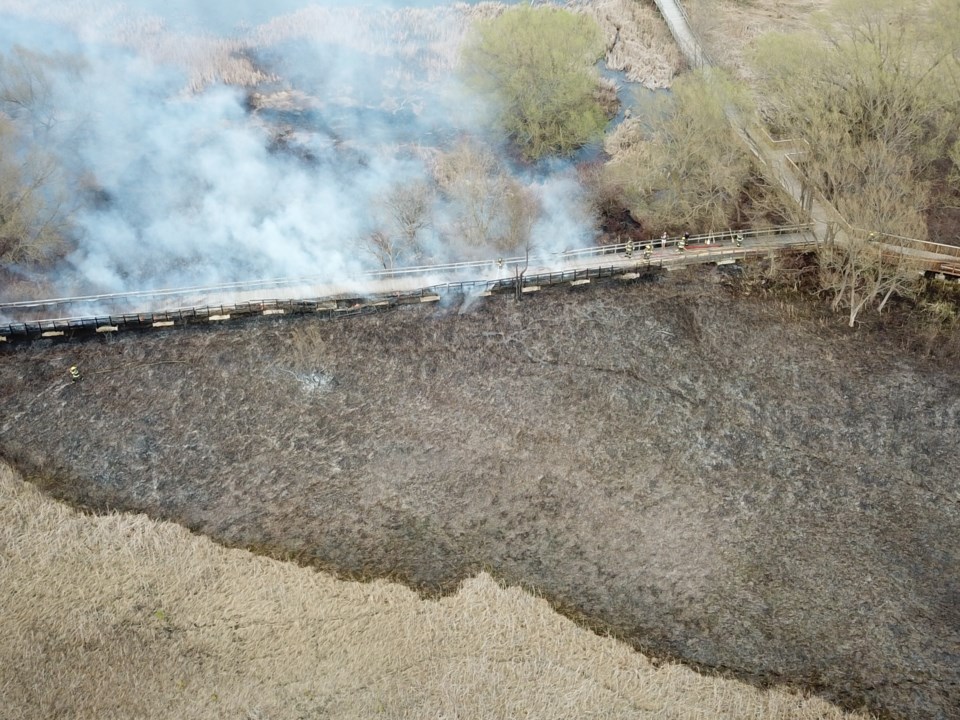 Deputy Fire Chief Dan Thurman said the fire started in the bullrushes and came across the field to the boardwalk. Stuart Snelgrove for Collingwood Today

A burned section of Collingwood’s boardwalk trail along the western shoreline will be rebuilt soon.

Dean Collver, director of parks, recreation, and culture, presented an update on the project during last night’s Corporate and Community Services Standing Committee.

“The insurance program took longer than we hoped,” said Collver. “I wish we could have turned around and replaced it right away.”

The boardwalk along the western shoreline of Harbourview Park burned in a fire on May 9, 2018. The fire was caused by a bonfire started in an adjacent field.

Since then, the trail has been closed.

The town’s insurance company is going to cover the cost of the repair - approximately $66,000.

However, while the trail was closed, an anonymous donor came forward offering $100,000 if the town would also replace the boardwalk and gazebo that extends into the west harbour off the boardwalk trail.

Due to the insurance money and the anonymous donation, the town would be spending approximately $73,000 of its own money on the project, but it would mean installing a gazebo originally envisioned in the Waterfront Master Plan for the area.

So town staff have been working to prepare for the full project of replacing the burned boardwalk and the extension and gazebo.

“We had to re-do structural drawings from scratch,” said Collver, noting the original boardwalk drawings were lost.

Council originally approved $150,000 for the project, leaving a savings of about $76,000 thanks to insurance money and the anonymous donation.

Collver recommended putting it toward a project for the Hens and Chickens trail, where a bridge was destroyed and the trail is partially washed out from high water levels.

The Trails Advisory Committee asked council earlier this year to consider setting aside extra money to have a new bridge engineered.

“The project requires a fulsome approach,” said Collver of the Hens and Chickens trail. “There’s not time to get it done in this budget year.”

Murray Knowles, co-chair of the Trails Advisory Committee asked if the money could be put toward the groundwork and engineering for the new bridge at Hens and Chickens this year so the project could be started early in the season next year.

Collver said that was staff’s intention and they had a budget for that sort of work.

As for the boardwalk and west harbour extension, Collver said he couldn’t commit to a timeline, but wanted to get it to tender as soon as possible.

The new gazebo will not have a roof and will be modified for accessibility. He’s hoping to have the boardwalk a little closer to the vegetation.

“The donor’s interest is in having this become a site for education on eco-systems and the environment,” said Collver.

The current high water levels, “are a factor in everything we’re doing,” said Collver, adding they will have to consider them again when building a new boardwalk.

Here's what's happening with the boardwalk trail closed due to fire
Aug 29, 2018 1:30 PM
Comments
We welcome your feedback and encourage you to share your thoughts on this story. We ask that you be respectful of others and their points of view, refrain from personal attacks and stay on topic. To learn about our commenting policies and how we moderate, please read our Community Guidelines.