Black Bellows Brewing Company is anticipated to be open by end of summer 2019; owner says opening date is ‘moving target’
Mar 20, 2019 11:30 AM By: Jessica Owen 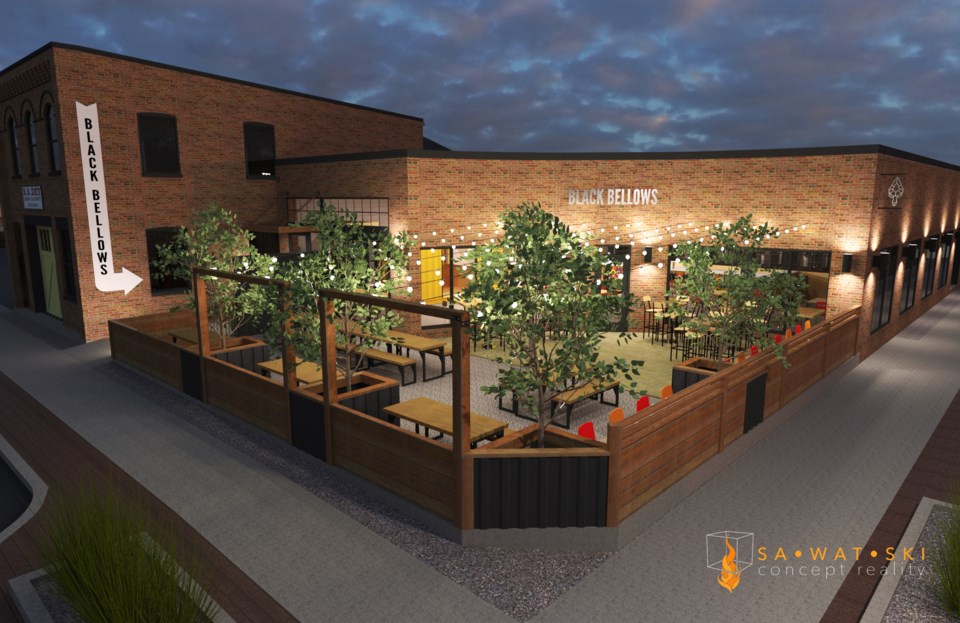 Committee attendees got a first look at the Black Bellows Brewing Company on Monday night.

Scott Brown and Bryn Davies from the under-construction brewpub came before the Development and Operations Services Standing Committee to talk about their vision for the former Dey’s Body Shop building at 40 Simcoe Street, which they say is planned to be open by the end of the summer.

“A lot of you may have seen the windows boarded up and some work trucks and wondered what exactly is going on, so we’ll try to shed some light on that today,” said Brown.

According to Brown, the brewpub will have a large selection of house-brewed beers, a gourmet beerhall menu, seating for up to 180 patrons including the patio and a private event space.

“We were very intrigued by the Dey’s Body Shop, as a lot of people are. It’s an architectural gem and one of the few remaining pieces of our industrial heritage downtown,” said Brown. “It always struck us as the perfect place to have a brewpub.”

Brown outlined how the name of the company and the logo is an homage to the Dey blacksmithing days, which is why the bellows is included in both.

“We were inspired by the Deys space. It’s been in the Deys family since the 1860s. It started out as a blacksmith shop,” said Brown. “We really wanted something that would capture the history of the building.”

The mission of the brewpub includes marrying the old with the new.

“Like the blacksmiths of the past and the makers and creators of today, we infuse the spirit of relentless invention into everything we do,” said Brown. “It’s why we embrace a no-rules approach to brewing. It’s why out brewpub will be a place where the old is transformed into the fantastically new.”

The brewing company started in 2014 as a contract brewery, which meant they were renting out spaces to brew the beer. Moving in at 40 Simcoe Street means the beer will now have its own home.

“We are hoping to open late summer, but that is a very quickly moving target,” said Brown, with a laugh. “We’re doing our best to stay on-track but there’s a lot of moving parts.”

Deputy Mayor Keith Hull asked the duo whether the enclosed area at the south side of the building will be used for parking.

“We will have some parking spots there,” said Davies. “The building’s actually getting extended behind, so there will be parking there.”

COVID-19: Office furniture shortages loom as Canadians stay home this fall
Sep 18, 2020 8:55 PM
Comments
We welcome your feedback and encourage you to share your thoughts. We ask that you be respectful of others and their points of view, refrain from personal attacks and stay on topic. To learn about our commenting policies and how we moderate, please read our Community Guidelines.