Collingwood residents share their story - and their family's legacy - as founders of the Sheffield Park Black History and Cultural Museum
Feb 10, 2020 4:00 PM By: Erika Engel 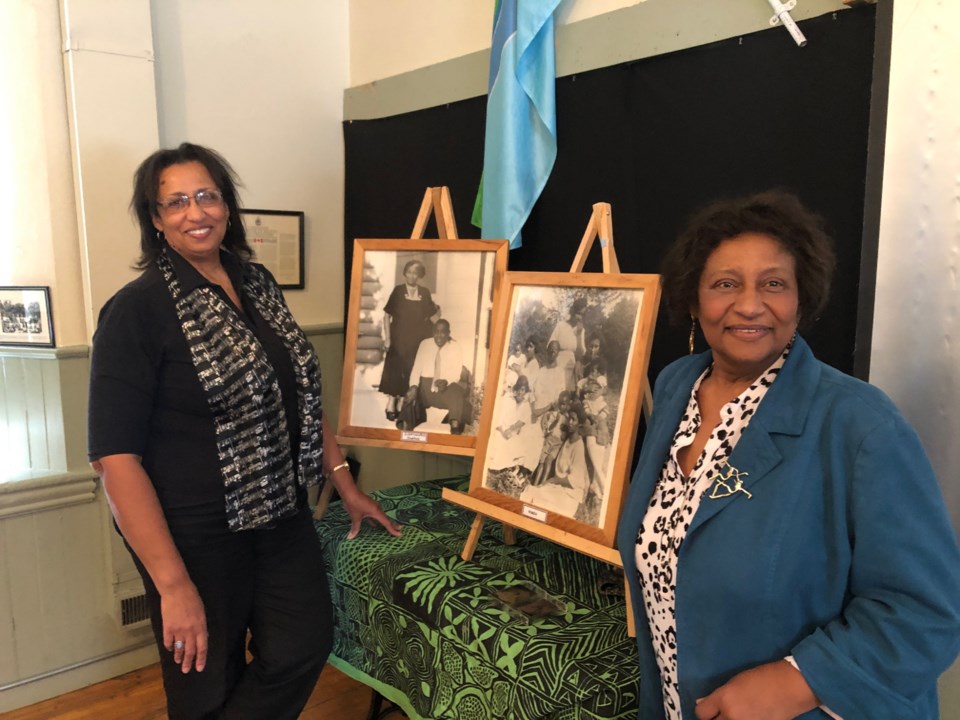 Sylvia and Carolynn Wilson are the owners and operators of Sheffield Park Black History and Cultural Museum. Erika Engel/CollingwoodToday

A few family photos etched on small rectangles of tin began a collection that would not only reflect black history and culture in the area but would also help preserve historical sites across the region.

The tin negatives belonged to Howard Sheffield, and they were the beginning of the Sheffield Park Black History and Cultural Museum, which is now located on Clark Street in Clarksburg.

It was Sheffield’s nieces, Carolynn and Sylvia Wilson, who were inspired by the photos, and their uncle’s passion for oral history and black pioneers to the area. Together the three created the museum

The Wilson sisters, who were born and raised in Collingwood as seventh-generation Canadians, are the owners and operators of the museum. Both Sylvia and Carolynn were the guest speakers at a Black History Month presentation at Craigleith Community Centre yesterday (Feb. 9), which was also the anniversary of their uncle's death

“Yes, we’re a museum located in Clarksburg, but that’s not all we do,” said Sylvia. “It’s not all we are. We spread the word, share history, and promote growth.”

The museum houses personal collections that tell stories from Africa to Canada. There are monuments to black pioneer families in the area, many of whom have donated their own personal items for the museum - which is now 16 buildings large.

There are dishes, uniforms, dresses, kitchen items, toys, and more from every corner of the world.

“What is at the museum is probably part of your history too,” said Sylvia. “It’s all of our homes and our grandparents’ homes. People share it with us ... it makes black history Canadian history.”

And speaking of Canadian history, Carolynn and Sylvia have also been called on to help save pieces of history in the region.

Through their family history and their museum collection, the sisters contributed documents and evidence to help preserve and restore a black pioneer cemetery in Priceville - where members of the Sheffield were buried.

They also helped with the effort to save the Oro African Methodist Episcopal church in Oro-Medonte. The church, said Carolynn, was one of the last standing log buildings erected by black Canadians in the 1840s.

The Wilson sisters also helped collect historic records and evidence for a Holland Township neighbourhood when the township took down a sign for Negro Creek Road and proposed a new name.

“We proved there was a well-established, vibrant settlement there in Holland Township,” said Carolynn. “The Negro Creek Road and Negro Lake were the last remaining landmarks, the cemetery had already been obliterated … What’s in a name? That’s all we had left.”

The museum and the work of the Wilson sisters is all about legacy.

Their grandparents Ildia and Wilfred Sheffield (Gran and Pop) worked together as cooks on Great Lakes ships. They saved their money and bought property in the Collingwood area.

The first, along Highway 26 where Admiral’s Gate condominiums now stand, was an inn and restaurant opened in the 1950s.

At Cedar Inn and Tourist Resort, you could get a multi-course meal for $2.50. It was frequented by black people travelling, because they knew it was a safe place to stay.

Sylvia said she didn’t know if her grandparents inn was in the "Green Book," but a postcard made with a photo of the inn declared it was an establishment “owned by a coloured man.”

When Highway 26 was built, the work destroyed the inn’s well, and the restaurant and inn closed permanently because of it in 1971.

Ildia and Wilfred had another property on the edge of Collingwood Township (Long Point Road) where they opened a tent and trailer park, which remained a busy place until a town-owned sewage outflow pipe destroyed the park’s water source.

They started work on the museum, which eventually moved to a new property in Clarksburg in 2008.

“This is what happened, but we rose above it,” said Sylvia.

Both she and her sister have shunned bitterness in favour of celebration.

The museum they own together has chains on display, but it also has the furniture from the Davenport family home, one of the area’s black pioneer families who were known for their carpentry business.

“It is rewarding to unite people and forge new friendships,” said Carolynn. “We’ve been able to speak to the issues, and highlight the successes.”

For Sylvia, the importance of black history is a recognition that it is Canadian history.

“It’s everybody’s history,” she said. “We are reaching beyond. The more you go out, the more community you’re going to find.”

Both Sylvia and Carolynn have been named as honourees for the 100 Accomplished Black Canadian Women - Carolynn in 2016 and Sylvia this year.

This year marks the Sheffield Park Black History and Cultural Museum’s 30th year in operation. The museum is open from May to October.

There are more Black History Month events planned in Collingwood with a visit from Dr. Jean Augustine, the first black female MP and cabinet minister in Canada, on Sunday, Feb. 16 from 2 p.m. to 4:30 p.m. at Heritage Community Church (310 Seventh Street).

Rita Shelton Deverell will also be at Heritage Community Church on Feb. 26, from 10 a.m. to 1 p.m. for a book signing. She is the author of American Refugees: Turning to Canada for Freedom.

Faces of Collingwood Veterans will be memorialized through BIA banner program
Aug 5, 2020 8:33 AM

Good morning, Collingwood!
Aug 5, 2020 6:00 AM
Comments
We welcome your feedback and encourage you to share your thoughts. We ask that you be respectful of others and their points of view, refrain from personal attacks and stay on topic. To learn about our commenting policies and how we moderate, please read our Community Guidelines.