BEYOND LOCAL: Could toxic bosses be the next to face #MeToo-type reprisals? 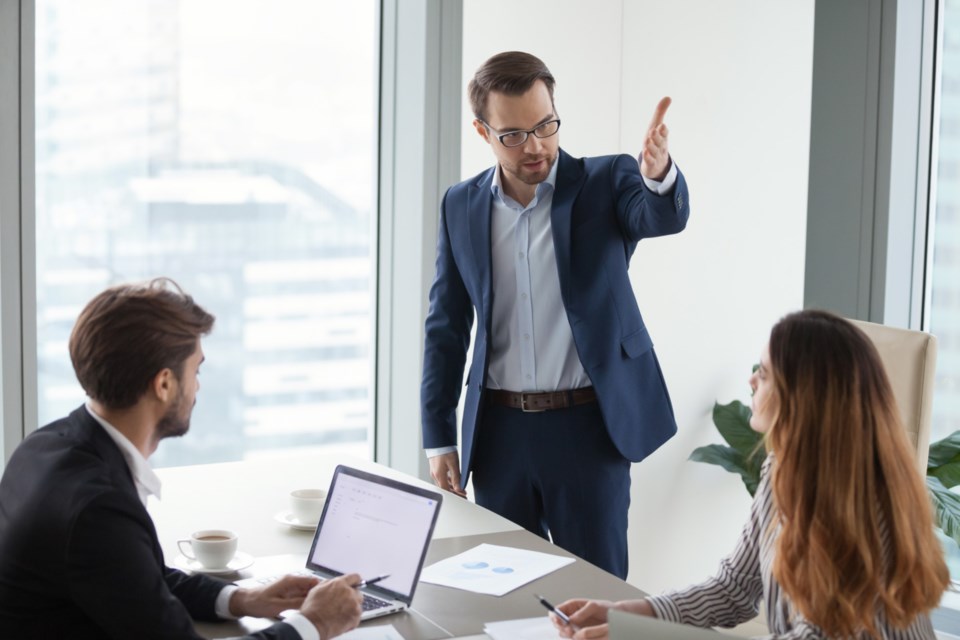 Many of us have had the misfortune of working in a toxic workplace. We’ve experienced demeaning comments from a supervisor, verbal aggression, surveillance and sometimes even physical threats or intimidation. But what if these behaviours were treated as seriously as other forms of workplace misconduct?

In Canada, the emphasis on workers’ right to a safe and healthy workplace in the wake of former governor general Julie Payette’s resignation provides a rare opportunity to expand the definition of workplace harassment and hold toxic bosses to account — just as serial sexual abusers have been outed and held responsible during the #MeToo movement.

This is an especially opportune time to do so, given many employees could soon be heading back to the office due to COVID-19 vaccination efforts.

Payette resigned in January after an independent investigation revealed widespread allegations of harassment at Rideau Hall. The investigation detailed reports of physical intimidation and public humiliation, leading some employees to take medical leave or resign.

While this environment certainly sounds toxic, the Policy on Harassment Prevention and Resolution provides strict standards to determine when toxic behaviour amounts to legal harassment. A “poisoned workplace environment” featuring hostile and offensive behaviours only qualifies as harassment if directed at one individual or is tied to a legal basis for discrimination, including race, gender and religion.

Following these guidelines, the independent report concluded that staffers’ allegations did not meet the formal definition of harassment, despite finding that many of the alleged behaviours could have led to a toxic workplace.

It’s striking then, that in response to Payette’s resignation, Dominic LeBlanc, the intergovernmental affairs minister who spoke on behalf of Prime Minister Justin Trudeau, stressed Canadians’ “right to work in a healthy, safe, harassment-free workplace.” In her resignation statement, even Payette herself emphasized workers’ “right to a healthy and safe work environment.”

The framing of toxic workplace behaviours as an occupational safety issue, one that could amount to harassment, recognizes the psychological trauma that these environments inflict. If you were required to work in a literal toxic workplace, filled with noxious gases, you would expect a gas mask. Workers who face daily dehumanizing and hostile treatment deserve similar guarantees of protection.

A quick look across the border reveals how the characterization of toxic behaviour can have significant consequences for accountability. The week Payette resigned, Minnesota Sen. Amy Klobuchar took centre stage at President Joe Biden’s inauguration, delivering opening remarks. There was no mention of the multiple investigative reports that Klobuchar has repeatedly engaged in abusive behaviour, including throwing binders and phones at her aides.

Perhaps most memorably, an allegation surfaced that Klobuchar publicly humiliated a staffer who forgot utensils for her salad, and demanded that the employee clean her comb after she used it as a makeshift fork.

Klobuchar did not deny these accounts, but insisted that she is “tough” and pushes people because she has “high expectations.”

Others have noted the parallels between these cases and dismissed the divergent consequences for Payette’s and Klobuchar’s political careers. The difference, one writer argued, is that the governor general “does not actually have any important work to do.”

Regardless, the impact on workers remains the same: fear, humiliation and sometimes trauma. Whether someone works for an abusive supervisor at a fast-food restaurant or in the hallowed halls of Parliament, that supervisor is still responsible for their behaviour. Abuse is still abuse, and no one deserves to feel unsafe and frightened at work.

The conversation around toxic workplace behaviour requires an awareness of ingrained cultural stereotypes that women in power are aggressive, while their male counterparts are assertive.

Women also appear to pay a higher price for toxic behaviour, while men are given the benefit of the doubt until other allegations emerge.

New York Gov. Andrew Cuomo has been accused of toxic leadership for years, for example, yet he is only facing public censure and an impeachment investigation following recent sexual harassment allegations.

Both Payette and Klobuchar are high-profile female leaders, and have likely been on the receiving end of gender stereotypes. But at the same time, given the scope and severity of the allegations against them, it’s clear these accounts cannot be attributed solely to bias. Confronting toxic behaviour without reinforcing misogyny will require acknowledgement and vigilance — a supervisor’s gender is no excuse to neglect workers’ well-being.

Toxic environments can breed and compound other forms of discriminatory harassment. Workers with intersecting identities often face multiple fronts of abuse at once.

In Canada, for example, a former Rideau Hall employee recently came forward with allegations of racism, highlighting the intensified mistreatment of employees of colour.

This summer, a British KPMG executive resigned after he told employees to “stop moaning” about pay cuts, while also labelling the concept of unconscious bias as “crap.”

If employers swiftly confront dehumanizing behaviour at its source, other forms of prohibited harassment will likely not be tolerated, emphasizing a culture of respect for all workers.

Toxic workplace behaviour must be categorized as its own form of harassment. Fortunately, since Payette’s resignation, the definition of workplace harassment for Canadian federal employees has been amended to include humiliation and psychological trauma in the workplace. Federal employers must also submit annual reports detailing harassment allegations.

While these are promising first steps, these regulations only apply to about 10 per cent of the Canadian workforce. For all workers to receive these protections, provinces must follow the federal government’s lead.

Researchers have found that employees experiencing managerial abuse have a propensity to mistreat their co-workers, creating a toxic ripple effect. Alternatively, if we raise the bar for workplace standards, especially for those at the very top, we all stand to benefit.