Hamilton has been an on-ice official in the OHL for nine years, including five as a referee
0
Nov 7, 2019 8:00 PM By: BarrieToday Staff 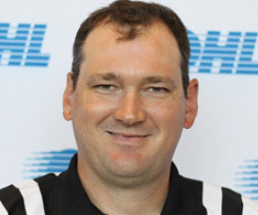 Barrie's Mike Hamilton has been named to the officiating team for the Canada-Russia series. Photo supplied

TORONTO - The Ontario Hockey League today announced the Officiating Team for Games 3 and 4 of the 2019 CIBC Canada Russia Series set for Thursday, Nov. 7 in Kitchener and Monday, Nov. 11 in London.

Referees named to work the series are Quincy Evans of St. Catharines, Jason Faist of Waterloo, Mike Hamilton of Barrie, and Drew Jackson of Caledon.

Linesmen selected to work the series are Mike Harrington of Hamilton, Scott Lawson of Orangeville, Dustin McCrank of Puslinch, and Riley Page of Burlington.