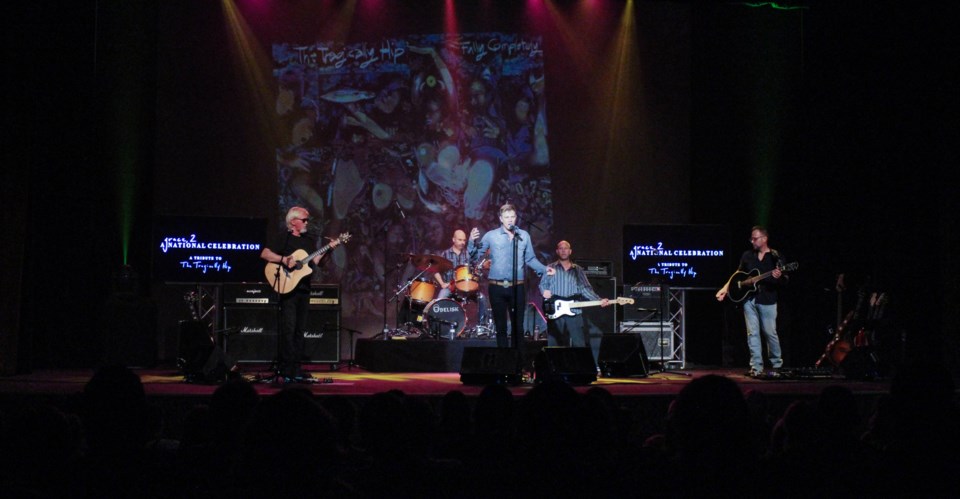 Grace, 2 brings their tribute to the Tragically Hip to the Collingwood stage with a show at the Gayety Theatre later this month. Contributed photo

On a screen in Bobcaygeon, Andy Wehrspann saw the stars of the Tragically Hip reveal themselves one last time, as he watched the band play its final show in Kingston.

Now Wehrspann is reliving that memory in his own way as he tours with Grace, 2, a Tragically Hip tribute band, performing the final show song-for-song on stages in Ontario.

Though Wehrspann didn’t watch the Kingston show live, he did catch two performances of the Tragically Hip’s final shows in Hamilton and at the Air Canada Centre. He watched the Kingston performance live while staying with family in Bobcaygeon.

The final Tragically Hip performance included songs from their newest album, and from past records. The setlist grouped songs together based on which album they were from.

“We wanted to focus on doing a full production, an experience as opposed to just a show, and the framework of the final concert seemed to be able to provide that,” said Wehrspann.

“It started out small,” said Wehrspann. “We just wanted to keep the music going and kind of enjoy the music… we wanted to be the tribute band we would go see if we couldn’t see the Tragically Hip anymore.”

He said neither he nor his bandmates are imitating any member of the Tragically Hip, rather they are celebrating the music.

The band has been playing together for two years, but they’ve been Hip fans much longer than that. For Wehrspann, the Hip’s music has been part of his life from childhood.

Though Wehrspann and The Hip are Canadian, it was in the US where Wehrspann lived out his fondest Hip memories.

While living in California, Wehrspann and some friends followed the Tragically Hip around for a tour from Vegas to Los Angeles.

“What was great about seeing them in the US was the venues were so small,” said Wehrspann. “Instead of the Air Canada Centre, you had this real intimate experience… Being able to see them in these small venues outside of Canada was probably one of my greatest experiences.”

Grace, 2 will perform the final Tragically Hip concert on the stage in Collingwood at the Historic Gayety Theatre on Nov. 23. Tickets are available online here.