'It's an approach whose time has come,' says Sen. Gwen Boniface; Simcoe North MP Bruce Stanton says it 'could be very good public policy'
Apr 29, 2020 9:00 AM By: Dave Dawson 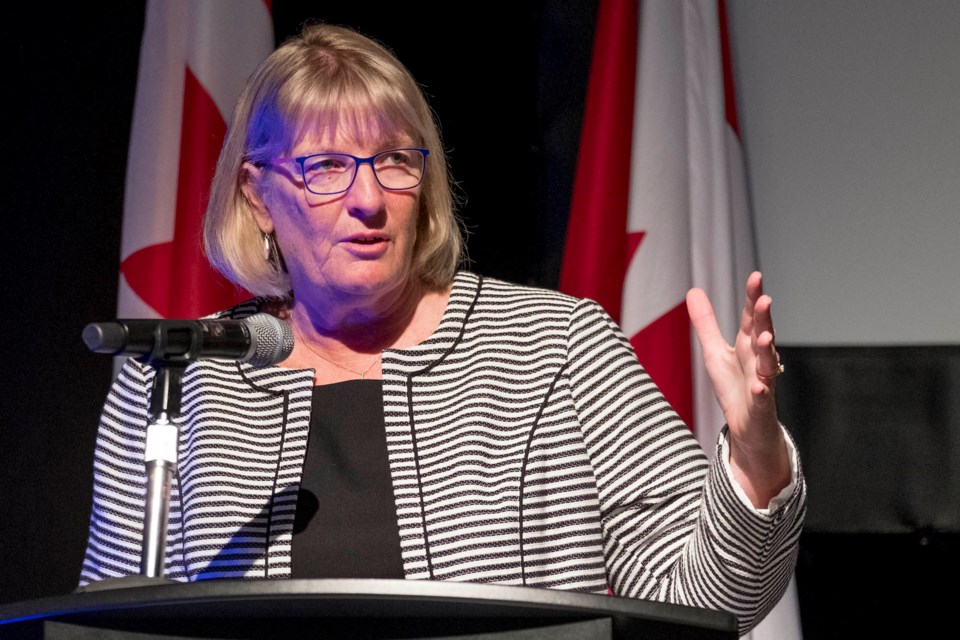 Canadian Senator Gwen Boniface is among a group of senators calling for a basic income. OrilliaMatters file photo

According to a press release, the Senators support the feds’ emergency COVID-19 financial relief efforts but note the Canada Emergency Response Benefit (CERB) fails to provide necessary support to many Canadians who are “falling through the cracks.”

“Restructuring the CERB as a minimum basic income would quickly get support to Canadians in dire straits who need assistance now,” notes the release.

Boniface told OrilliaMatters that all levels of government “have worked hard” to help ease the financial impact of the pandemic.

“The continuing piecemeal approach will, however, still leave many people behind,” said Boniface, a former OPP Commissioner. “The basic income approach has the opportunity to lift people out of poverty. It is an approach whose time has come.”

She said the Senate has been working on this issue.

“Former Senators Hugh Segal and Art Eggleton led some work on this through the Social Affairs Committee prior to my arrival in the Senate,” said Boniface, who was appointed as an independent Ontario senator by Trudeau in 2016.

“An inquiry has begun this session on basic income in the Senate led by Senator Pate. I will have the opportunity to speak to the inquiry when the Senate reconvenes,” she said.

“Based on my reading of this, like Senator Boniface, I am persuaded that it could be very good public policy,” said Stanton.

However, he believes it “would need to be targeted and not universal. Giving the working poor, disabled, and working-age Canadians the ability to live in dignity, the theory goes, would substantially reduce health-care costs, justice system costs and congestion, insurance fees (fewer auto accidents), and mark an improvement in quality of life across society.”

A basic income would likely replace current provincial programs such as Ontario Works (OW) and the Ontario Disability Support Program (ODSP), whose recipients live far below the poverty line.

Some policy analysts estimate a minimum basic income would be in the $25,000 range annually.

Lakehead University student Brandon Rhéal Amyot, who worked with other post-secondary students to pressure the federal government to provide financial relief to students impacted by the pandemic, is among those advocating for a basic income.

Amyot said a basic income or similar program would be an “effective way of lifting millions of people out of poverty.”

Chris Peacock, the executive director of The Sharing Place Food Centre in Orillia, said the idea of a basic income is worth exploring.

“The Sharing Place is always busy in the middle to the end of the month,” explained Peacock. “Why? Because people receive their government assistance (income) at the end of the month. The problem is that this assistance has not kept up with inflation, specifically the cost of housing, and food has increased at a much higher rate than inflation itself."

Peacock said the current level of government assistance “is not enough.”

He said the majority of impoverished people spend what they receive on housing and food. “When that money runs out they need help,” said Peacock.

He said providing an individual or family “with the basic income to afford life's necessities, provides them with opportunity. Once someone has a consistent source of food and a safe place to call home they are provided with a strong foundation to get their life back on track.”

He said such a program would need to be managed correctly.

“The historic data around basic income is not clear,” said Peacock. “We need to create a well thought through pilot program that will provide the data politicians need to make an evidence based decision.”

Doug Ford, soon after becoming Premier of Ontario, cancelled a pilot project that had been started by Kathleen Wynne and her Liberal government.

“Bring back the pilot and let's continue to look for a solution to poverty,” said Peacock. “If a Basic Income is not that solution what is? Be bold and start to test different approaches to help those in poverty,” he urged.

He said ‘big-picture’ ideas are needed to help the most vulnerable.

“Let's fund a bunch of brilliant and innovative minds to establish a social support structure that is smarter and more effective,” suggested Peacock. “Is it base income? Not sure but let's test a few different approaches and figure out what works best.”

Amyot said basic income is one component of a necessary “suite of complementary social programs … that would have to be designed in a way that meets the needs of each region's realities.”

Amyot noted about three million people in Canada are living below the poverty line, with over half of them being in Ontario.

“Poverty is actually costing us money - a strain of over $7 billion on our healthcare nationally, and costing Ontario an estimated $33 billion,” said Amyot.

“A (basic income) would mean giving people the means to live in dignity, with their basic needs met. They would also contribute to local economies, and their mental health would improve significantly,” said Amyot.

“We saw those positive effects starting to play out under Ontario's Basic Income Program. Sadly, the Ford government didn't allow it to play out so we could get a good amount of data.”

Amyot said a basic income program would be beneficial in areas like Orillia.

“In our region, where we face a lot of seasonality in work, this means a more sustainable income for many workers and families,” said Amyot. “As for students, such as myself, it's important to recognize that we all have different situations. With the years of chronic underfunding and cuts to post-secondary institutions as well as OSAP, many of us are making difficult choices about school and work balance.

“It's especially challenging in an increasingly precarious job market, which has seen ‘gig work’  become the norm. That's not sustainable for students, nor for anyone.”

As the world evolves due to the impact of the global pandemic, the time may be ripe for sweeping changes that could include a basic income.

“The fact that half of Canada's Senate was able to agree on such a huge idea is pretty substantial,” said the local Lakehead student. “I would hope that our local MPs and MPPs would seriously consider supporting this idea, not only because colleagues are, but also people right across the country. We can't afford to go back to ‘normal.’ We can't afford not to act. This pandemic should be a wake-up call to leaders to act boldly for a better world.”

“Yes, the spectre of these far-reaching income support programs, all of which are unsustainable in the current fiscal arrangements we have, has opened, or reopened, the discussion on the basic or universal income,” said Stanton.

About the Author: Dave Dawson