Apples, penguins and physics come together for Collingwood grad 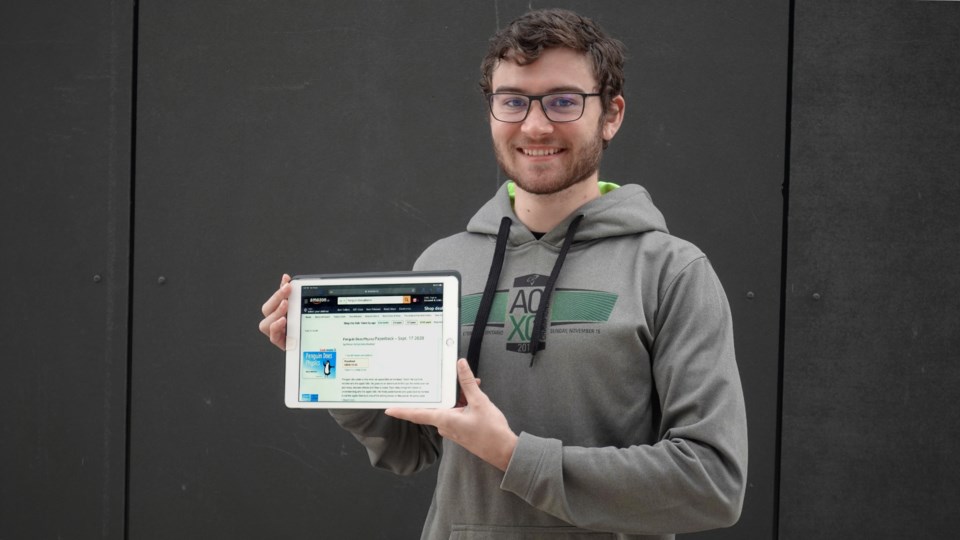 Emrys Halbertsma is a University of Waterloo student and author. Contributed image

A Pretty River Academy graduate has taken his love of science and distilled it into a story of cute animals and fruit.

For this week’s edition of People of Collingwood we sat down with Emrys Halbertsma, 22, a University of Waterloo student and author.

A: My family moved to Collingwood about six years ago.

Q: What brought your family here?

A: I used to go to a Canadian abroad school. (My parents) figured it was a good idea to stay within that same system for my brother and I. Canada seemed like a nice country to live in, for university and for my parents to work.

I had a number of teachers from Collingwood (through that program) that recommended it.

Q: So your family immigrated to Canada six years ago?

A: Yes. We’re Dutch in nationality but we came from the Caribbean, in Saint Martin.

By the time we moved I only had one high-school semester left so I finished that up at Pretty River Academy.

Q: Where did life take you after that?

A: I go to the University of Waterloo for mathematical physics. I’m in my fourth year now.

It’s all online right now, so I’m splitting my time between Waterloo and Collingwood.

Q: You wrote a children’s book. Can you tell me how that came to be?

A: It actually started as a school project for my Grade 11 physics class. It was a project about communicating some of the concepts we had learned; either a video or an article.

I decided to write a children’s book.

There’s a quote by a physicist Richard Feynman. He said something like, if you can’t explain concepts in a very simple way such that pretty much anyone can understand them, then that shows that you don’t really understand the concept.

I always thought that was a really interesting idea. That’s what led to the goal of the book, to make a couple of fundamental physics concepts really easy to understand.

A: It’s called Penguin Does Physics.

It’s about a penguin. An apple falls on his head and he goes on a trip trying to figure out what caused this apple to fall the way it did.

Q: The book is now available for purchase on Amazon. How did you get from writing the book to deciding to publish it?

A: My teacher really liked it and she suggested trying to publish it. It stayed on my hard drive for a few years. (laughs)

A: I would. I really enjoyed the process for creating this book. I drew everything by hand, uploaded it to my computer and digitized it. I was happy with how it turned out.

Maybe in the future I’d be interested in doing a short series on different science concepts.

Q: Do you have other hobbies?

A: Yes, quite a bit. I run and cycle. Through my university, I’m also involved in a student design team that I spend quite a bit of time on.

I’ve recently got into automotive maintenance. (laughs) I like to fix up my car and learn how to do that myself.

Q: What are your future plans?

A: I ask myself that same question. (laughs)

There are a lot of things I find interesting. It depends on what opportunities present themselves.

I’d like to do a master’s degree, probably in math or mechanical engineering. After that, we’ll see.

Q: Is there anything else you’d like people in Collingwood to know about you?

A: I definitely love the area of Collingwood and it was a fantastic place to move to. I’ve made a lot of friends here.

Residential school survivors' group launches petition
Nov 28, 2020 7:00 PM
Comments
We welcome your feedback and encourage you to share your thoughts. We ask that you be respectful of others and their points of view, refrain from personal attacks and stay on topic. To learn about our commenting policies and how we moderate, please read our Community Guidelines.