Altruism a way of life for Mountain View student 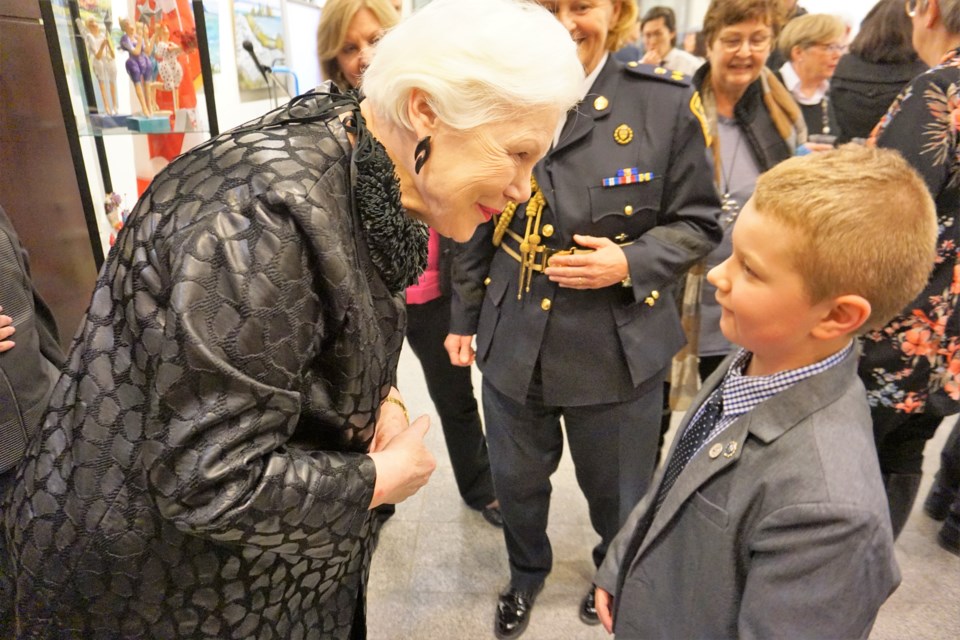 Lt.-Gov. Elizabeth Dowdeswell presents John Perry with a crest pin during her visit to Collingwood in February 2020, recognizing his work with the Georgian Triangle Humane Society and other community causes. Jessica Owen/CollingwoodToday files

It’s never too early to start helping others.

For this week’s edition of People of Collingwood we sat down with John Perry, 10, Mountain View Elementary school student and avid local volunteer.

A: No, I moved here when I was six years old.

Q: What school do you attend?

Q: What are your favourite subjects in school?

A: I enjoy science, history and social studies. I would love to take computer tech, but they don't offer it.

Q: How did you first get involved in volunteering?

A: It started when I was four years old.

I noticed that people in wheelchairs were having a hard time getting around the city I was living in, and I could relate. I have Cerebral Palsy (CP) and walking in snow and over snow banks is not easy for me.

So, I wanted to raise awareness and help fundraise to help.

I raised money for an event called the Roll-a-thon, where people, both disabled and able-bodied, used sit-skis with wheels (for summer use) and did a six-kilometre route through the city.

Q: To what local causes do you volunteer your time?

A: I raise awareness and fundraise to support Ontario Federation for Cerebral Palsy programs.

I was a participant in the Ontario Track 3 Ski Association program, which helps children with disabilities get out and enjoy skiing, from when I was four until I was seven years old.

While in the program, some of my friends in wheelchairs struggled to use the washroom, so I co-chair an annual fundraising event called DiscAbility (disc golf) and we raised enough money in the first year to build an accessible washroom attached to the portable used for the program.

I used to volunteer my time as a food fairy with the Georgian Triangle Humane Society (GTHS), where my mom and I would get up really early and go to the shelter and feed all the cats, but I had to stop because I also have epilepsy and sleep changes affect me. But, I also bake homemade cookies and donate the money to the GTHS.

I also participate in their Friends for Life walkathon each year, where I walk three kilometres (which is a lot for me!) and get sponsors.

I give money I ask for instead of birthday presents each year too.

Q: Why are those specific causes important to you?

A: Well, for OFCP, I have CP and understand the struggles that others with CP may face, so I want to help.

Track 3 was a great program for me to be in to learn to ski, and now I ski independently with my family. I know how much I enjoyed that program, and want other kids to have the chance to as well, and have accessible facilities that they deserve.

For GTHS, I love animals and I think it’s so sad when people are mean to them. They don't have a voice to ask for help, and rely on people who are kind to help them.

I adopted my two cats from there and they're the best!

Q: Have you been recognized for those efforts through awards? What awards have you received?

A: Yes, I received a lifetime membership award to Independent Living Sudbury in 2015, The Ontario Junior Citizen Award by the Lieutenant Governor in 2017, an honour brick at the GTHS in 2018, a character award from the SCDSB in 2018, and the Mona Winberg Achievement Award through the OFCP in 2019.

Q: When the Lieutenant-Governor Elizabeth Dowdeswell came to visit Collingwood last month, she gave you a special pin. What was the pin for? How do you feel to be recognized in that way?

A: The pin was in recognition of my continued work since my Ontario Junior Citizen award, I think.

It felt unbelievable to be recognized again by Her Honour.

Q: What do you want to be when you grow up?

A: A computer software engineer.

Q: Do you think you'll want to stay in Collingwood when you grow up? Why or why not?

A: I would like to stay because I like it here, but there isn't a technology industry here.