Residents turned away at door of packed-to-capacity candidates meeting 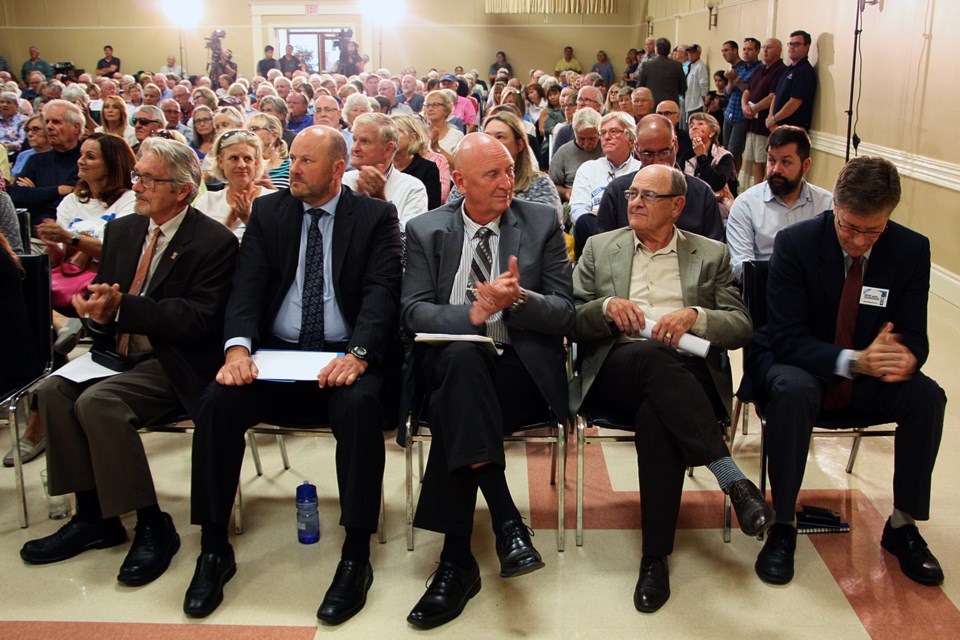 From left: Ian Chadwick, Keith Hull, John Trude, Michael Blair and Brian Saunderson - the deputy mayor and mayoral candidates for Collingwood's 2018 municipal election. Erika Engel/CollingwoodToday
The Collingwood Legion was full to capacity and many residents were turned away from the mayor and deputy mayor candidate question-and-answer session hosted by the Chamber of Commerce last night.

The event, moderated by The Peak’s John Eaton, included questions pre-submitted by members of the community and pulled at random from a glass jar. Candidates were also given three minutes for an introduction.

All five candidates attended. Brian Saunderson, Michael Blair, and John Trude are running for mayor. Keith Hull and Ian Chadwick are running for deputy mayor. The order of speaking was assigned by random draw with Saunderson first.

“Leadership is a key issue in this election,” he said.

Blair followed, suggesting the public wouldn’t be disappointed with any of the three candidates as mayor.

“All mayors can do is lead and recommend,” said Blair. “So this is a leadership job.”

Trude said he loved Collingwood and stressed the importance of working to restore regional relationships.

“My vision … is for Collingwood to once again be seen as great leaders in the region,” said Trude. “I want us to be known as the town that reaches out.”

Hull was the first of the deputy mayor candidates to speak. He encouraged the crowd to vote for the candidate they felt had the strongest decision-making skills.

“Issues come and go, but the ability to make a decision must be a constant,” said Hull.

Chadwick followed and began by saying it was good to see so many people “concerned about municipal government.”

“Given the last four years you have every right to be concerned,” said Chadwick, adding he would champion the return of public advisory committees to increase public participation in local government.

After introductions Eaton pulled questions at random from the jar. The following are those questions and a portion of each candidate’s answer:

What are your thoughts on the judicial inquiry and what will you do with the recommendations?

Blair: “What’s important is to learn from the report and implement the recommendations … If it finds no wrongdoing we need to say sorry to those accused and make sure the findings are widely circulated … if there are wrongdoings we need to hand it over to the prosecutors.”

Trude: “My concern has always been the unknown price tag … Are we going to learn anything we didn’t already know? That’s my concern … But we’re paying for it, we have to use it.”

Hull: “I was part of council when we decided to sell 50 per cent of Collus … In my opinion, I made a mistake and it’s a bad deal for the town of Collingwood … I hope the inquiry will determine it was a bad deal … and we can learn and implement best practices from it.”

Chadwick: “I think it’s good. I believe it will prove to exonerate all the people involved in the process … it is money we didn’t have to spend because it will show nobody did anything wrong.”

Tourism and natural features are big economic drivers in the area, what is your plan to protect green space and water front as growth continues and the town develops?

Blair: “We have to make sure we have a well-drafted official plan with public consultation … the developers are going to follow that.”

Trude: “We have to adhere to the restrictions of the official plan … and we have to make a regional response to save and preserve the natural waterfront and waterways.”

Hull: “We’ve got to be addressing the issue from a regional perspective … we have to be able to preserve those key assets.”

Chadwick: “Maybe if we want to protect it, the town has to own it.”

Saunderson: “We have to work with our regional partners to push back on higher density requirements [from the province].”

What is your 10-year vision for the town? All candidates referenced a growth projection of a 40 per cent increase in the population of the town over the next 11 years, and their answers reflected that growth expectation.

Trude: “It’s important to accomplish the Waterfront Master Plan … there are approximately 52 kilometres of waterfront property in Collingwood and that’s not including waterways … [Growth] will provide an increase in our tax base to allow us to provide services and make sure we’re doing it in a responsible manner to safeguard our natural resources.”

Hull: “My son is 15 years old, I would like every opportunity for my son to leave and if he chooses, he can come back and find a place to live, work and play.”

Chadwick: “We’re going to have to have jobs … we need to attract a mix of population … We’re going to need more commercial development … development growth should be spread through all sectors of the community.”

Saunderson: “The community based strategic plan includes five priorities for growth [the public] has identified … We have to develop an economy that supports our residents.”

Blair: “We need a 10-year financial plan … We need to increase the amount of serviced land for residential and commercial uses … the real key to this is financial management.”

Collingwood needs more doctors, what are you going to do to make sure there are sufficient doctors in town?

Hull: “Healthcare and number of doctors is mandated by the province … but we do have the culture and lifestyle we can use to attract doctors and other healthcare professionals.”

Chadwick: “A public advisory committee would be able to tell us what we need and what would attract doctors … we have to involve the public.”

Saunderson: “We have to leverage our regional partnerships like the one we have with Simcoe County … providing a support structure will be important.”

Blair: “We have to get on with promoting and building a new hospital … a modern hospital will attract doctors to the area.”

Trude: “The number of doctors is designated by the province and Collingwood is not designated [an area in need] … However, when a spot opens up we can engage volunteer committees to start a retention committee to attract a new doctor.”

Are you in favour of a referendum on what to do about the Collingwood Terminals building?

Chadwick: “Yes … public consultation is the key to every major decision … council can’t do it on its own … but I would hate to see a waterfront without the terminals.

Saunderson: “I’m not in favour of a referendum … the waterfront master plan has already identified it is a priority for people … A critical part of the waterfront plan got opinions from the public, and there are many ways to get your opinion to council.”

Blair: “It’s an eyesore and a health hazard and something needs to be done … it would be nice to have a developer who can build a structure that maintains the appearance of the terminals but has commercial uses.”

Trude: “Before we make any determination we have to finish the engineer’s review of the piers and possible contamination of the lands to the north of the terminals … I would be in favour of a referendum in the case where the decision to tear down the terminals was made.”

Hull: “I am not in favour of referendums in general … where do you draw the line? I would like to see the terminals maintained and enhanced and that includes Heritage Drive and Millenium Park … we should ensure it’s a park that’s complete.”

The event ended after those five questions. Rogers TV was filming the session and will be airing it at 11 a.m. on Sunday, Sept. 16. There will be another question and answer session for councillor candidates hosted by the Collingwood Chamber of Commerce at the Legion on Sept. 25 at 7 p.m. Doors open at 6 p.m.

Click the following names for more on each of the deputy mayor and mayoral candidates.