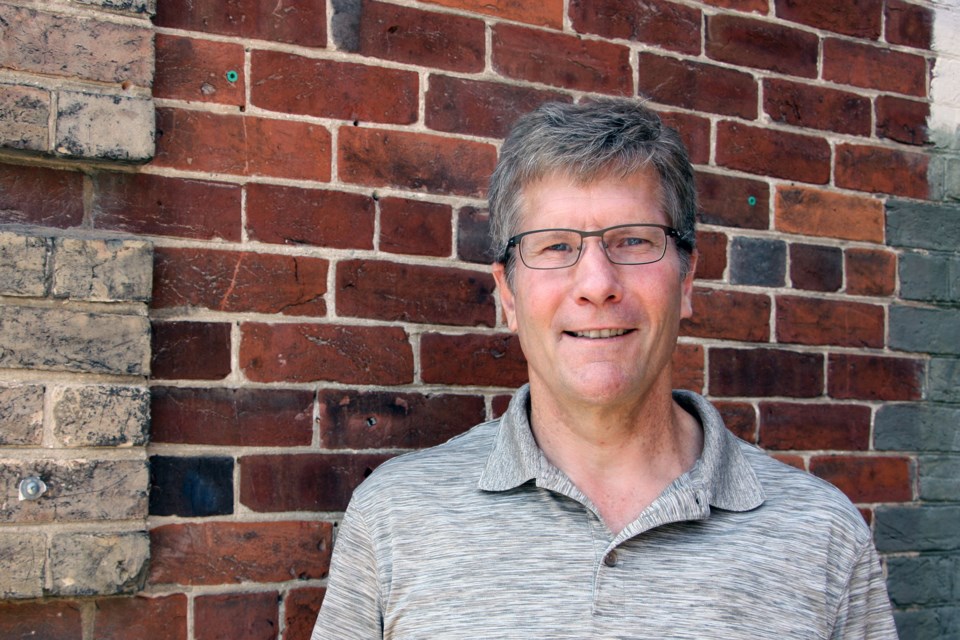 Brian Saunderson is running for Mayor of Collingwood in the 2018 municipal election. Erika Engel/CollingwoodToday

As Deputy Mayor Brian Saunderson looks forward into the town’s future, one he hopes includes himself in the mayor’s chair, he sees more than just a ballot choice for the people of Collingwood.

“I think this is a watershed election for Collingwood,” said Saunderson. “We’re either going to seize the mantle and move forward as a progressive community, or we’re going to get mired in old-style politics, which I don’t think would be helpful.”

Saunderson was elected deputy mayor in 2014, and before that served as a volunteer on the Central Park Steering Committee. He moved to Collingwood with his wife and three sons in 2001 and since then has worked at Christie Cummings law firm while also teaching business law and ethics at Georgian College.

He was drawn into local politics when he watched the council at the time make a decision not to continue pursuing a multi-use recreation facility at central park and instead built two fabric membrane structures for an arena at Central Park and a pool facility at Heritage Park.

“It was more the decision and how it was made that drew me into politics,” said Saunderson. “I felt that Central Park may not have been feasible but we … abandoned the process to early .. and the results have spoken for themselves,” said Saunderson. “I think the public has a right to expect from their politicians complete frankness and disclosure of any interests that a politician might have in a decision-making process … one of [council’s] biggest mandates is to provide services to the public.”

The decision to build the two structures instead of a multi-use recreation facility is now part of the investigation being undertaken for the judicial inquiry into the sale of 50 per cent of Collus shares in 2012 and subsequent decisions made by council on how to spend the money received through the sale.

According to Saunderson, the current council has made progress toward a more transparent and fiscally responsible government, but he said there’s still work to be done.

“In short, I think we need to grow up,” he said. “We need to operate like the big publicly-owned municipal business that we are. And to do that you have to put procedures in place and you have to be open an accountable to the public. As you’ve seen from a number of issues that this council’s been dealing with, I don’t think we’re there.”

Saunderson has opted to run for mayor this time, saying he’s now familiar with the terrain and processes used at both the municipal and county level of politics. He said his experience has given him what he needs to lead the council in setting goals and priorities for the term and for Collingwood’s future.

“In a small community leadership is about setting a target,” he said. “The type of leadership we need is a strong voice and a positive voice. I think we need to offer people a real viable plan.

As deputy mayor, Saunderson had a seat on county council and said he now has a better understanding of how the local and county and other levels of government interface. He thinks the local government can do a better job at leveraging those relationships and improving its own services.

He suggested there are ways to improve customer service and efficiencies through online automation for some services, customer service parameters for others, and increasing communications to make sure the public is engaged.

“Collingwood needs to become healthy, strong and vibrant in every way,” said Saunderson. “And I think there are ways to achieve that, but I don’t think the status quo is going to get us there and I think we need to make significant changes in how we do business at town hall and how we engage with the public.”

Vibrancy, according to Saunderson, comes from having an assortment of housing inventory and public facilities that match the splendour of the outdoor, natural facilities.

“I think what we need to try to preserve is our small-town flavour and our green spaces,” said Saunderson. “But we also have to understand that in a sustainable and affordable community moving forward, there will be changes in the densification, and the province mandates that.”

As voters submit their ballots online and by telephone next month, the issue they face according to Saunderson is not necessarily what transactions have occurred over the past four years, but where the money made from the sale of those assets will go.

“I think we are no longer a Ma-and-Pa store and I think we need to grow into our role and that is a change in culture and I think the public should come to expect government that is responsive ... and that’s not driven by small interest groups,” he said. “We have to be sophisticated … and we have to be very professional. As demands get bigger, we have to be ahead of the wave so when the impact of our decision comes to light, we should not be in a position where we are surprised or caught off guard.”

When it comes to financial decisions, Saunderson said he’d like to see the town continue to pay down debt and be more proactive in attracting business to town and helping existing business grow.

“We’re all Collingwood and the real trick here is to make sure that we preserve what’s important to us about Collingwood, and, at the same time, we evolve because we need to evolve.”

The Collingwood Chamber of Commerce is hosting a meet the candidates event for the mayor and deputy mayor candidates on Sept. 12 at 7 p.m. (doors at 6 p.m.) at the Royal Canadian Legion.

The chamber will be posing questions received by members of the public to each of the candidates during the meeting.

Collingwood mayoral candidate John Trude calls for more forward motion
Sep 4, 2018 3:29 PM
Comments
We welcome your feedback and encourage you to share your thoughts on this story. We ask that you be respectful of others and their points of view, refrain from personal attacks and stay on topic. To learn about our commenting policies and how we moderate, please read our Community Guidelines.