COVID-19: Worries grow that consumers won't come back to malls

Mall owners have a strong incentive to get their properties open safely, as rents have plummeted following the provincial orders to close
May 25, 2020 5:20 PM By: Canadian Press 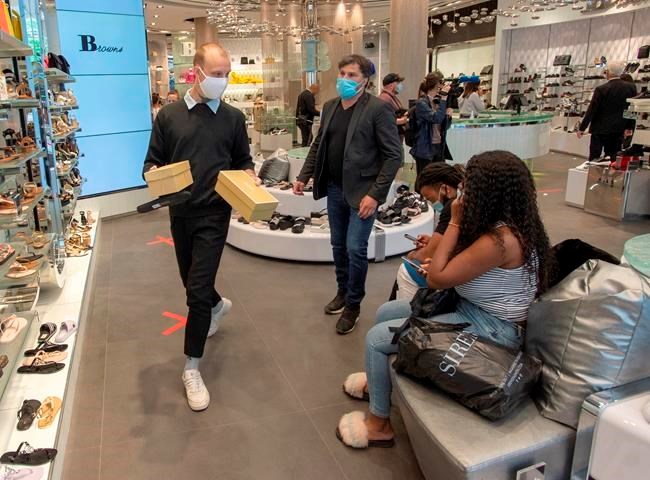 Malls across the country are beginning to open their doors after weeks of government-mandated shutdowns, but both operators and retail tenants are stepping into uncharted territory amid the COVID-19 pandemic.

In the near-term, operators are focused on reopening their properties safely, but there's a larger concern that shoppers — who have embraced e-commerce and curbside pickup since the pandemic's outset — will be unimpressed upon returning to malls as many stores remain closed and new safety measures change the experience.

Sanderson emphasized that the safety measures malls have rolled out, such as one-direction travel, reduced or eliminated seating, physical distancing requirements and increased security to enforce policies, may be detrimental to the shopping experience but are crucial as a resurgence of the pandemic is the worst-case scenario.

"If we re-open business, and then the government has to lock it down again, I think that's just bad for everybody in a whole lot of ways, not just shopping and retail, but peoples psyche and everything," he said.

Mall owners have a strong incentive to get their properties open safely, as rents have plummeted following the provincial orders to close.

Owners were only paid about 20 to 25 per cent of their expected April rent, and around 15 per cent in May.

"There's lots of talk among the retail and landlord community about what rents look like going forward, people have had a major, major impact to their sales."

But he said there hasn't been much progress as nobody's in a position to say what sales will look like, or what rent levels will be affordable.

Mall owners, like many other landlords, have engaged tenants in rent deferrals to help struggling tenants.

Ivanhoe Cambridge has given deferrals to the "vast majority" of tenants "in solidarity with the difficult circumstances," said spokeswoman Katherine Roux Groleau.

Some landlords are stepping in to help in other ways. Brookfield Asset Management, which has extensive mall holdings especially in the U.S., has said it's ready to invest US$5 billion in large retailers to keep them afloat.

The situation could also lead to a return of pure percentage deals, where rent is tied to sales, especially for restaurant tenants, said CBRE Ltd. vice chair Paul Morassutti.

The crisis, however, will likely also accelerate the trend already underway of mall properties moving away from strictly retail, especially as numerous retailers like Reitmans, Aldo, Pier 1 and others go into creditor protection.

"This pandemic has accelerated the timing for some of those stores," said Ray Wong, vice president at Altus Group.

"It's not just the pandemic, they were having challenges before, and this just pushed them along."

He said that while some premier shopping centres like Yorkdale Mall in Toronto will continue to see high demand, others in secondary markets could see an accelerated switch to more mixed used condos and rentals and office, while some in smaller markets might not survive as retail spaces at all.

"Certain malls or certain shopping centres, it may not be viable to have retail there and it may be redeveloped to other types of uses."

The coronavirus outbreak, and the resulting shift to working from home, could also make people more reluctant to take long commutes and will instead gravitate to suburban hubs, like a massive development Oxford has planned for central Mississauga to further the trend of diversifying mall properties.

"It will be really interesting to see the discussion on the office front, with more people working from home, not wanting to do the two-hour commute on the subway, that they prefer locations that are closer to where they live, especially in the suburbs," said Wong.

"It's a constant juggling act to figure out what will work."

This report by The Canadian Press was first published May 25, 2020.

ONTARIO: Government prefers in-class return for students, but health officials must approve
Jul 9, 2020 3:35 PM
Comments
We welcome your feedback and encourage you to share your thoughts. We ask that you be respectful of others and their points of view, refrain from personal attacks and stay on topic. To learn about our commenting policies and how we moderate, please read our Community Guidelines.