On Friday, the ministry of Agriculture, Food and Rural Affairs unveiled a web site with online resources for farmers to help reduce the risk of barn fires
0
Jan 8, 2019 8:00 PM By: Kenneth Armstrong 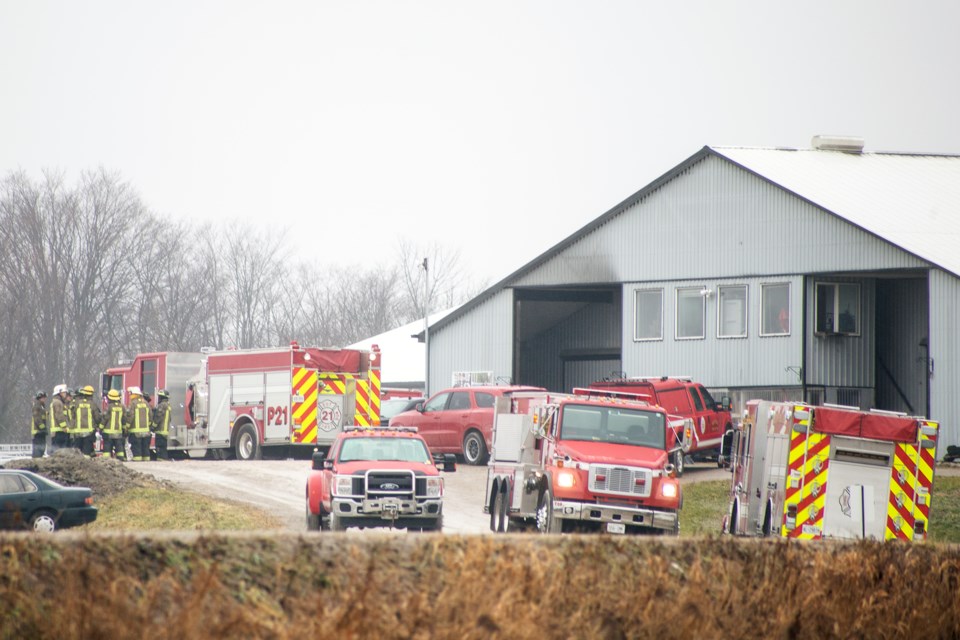 Firefighters on the scene of a recent overnight barn fire at the First Line Training Centre in Milton. Five horses died as a result of the fire. Kenneth Armstrong/GuelphToday

Ontario’s minister of agriculture says he hopes a new public information campaign about the prevention of barn fires will have an impact.

The number of barn fires is not necessarily increasing, but the size of the barns are, said Ernie Hardeman, minister of Agriculture, Food and Rural Affairs in Guelph on Monday.

“The barns are getting larger and larger and more and more animals are (being housed) in it. We think it becomes very important to get the message out that there are things you can do to reduce the risk of a barn fire,” said Hardeman.

“We are seeing a lot of farms where there are 1,000 (animals) in a barn and we lose them all.. They are big numbers and of course no one wants to see animals perish that way,” he said.

Based on data from the Office of the Fire Marshal and Emergency Management (OFMEM), about 80 barn fires are reported each year with an estimated loss of $18.5 million each year.

On Friday, the ministry of Agriculture, Food and Rural Affairs unveiled a website with online resources for farmers to help reduce the risk of barn fires in the winter, when they are most likely to occur.

Hardeman spent 25 years as a volunteer firefighter and retired as captain of the South-West Oxford Fire Department.

“I know if you can see the flames coming through the barn, you had better just make room for that fire to burn itself out because it’s lost,” said Hardeman. “We want to make sure we stop it before the flames are there.”

The web site includes a fact sheet with 10 ways to reduce the risk of barn fires, as well as videos on safety practices surrounding hot works like welding and torching in barns and regarding electrical equipment and wiring.

Bryan Fischer of the OFMEM said many barn fires start accidentally because of outdated or faulty wiring.

“A lot of these barns are old, wiring is old and you have animal infestations, insect infestations that sometimes play havoc with the wiring,” said Fisher.

“Once a barn starts burning, it’s a free-for-all,” he added.

A recent barn fire in Milton that resulted in the death of five horses was investigated by the OFMEM.

It was determined the fire was started due to the block heater of a tractor that was plugged in next to the barn.

WATCH: Ford takes aim at long-term care company CEOs in latest press conference
May 28, 2020 2:37 PM
Comments
We welcome your feedback and encourage you to share your thoughts. We ask that you be respectful of others and their points of view, refrain from personal attacks and stay on topic. To learn about our commenting policies and how we moderate, please read our Community Guidelines.

About the Author: Kenneth Armstrong